Request for zoning change, if granted, would seriously undermine ecological integrity and recreational potential of the Purcell’s Cove Backlands 4April2022

Dear neighbours and friends of the Backlands,

There is some very disturbing news to share with you regarding a very large section of the Purcell’s Cove Backlands.

As a part of the Regional Plan Review, it has been proposed that the Urban Reserve Lands surrounding and including Oceanview Drive be rezoned as Rural Commuter, which would allow limited development. In a nutshell, if this proposal is approved and the land redesignated, 86 housing units could be built on this proposed section of the Backlands (1 housing unit per hectare). 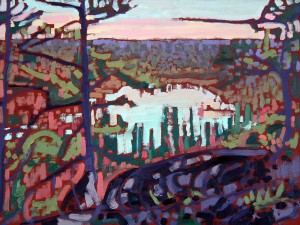 If we wish to preserve and conserve this area of the Backlands, it is critical that we submit a deluge of comments to HRM arguing against this rezoning and making the case for the conservation of this land and its integration with the Shaw Wilderness Park.Here is a link to a map which indicates (in yellow) the area under consideration for rezoning:

The final decision on this particular proposal will be made as a part of Phase 4 of the Regional Plan Review later this year, so we still have time to affect the City’s decision on this. We believe it is very important that we each send a clear message now that there must be NO FURTHER DEVELOPMENT of this area of the Backlands.

Feel free to set forth your own individual concerns when you are submitting your comments. I have also attached the Backlands Coalition submission to the Regional Plan Review from August 2020 for inspiration. There is much to be drawn from it to bolster our case.

Some comments
by David Patriquin 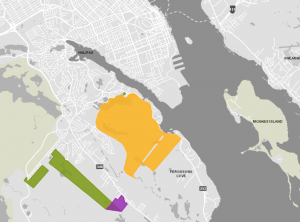 In Yellow: Shaw Wilderness Lands and
the Urban Reserve Lands surrounding and
including Oceanview Drive

The map given in the link above includes  (i)  the Shaw Wilderness Lands, for which the proposal* is to

*These proposals are contained in the  Regional Plan Review: Themes and Directions What We Heard (HRM Regional Council Dec 14, 2021), pages 44-46; or view the relevant content here as a jpg image or pdf.

The two sets of properties are combined in the map because both are currently under the same zoning, but two different designations are now being sought. 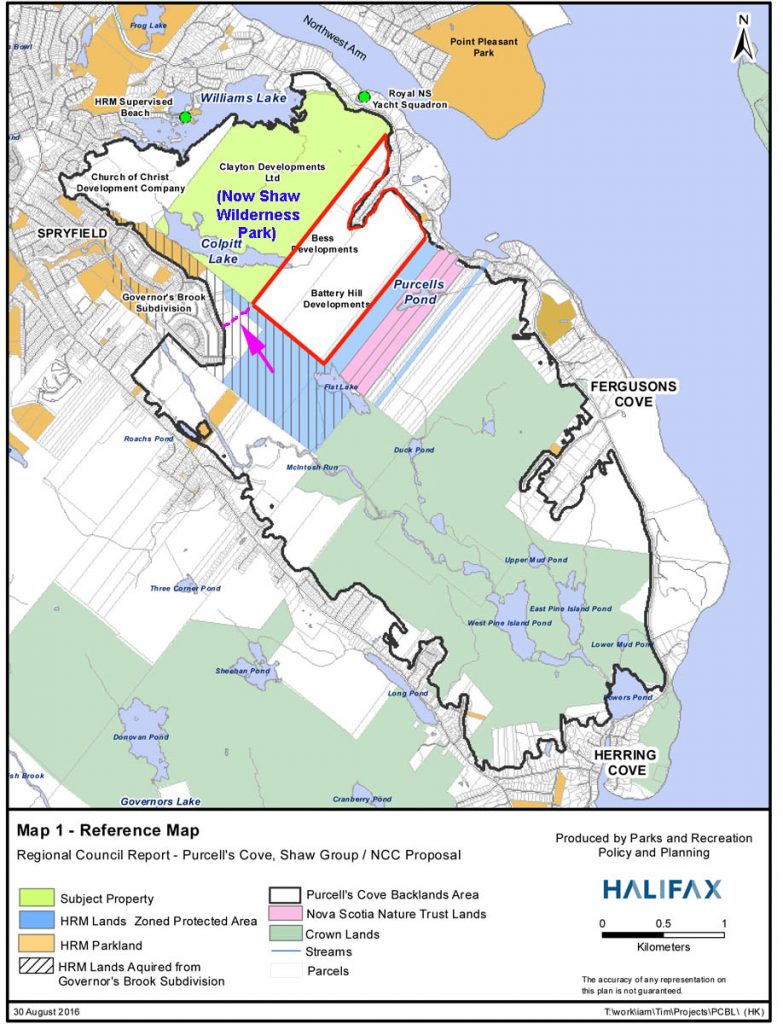 Map showing ownership of the Backlands in 2016. The ‘Oceanview Urban Reserve Lands’  are outlined in red. To the Northwest in bright yellow-green are the Clayton development lands which are now the Shaw Wilderness Park (SWP). The blue parcels to the southeast and southwest are are HRM zoned Protected lands, then there are the Nature Trust Lands (Purcell’s Cove Conservation Lands) in pink. The green lands are undeveloped Crown lands, and the white lands within the boundaries of the Backlands are private but currently not-developed lands, The arrow  points to what  would become a bottleneck or pinch point between the SWP lands and the rest of the Backlands if the Oceanview Urban Reserve Lands were developed. Map modified from that given in Purcell’s Cove Backlands – Shaw Group/Nature Conservancy of Canada Proposal Item No. 14.1.8 Halifax Regional Council September 20, 2016

Currently, the only notification about the ‘Oceanview Urban Reserve Lands’ is that cited above, which is confusing to say the least.

What happens on this block of land has significant repercussions for the Backlands* as a whole and so it should be vetted as such with notifications for all of the surrounding communities and recreational and conservation groups affected. Those would include people on Peninsular Halifax, as the Backlands are a popular recreational area for many individuals and families living on the Peninsula (myself and family included!).

Below I comment on two aspects – Ecology/Natural History, and Recreational Use – which illustrate why we should be considering any proposals for development of currently undeveloped lands with the Backlands in the context of the whole of the Backlands. I make these comments as a biologist and author or co-author of several studies on the ecology of the area* and as an active past or current member of several local natural history and trail groups that make use of the area.
*-Nick Hill and David Patriquin. 2014. A Rare, Fire-Dependent Pine Barrens at the Wildland-Urban Interface of Halifax, Nova Scotia. Slideshow presentation to the Wildland Fire Canada 2014 Conference, Halifax, N.S. Oct 6-9, 2014
– Hill, N. and Patriquin. D. 2014. Ecological Assessment of the Plant Communities of the Williams Lake Backlands. Report to The Williams Lake Conservation Company. A publication of the Williams Lake Conservation Company
– Patriquin, D. 2016. Water quality measurements on Williams Lake and Colpitt Lake (Halifax, N.S.) Dec 7-13, 2015 with reference to possible impacts of road salt. Report to Williams Lake Conservation Company, Halifax, Nova Scotia, 39 pages.
– –Species List for the Purcell’s Cove Conservation Lands: 2012 Update Submitted to Nova Scotia Nature Trust Sep. 14, 2012. David Patriquin, Bob McDonald, Burkhard Plache
–  Regeneration of Forest and Barrens after the Spryfield Fire
–(Photos and text from a talk given to Halifax Field naturalists on Sep. 2, 2010)

It is a remarkable piece of wilderness situated within an urban framework, just off of the Halifax Peninsula. It is a mosaic of lakes, streams, wetlands, forests, bushlands, rock barrens and pine barrens.

The Backlands host at least 7 distinct upland plant communities and 7 distinct wetlands and other sites of water storage or channeling.The mosaic of barrens, forests and wetlands close to the coast make the area very important habitat for nesting and transitory migratory birds. It has a dramatic geological structures including large rock outcrops ringed around their tops by Jack Pines (pic below), boulder fields, fields of whalebacks, massive erratics, a contact zone between intrusive granites of the south Mountain batholith and folded metamorphosed Halifax Group black slates and siltstones of the Meguma Supergroup. 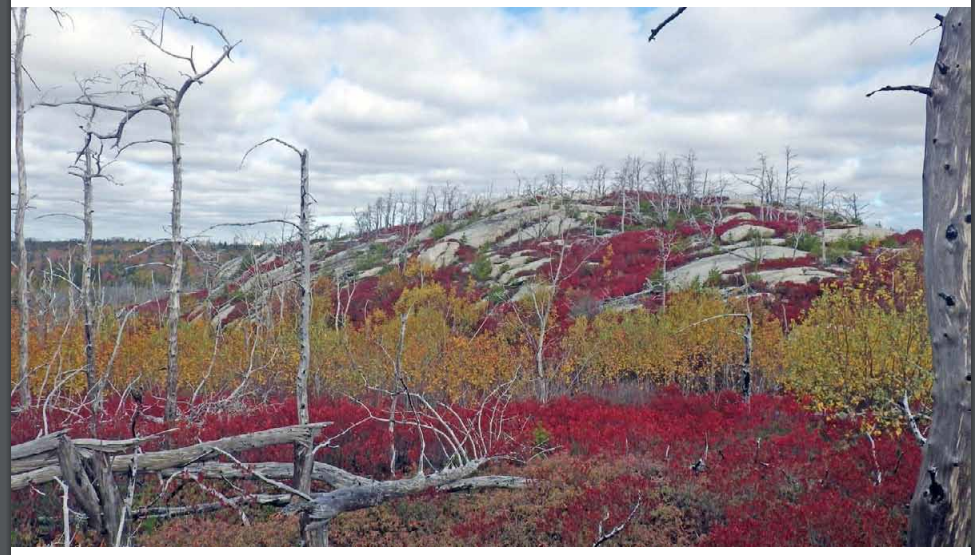 There is also a lot of recent industrial history in the backlands to celebrate and protect, e.g., the first industrial railway in the Maritimes, the old quarries and more. Not so well known, but importantly, we are gradually learning about a significant presence of indigenous people in the area.

Fragmentation The Backlands are a relatively small area, and any loss or fragmentation of what currently remains undeveloped could have a disproportional impact on the Ecological Integrity of the Backlands ecosystem as whole, and particularly on the pine barrens. The proposed development of the ‘Oceanview Urban Reserve Lands’ is a case in point as it would create a significant pinchpoint in the connectivity of these lands – see the arrow pointing towards the potential pinchpoint in the map above.

Hydrology On this rough, bouldery landscape, more than 80% of water drains via seasonal and underground watercourses that are not protected by legislation.* The proposed developments would disrupt hydrological processes that maintain the lakes and wetlands, notably Flat Lake and Purcell’s Pond. *See Section 7 pp 48 ff in Ecological Assessment of the Plant Communities of the Williams Lake Backlands

Fire: an important consideration. The pine barrens host a nationally unique and globally rare vegetation type, the Jack Pine-Broom Crowberry Barrens. Like other pine barrens in N.A., they are adapted to repeated fires and occur on landscapes prone to repeated fire. We leaned that the hard way in 2009 when approx. 800 ha burned within about 24 hours. 8 houses burned to the ground, more partially. Those homes had been built integrated into the natural landscape, without apparently, any recognition that it is a fire prone landscape. When the neighbourhoods were rebuilt, fire-smart practices were introduced, including large treeless borders, clearing of natural vegetation, fuel etc. making those neighbourhoods no longer part of the natural ecosystems and effectively fragmenting the natural habitats. Across the way, the Governor Brook’s development completely pulverized the barrens to build houses.

In short, there is no model of development within the contiguous Backlands that is compatible with maintaining the natural habitat and connectivity and living with some level of fire within the undeveloped Backlands.* The proposed developments would both destroy habitat and fragment the larger area of the Backlands.

*”Living with some level of fire”: we already do. Small fires occur every year in the Backlands and are put out fairly quickly. Those fires serve to regenerate the pine barrens communities and also reduce the accumulated tinder and the threat of really large fires such as the Spryfield fire of 2009 which burned approx 800 hs of the Backlands (area approx 1350 ha). We need to develop a more deliberate fire strategy that both recognizes the fire-dependent and fire conducive nature of the Jack Pine/Broom Crowberry Barrens, and reduces fire risk to neighbouring communities. This is possible if development is limited to the periphery of the Backlands, but not if there are many settled incursions into the Backlands. See Section 8.2 pp 78 ff in Ecological Assessment of the Plant Communities of the Williams Lake Backlands. 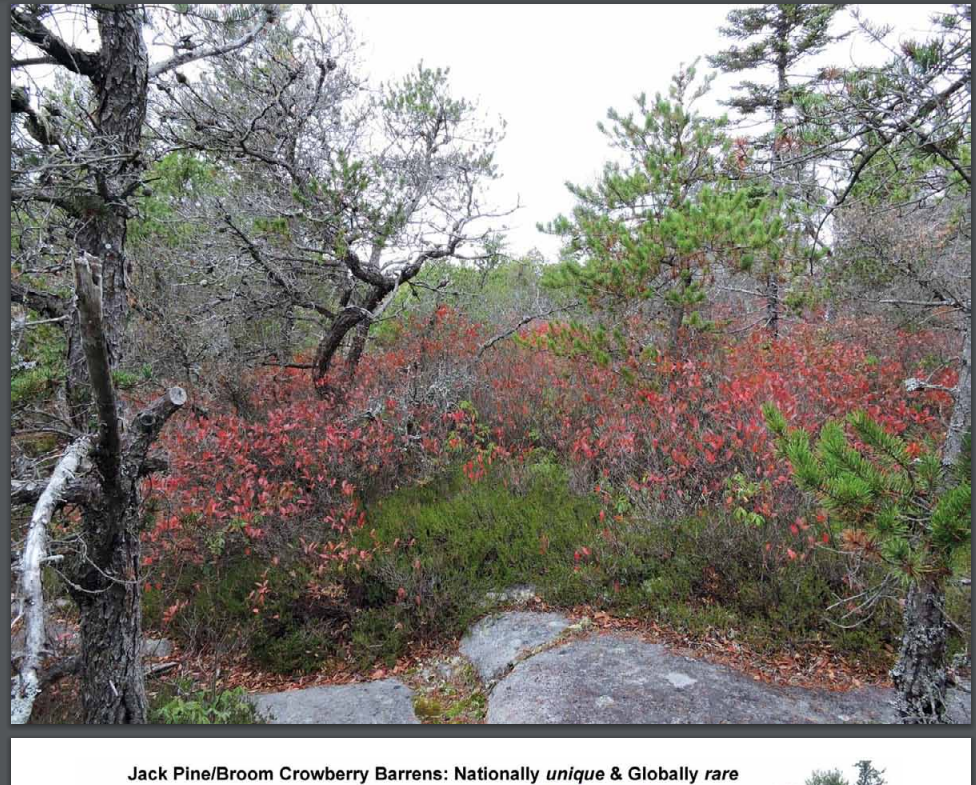 There is also lots of  recent’ industrial history in the backlands, e.g., the first industrial railway in the Maritimes, the old quarries and more. Not so well  known, but importantly, we are gradually learning about a significant presence of indigenous people in the area.

We have yet  to realize its potential for tourism. People will visit these areas for the wilderness experience, bird watching, hiking, biking, forest bathing and the like, but not to look at nice homes throughout it.

The Backlands are also an invaluable resource for citizens who live in high density neighbourhoods on the Peninsula, only minutes away. It’s part of what attracts people to come to live and work in the Halifax area.

Why would we give up this asset to all of us for the sake of 81 upscale houses that could be readily built in areas not requiring such tradeoffs? 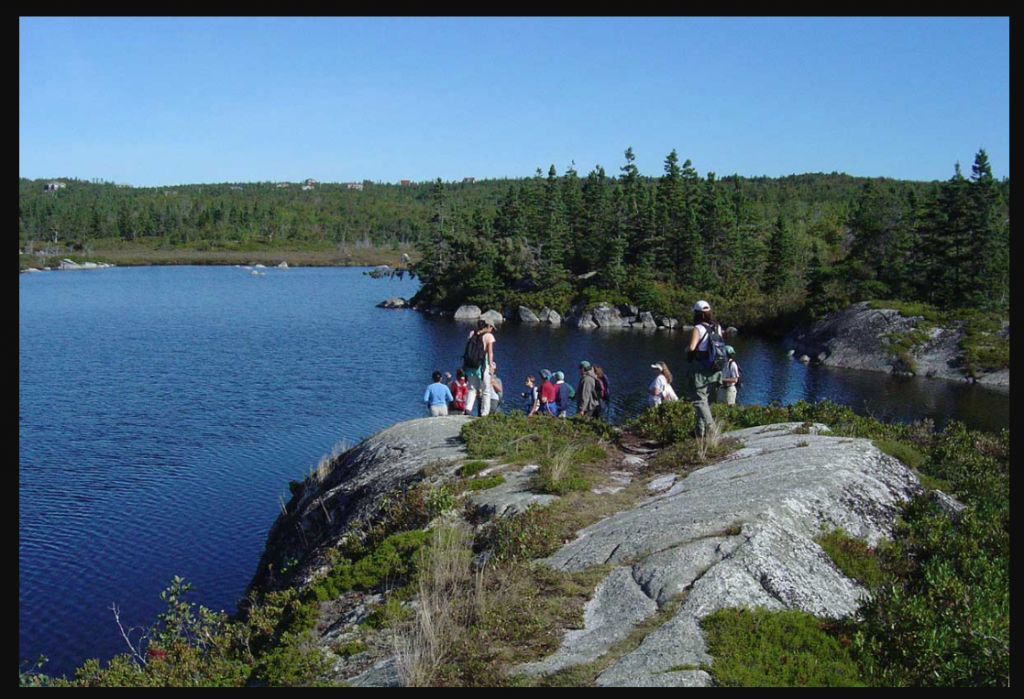 OPINION: Act locally to stem global habitat loss
Hohn Fleyon saltwire.com, May 11, 2019. “While it’s just one example, the Halifax Wilderness Park could be a model for other cities and towns seeking to protect more of their natural heritage, improve the quality of life for their citizens and reverse the devastating decline in plant and animal species highlighted by the UN report.”

Ecological Assessment of the Plant Communities of the Williams Lake Backlands
A Report to The Williams Lake Conservation Company (Feb 13, 2014) “While the survey focused on these lands, many of the findings apply to the larger Purcell’s Cove Backlands. It is noteworthy that the authors advance some novel perspectives on the ecological values of the area. The issues of fire management and wetland protection require attention and discussion by the larger community” says Kathleen Hall of the WLCC.

Flora, Fauna & Geology of the Backlands
Pages on this website 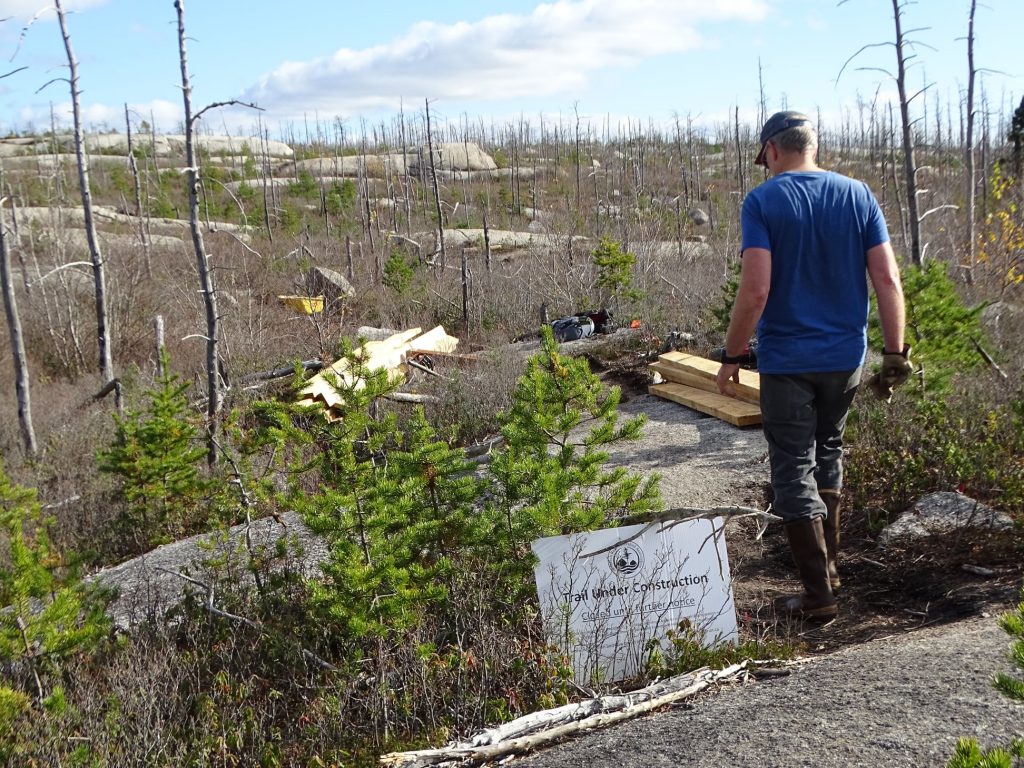 Volunteers with the McIntosh Run Association working on bike and walking trails
in an area of whaleback barrens regenerating after the 2009 Spryfield fire,
Nov 7, 2021

This entry was posted in Community, Conservation, HRM Greenbelt, Parks and Protected Areas. Bookmark the permalink.