Most of these maps are screen captures from selected layers in the Nova Scotia Landscape Map Viewer which is a convenient tool for viewing Crown lands, Protected Areas, Ecological Land Classification, Forest Stand characteristics, Property Boundaries & PID numbers, Roads, Wetlands  and  more. It provides a lot of the information otherwise only available via specialized GIS files and software. (DNRR: NS Department of Natural Resources & Renewables).

There is a Help Page. Other info. can be found in a Photo Interpretation Specifications document, and in this document:  Nova Scotia Interpreted Forest Inventory – Current Forest Data (Web version -2021).

The maps are based on Photo-interpretation/landscape models and there can be significants errors at the gound level, e.g.,   in tree species ID. The maps below are based on 2017 imagery. 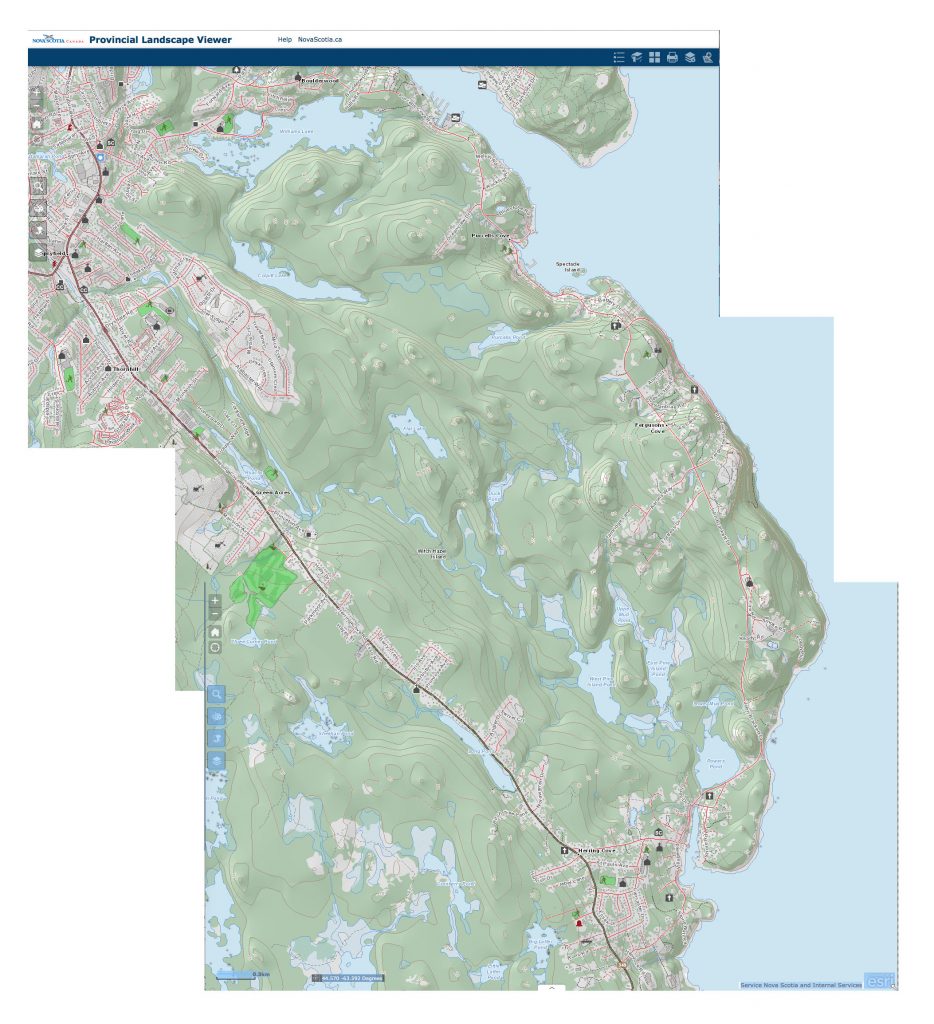 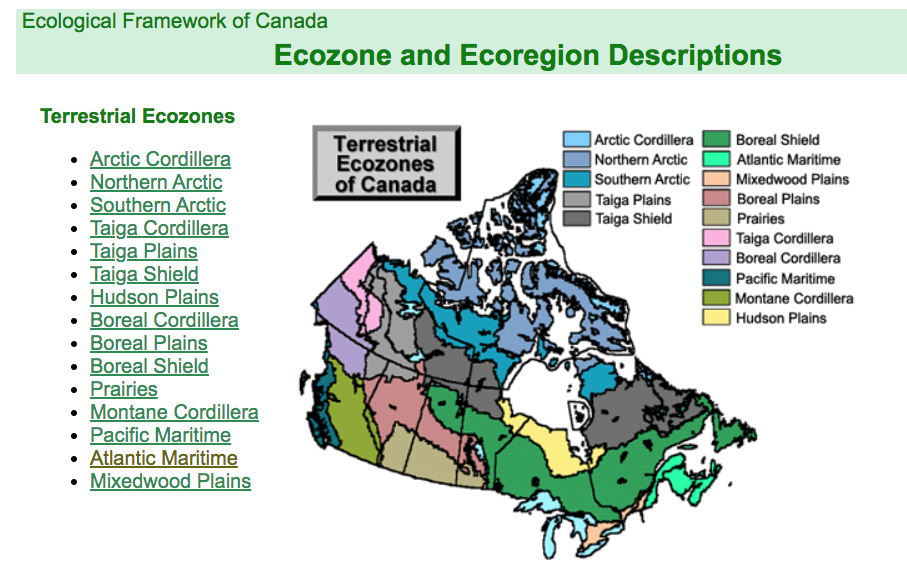 EcoZones of Canada: We are in the Atlantic Maritime Ecozone 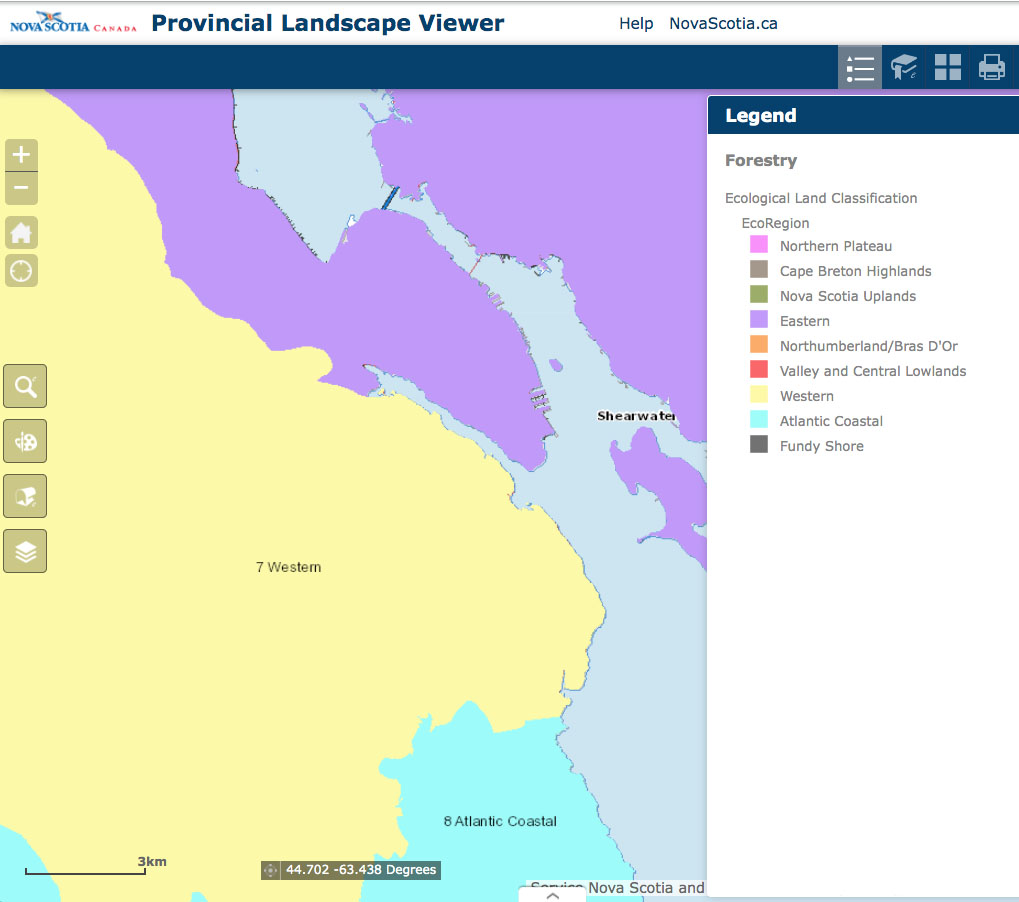 Ecoregion: We are in the Western EcoRegion. EcoRegion is “the second level of the Ecological Land Classification for Nova Scotia, and a subdivision of ecozone. Used to characterize distinctive regional climate as expressed by vegetation. There are nine ecoregions identified in Nova Scotia.” 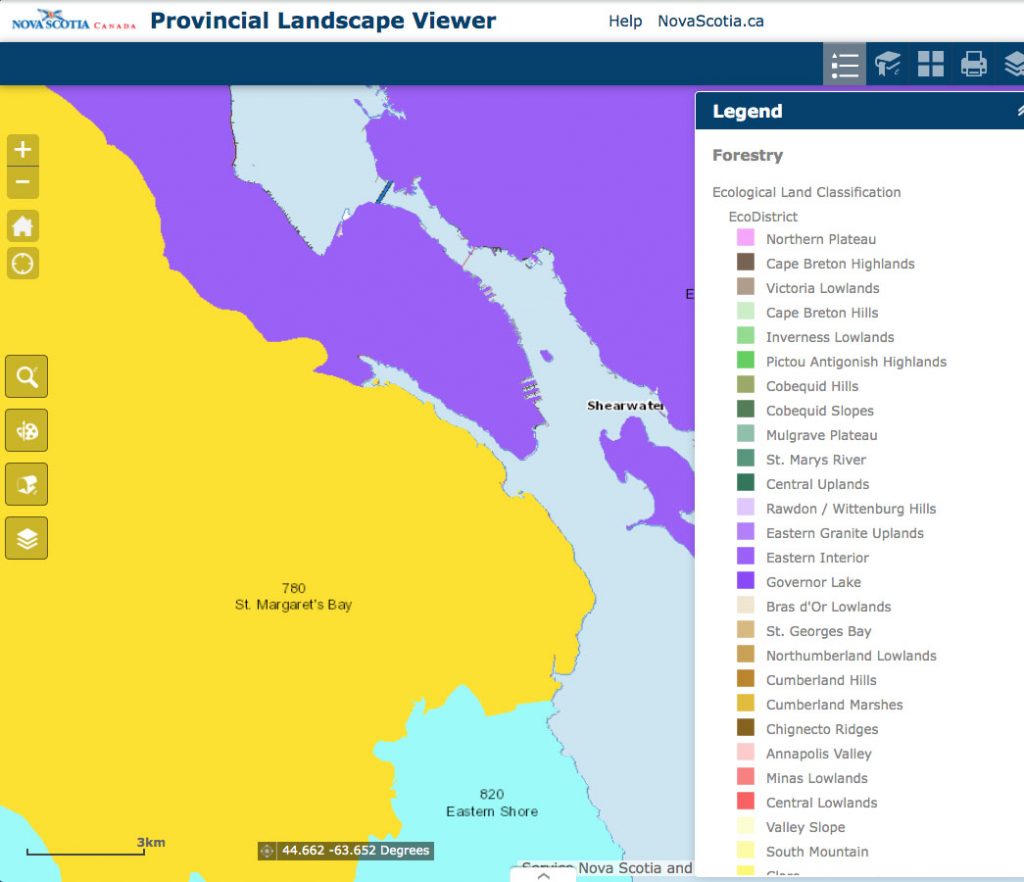 Ecodistrict: We are in Ecodistrict 780 St. Margaret’s Bay. EcoDistrict is “The third of five levels in the Ecological Land Classification for Nova Scotia, and a subdivision of ecoregions. Characterized by distinctive assemblages of relief, geology, landform and vegetation.” There are 39 EcoDistricts in NS. 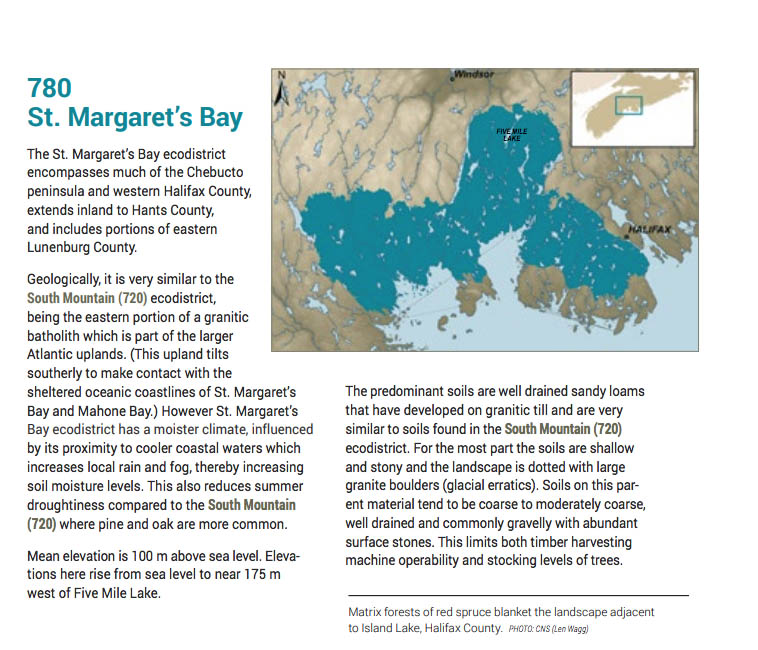 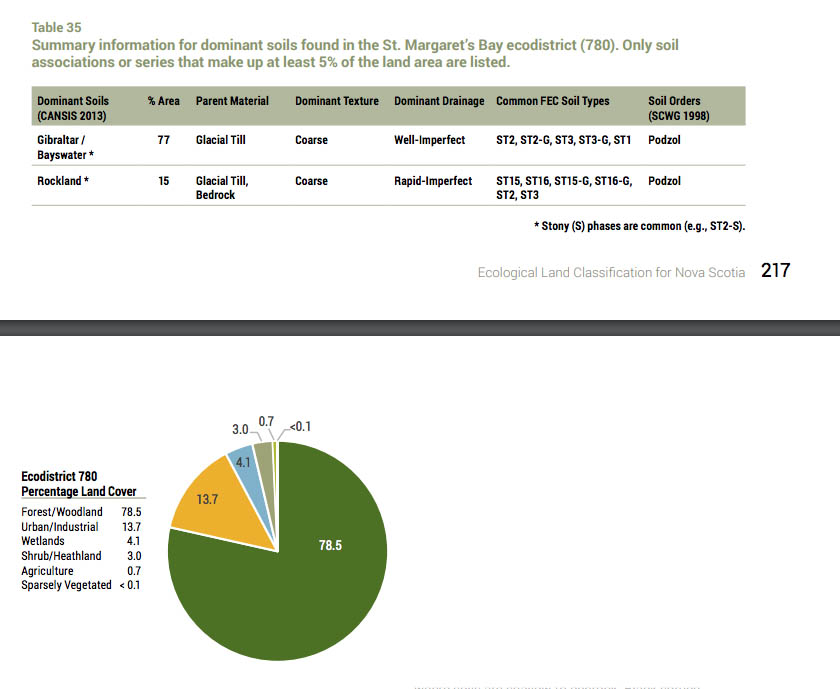 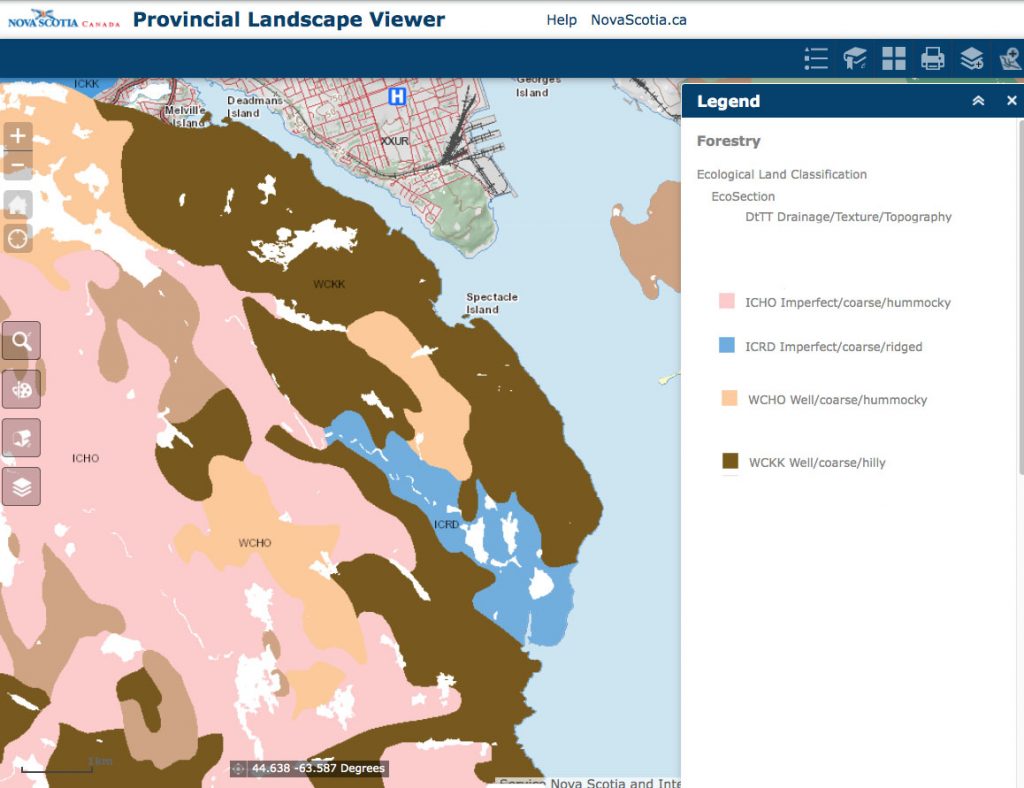 Ecosections: 4 EcoSections are identified. EcoSection is “The fourth of five levels in the Ecological Land Classification for Nova Scotia, and a subdivision of ecodistricts. An ecological land unit with a repeating pattern of landform, soils, and vegetation throughout an ecodistrict.” Note that “* Ecosections and ecosites are the only two types of units that are not coded uniquely within higher order levels of the ELC” See NS ELC 2010  page 13. Also view on this website, screen captures from the provincial interactive ELC Map. 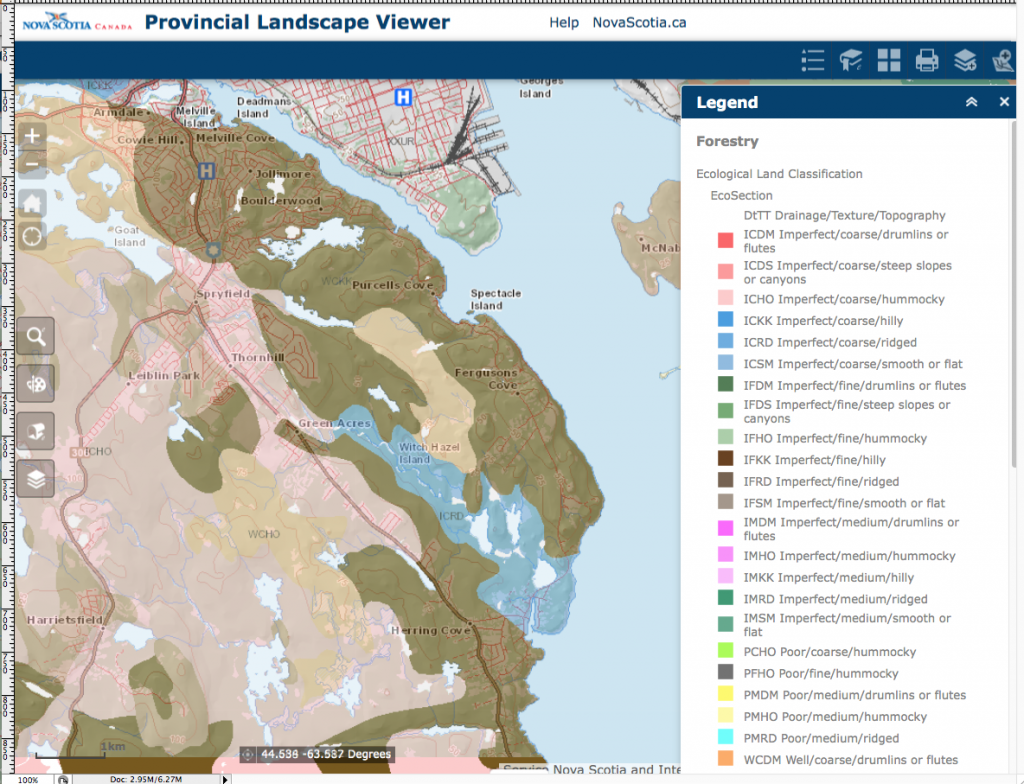 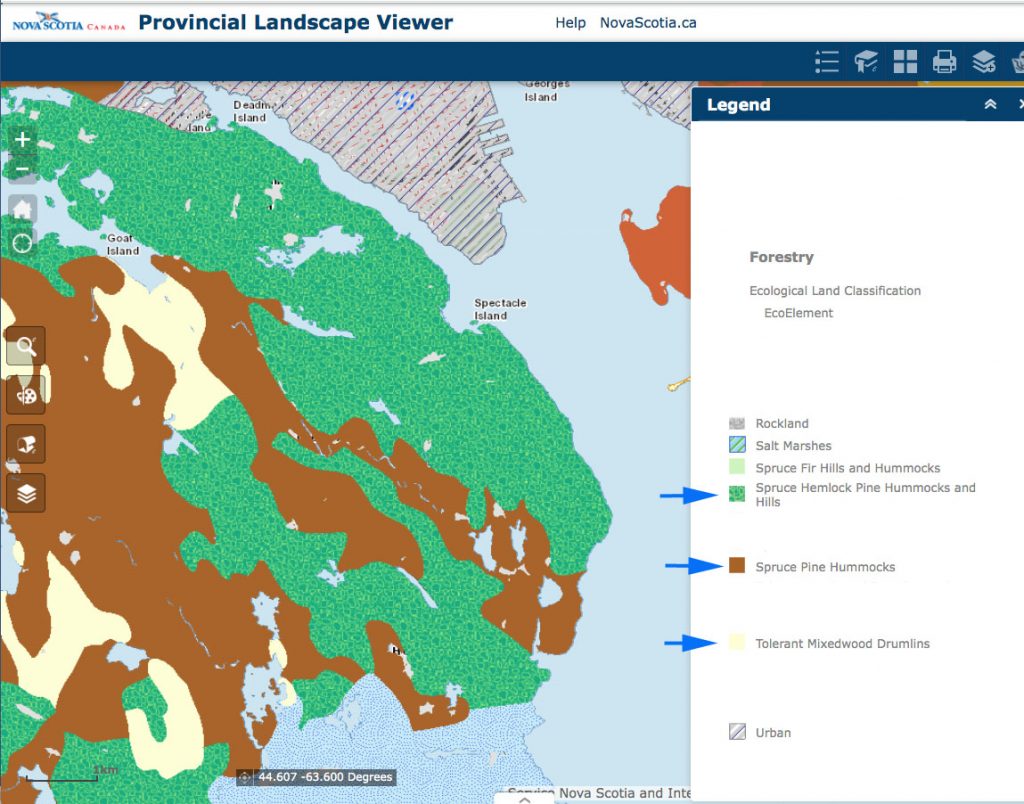 EcoElement. Only two are within the Backlands. EcoElement is ” A landscape ecosystem containing characteristic site conditions that support similar potential vegetation and successional processes. Elements were mapped by combining ecosections with similar climax vegetation and natural disturbance interpretations. ” “EcoElement” is a curious designation/level, used I believe because EcoSites – formally the fifth level in the ELC – have not been mapped in detail for the province. They are not the same, EcoSite would be at lower level than EcoElement.  An EcoSite represents “A uniformity of parent material, soil moisture and nutrient regimes and vegetation as expressed by slope, slope position, aspect and exposure” (NS ELC, 2010). We would expect there to be more than 2 types of EcoSites, perhaps 7,  in the Backlands. See Forest Ecosystem Classification for Nova Scotia, Part III: Ecosites 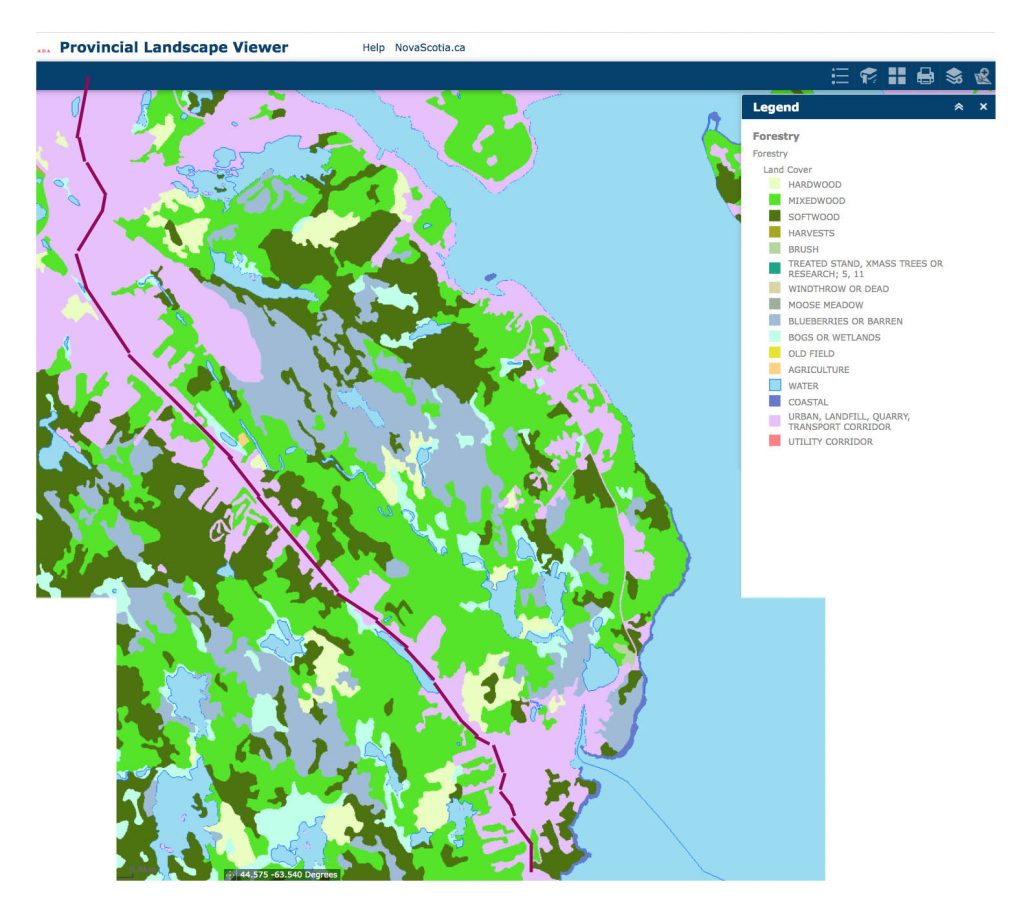 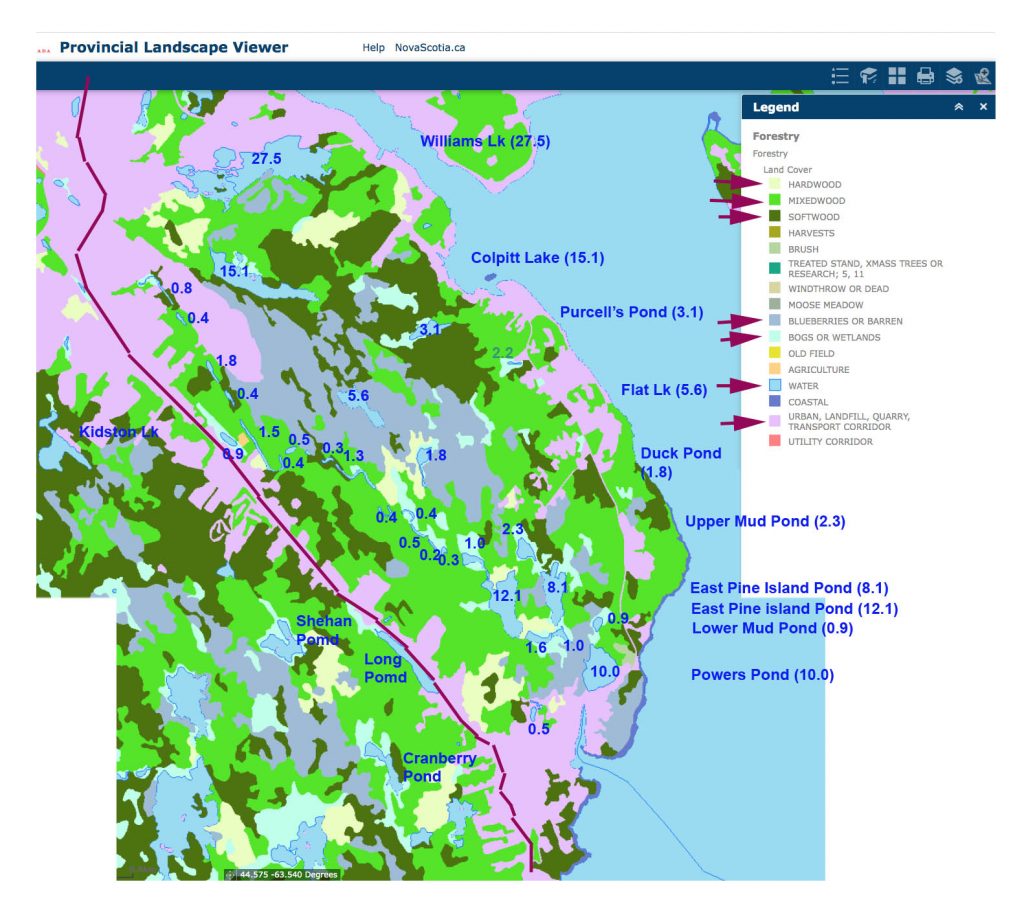 Landcover and Lakes (Areas of Lakes in hectares inserted) 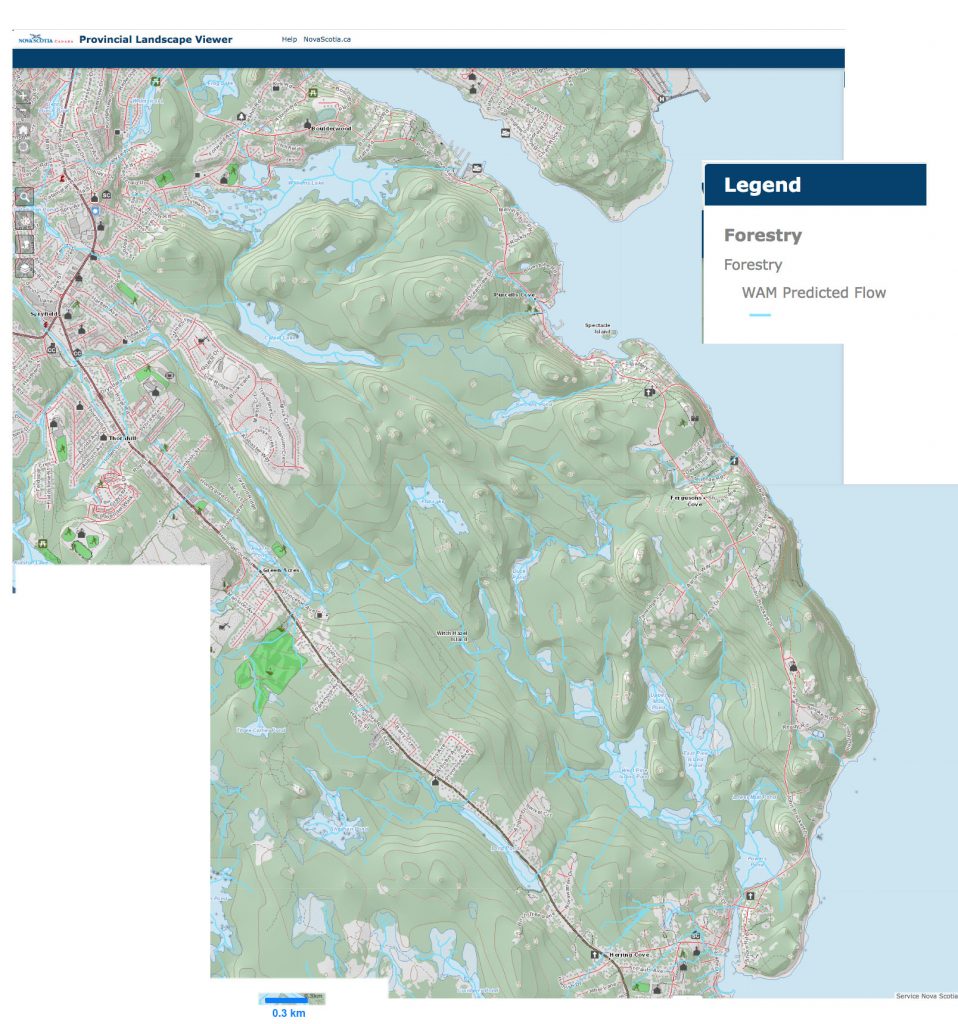 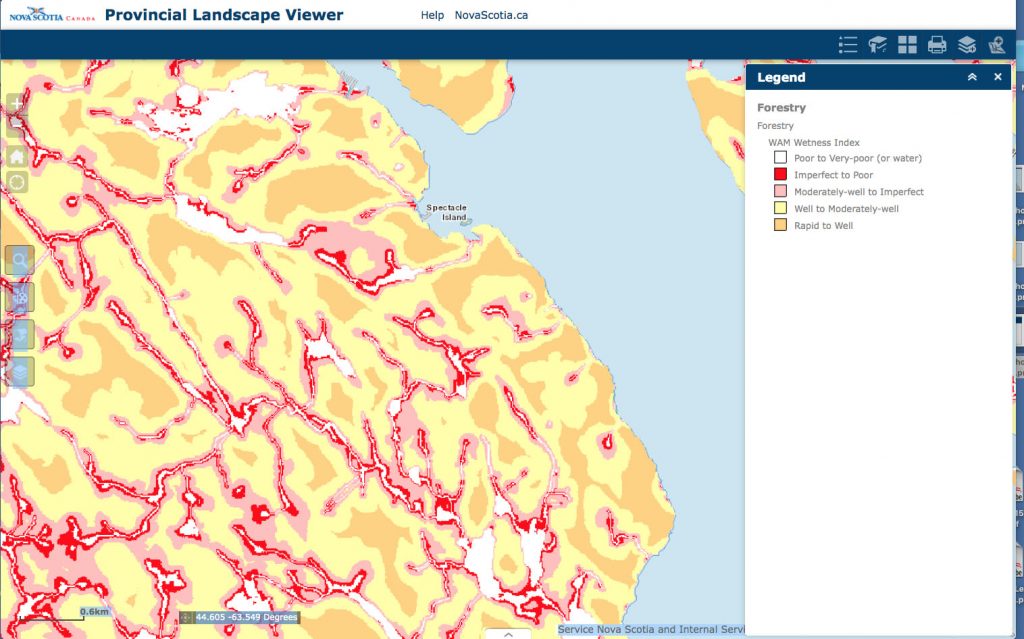 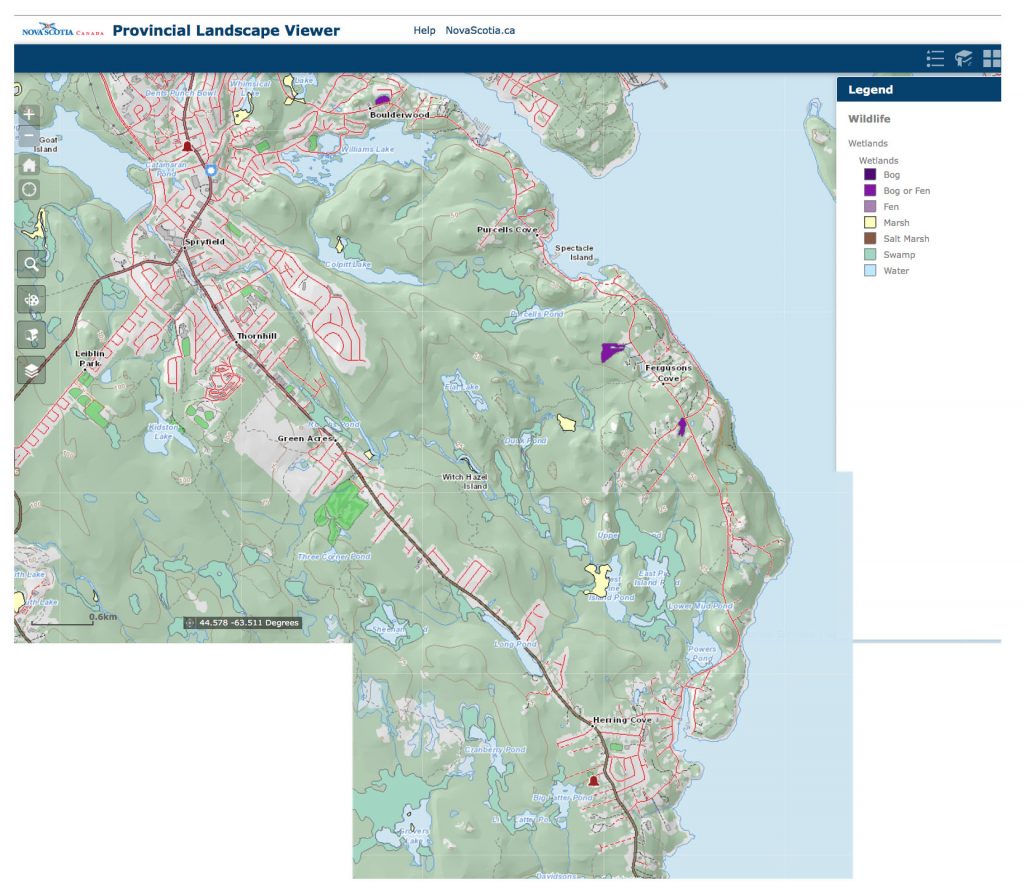 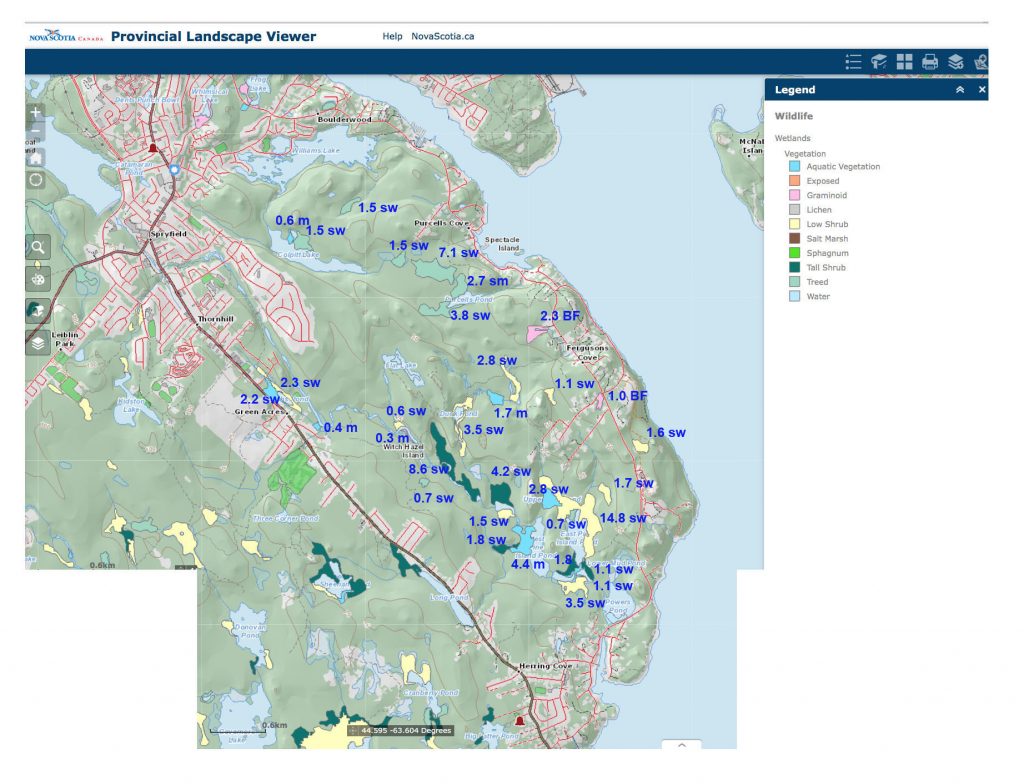 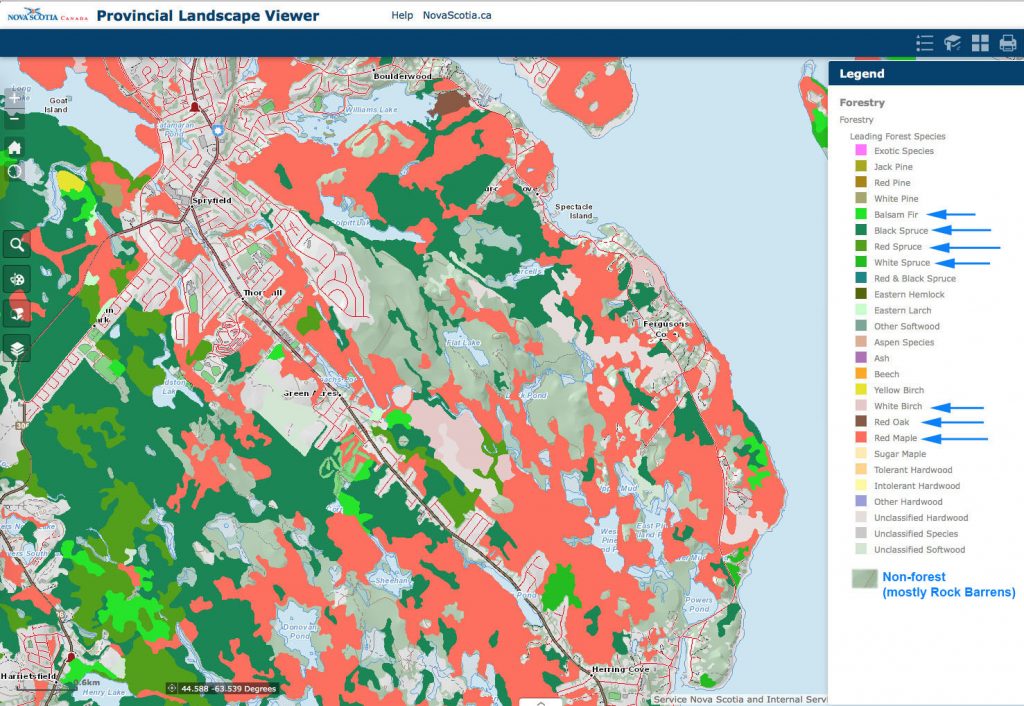 Leading Forest Species
Ground-truthing shows that Jack Pine/Broom Crowberry communities, corresponding to NS Forest Vegetation Type OW1 occur over much of the Rock Barrens, a lot of which burned in the 2009 Spryfield Fire and is now regenerating – DP 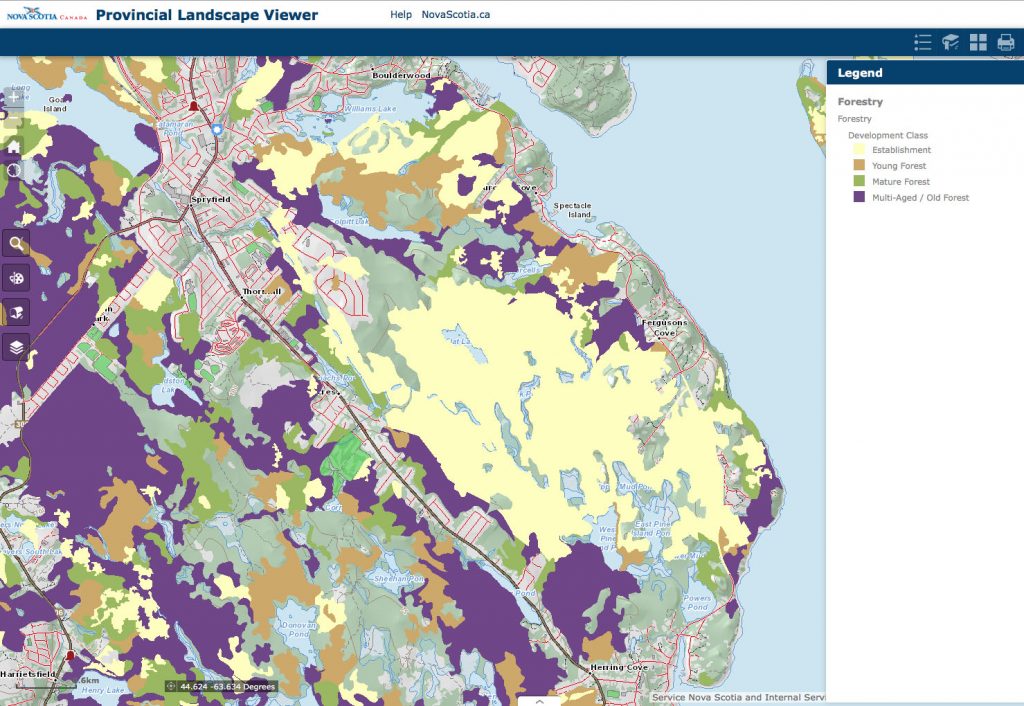 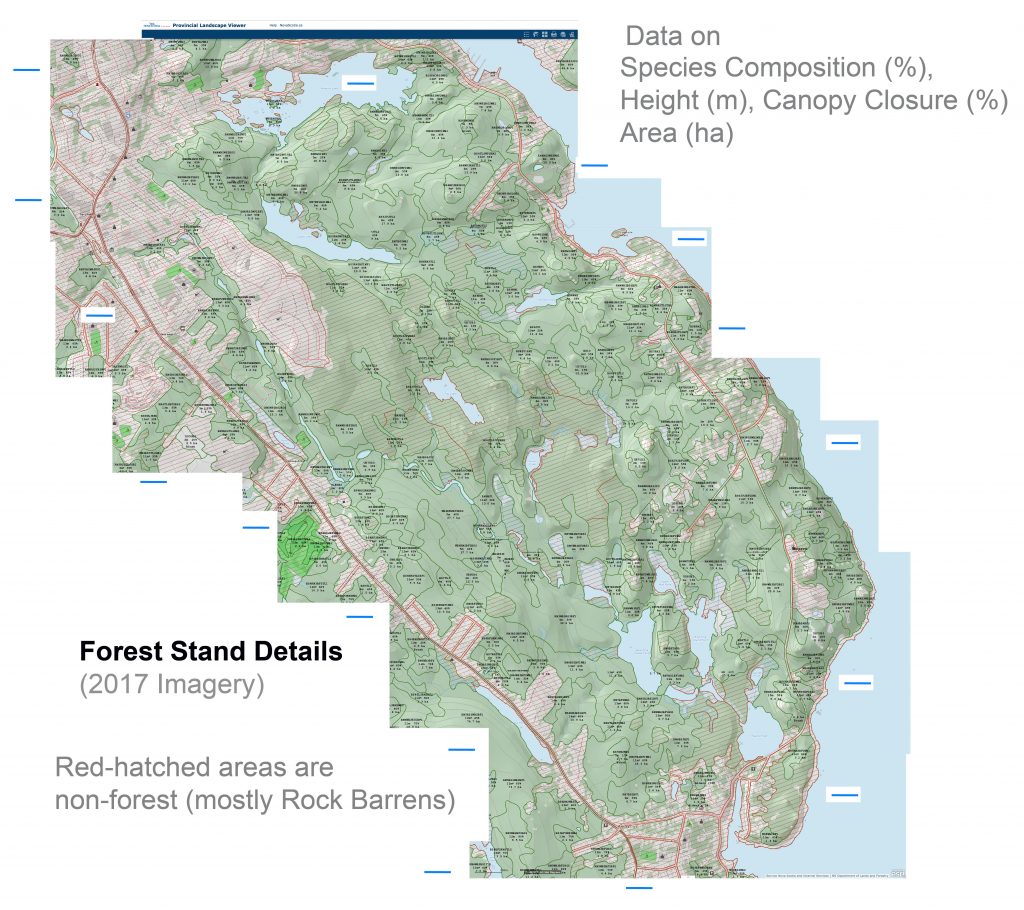 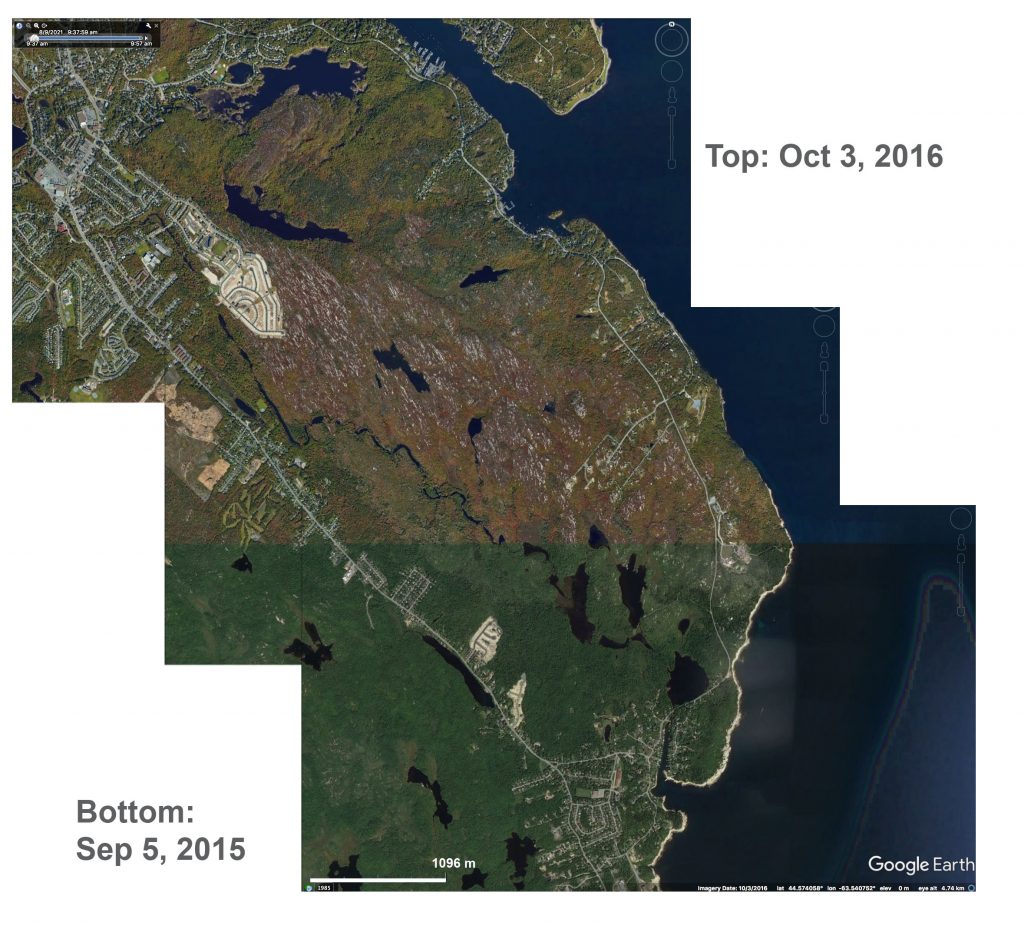 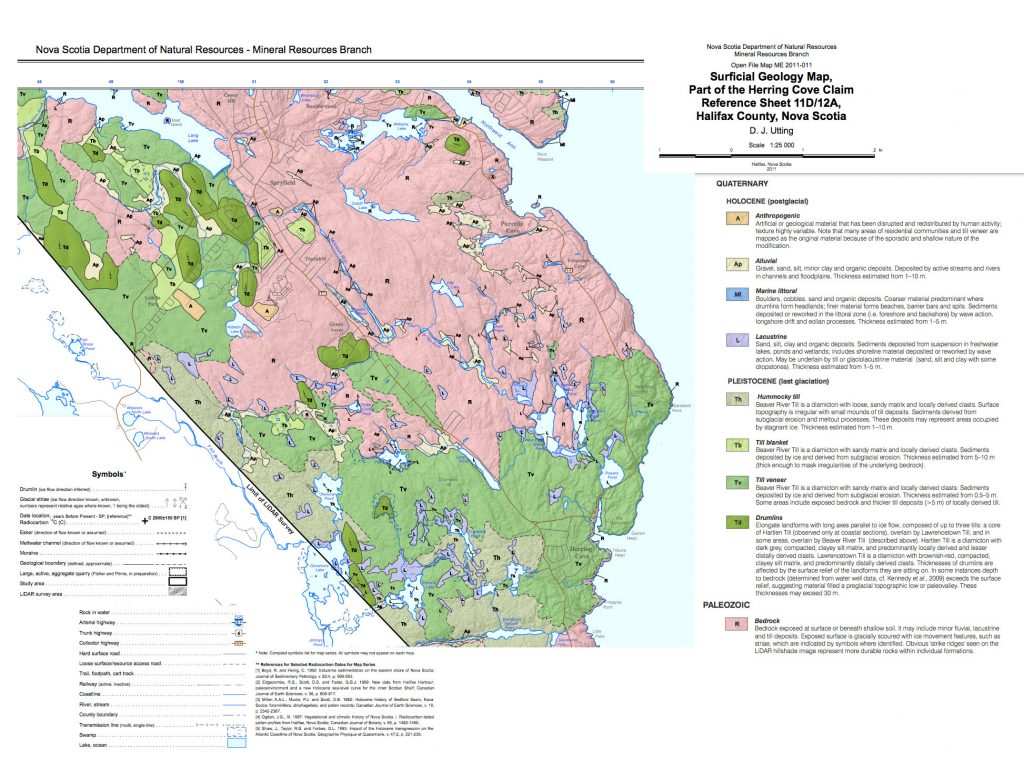 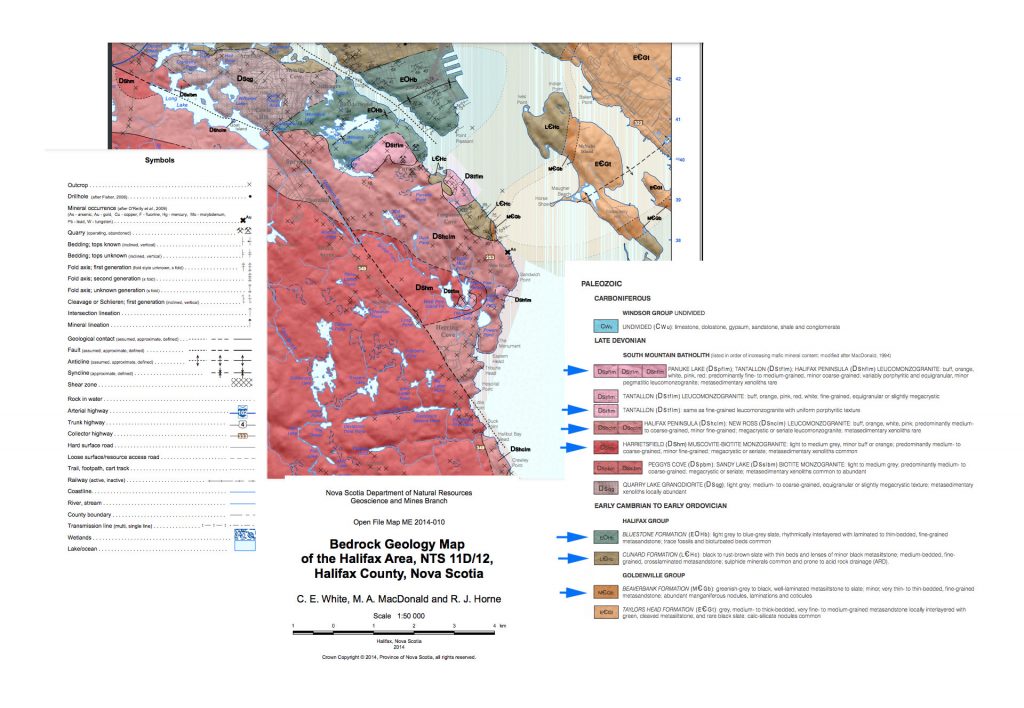