Birders Joshua Barss Donham and Fulton Lavender collaborated to prepare some comments on the Birds in the Backlands: Indicators of the Health of the Habitat. Joshua focused on forest birds , and Fulton on ‘the Specialists’ (on this page)

There are three specialists in the the bird world that make the Backlands unique in a very special way.

These three birds are the “goatsuckers”, insectivores that prey on, in most cases, very specialized insects, some of them are of the larger species. 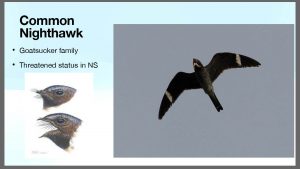 The first is the Common Nighthawk. It nests annually on the barrens, primarily in between the blueberry scrub on top of the rocks. They feed on flying insects, particularly large swarms when they break out throughout the summer, things like , flying ants, and dragonflies that are up higher.

Common Nighthawks nest annually and I expect them to be on territory sometime between the end of May and probably the end of June. 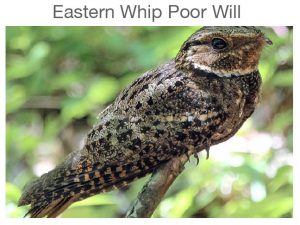 The second species is the Eastern Whip-poor-will.
It’s a bird  that’s on the decline in southern Canada and in the eastern United States. They still have fair numbers in the U.S. but the the numbers in Nova Scotia were always moderate to not-very-high and they seem to have almost disappeared from NS; there has not been one recorded for about 10 years now.

However there is some hope that a pair may take up nesting.

They used to be annually  on territory nesting or at least as a summer resident back in the 1950s straight through into the early 1990s, particularly by Williams Lake -they were often reported there.

The Eastern Whip-poor-will feeds primarily on silk moths; Luna, Polyphemus, and Cecropia are the 3 mains types. The hatches  in recent years in the Backlands haven’t been as prolific as they used to be. 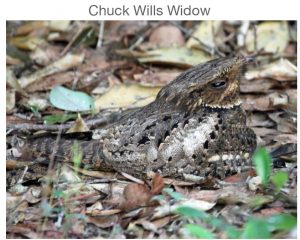 The third bird is Chuck Will’s Widow.  I recorded it nesting in the Backlands in 2009 when a pair of adults raised one young bird. It’s  the only spot in Canada  that we know of where it has nested and still potentially nests other than the southern tip of Ontario.

My observation was made while doing a part of an Atlas Square which is part of the City Square  for the Maritimes Breeding Bird Atlas.  I was doing the Backlands area between Colpitt Lake and Williams Lake… we walked the barrens in behind Colpitt Lake, next to Williams Lake, right at the end of June, a big evening before we went into Canada Day. I discovered a pair of adults responding to the call of a younger bird and going towards it calling him, probably bringing it food. About two weeks earlier I  also had evidence of two adults and a young bird as well. So it went into the Maritime Breeding Bird Atlas for 2006 to 2010 as  a probable nesting bird.

The presence of these three goatsuckers in the Backlands makes it  a very very unique birding site;  we really need to make sure that that we highlight that because the habitat will keep attracting a great variety of birds particularly the nesting species of the Northeastern United States which are going to move in as the climate continues to warm up.

The next group of specialist  Backland Birds are the raptors. I picked four that represent each one  of the four Zone Types.

The Merlin is our second smallest Falcon and it nests in mixed forests, particularly of course those that still had some Conifer cover.

It’s a bird hawk; it  flies down its prey or catches it by surprise. A Merlin can reach speeds of 90 kilometers an hour, so it can easily fly down any prey item that it can flush out into open territory and the barrens make that quite easy.

The second species is the Northern Harrier. it is also found in the United Kingdom, where it’s called The Hen Harrier. The photo at left is   of a juvenile bird in its first year showing its lovely Orange breast; the bird on the right is a female, very cryptic; it can hide very easily in amongst the bogs, particularly the Kalmia bogs at the end of the East Pine Island Lake where they like to nest. 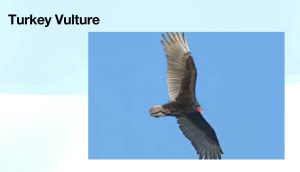 The next species, the Turkey Vulture,  is the only carrion eater that we have in the area. There was a nest in the Backlands  a few years back and it left the area because the site was being built on. But it has been returning year after year looking the site over and also on the hunt for carrion.  So I’m expecting turkey vultures to take up residence in the Backlands sometimes soon. 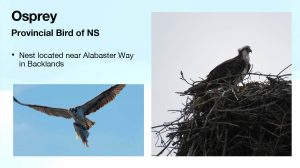 The final species is the Osprey, our provincial bird and one that we’re very very delighted to have in the Backlands. There are at least two nests, possibly a third, in the backlands and of course the most watched nest is the one near Alabaster Way by the barrens.  That is one of my hawk watching sites as I go up on the rocks just from there.

The Ospreys of course are a sign  of how healthy the water is because of the amount of fish that might be in the ponds and lakes there. So  as long as the Ospreys are around, we can have some confidence  that the ecology is still fairly healthy.