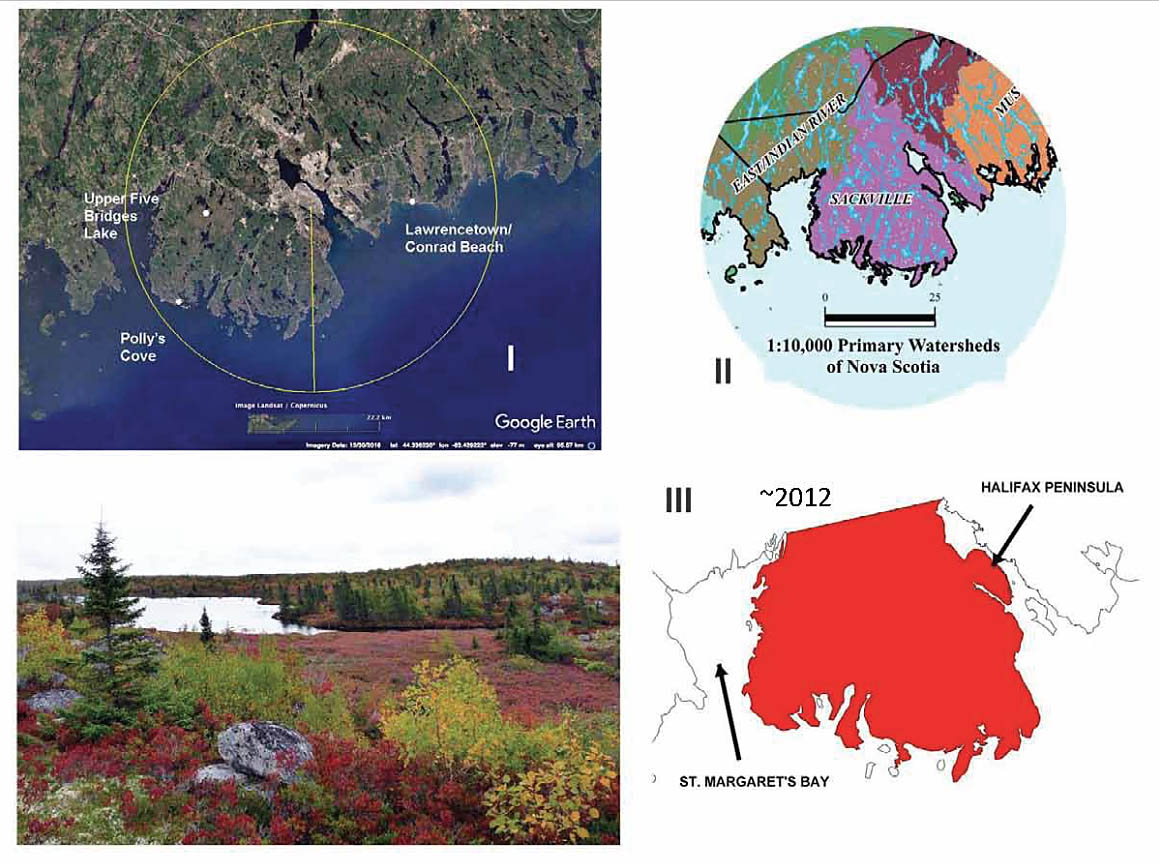 Regional Setting: the Backlands are located on the “Chebucto Peninsula”, the land lying below a line drawn between the upper point of St. Margaret’s Bay and the upper point of the Bedford Basin. It lies within the Sackville Primary Watershed. 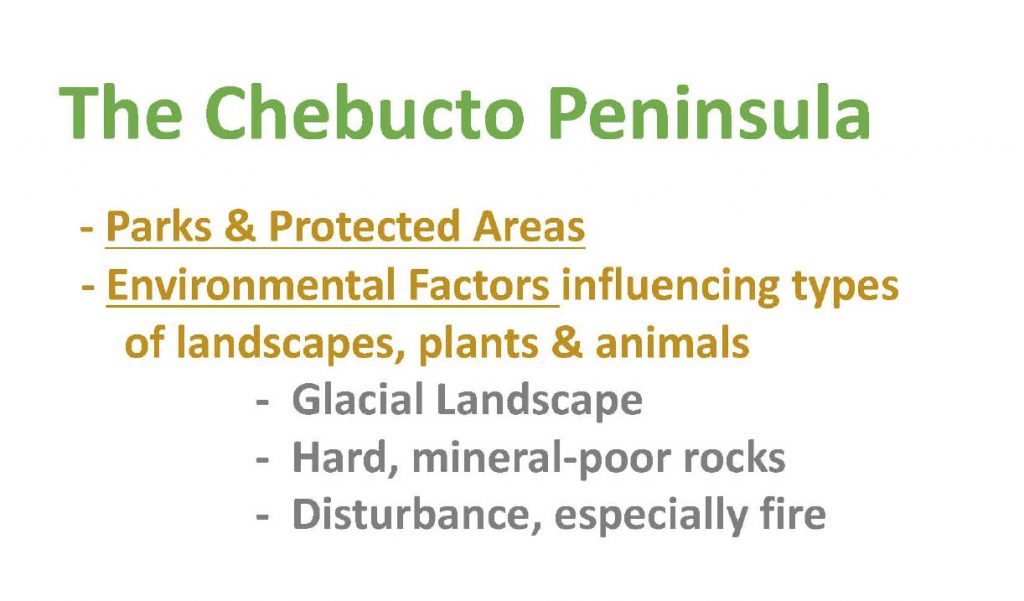 The Chebucto Peninsula has a high proportion of Parks and Protected areas and Crown Land so it’s already a significant Conservation Area. The main environmental factors influencing the types of landscapes, plants and animals on the Chebucto Peninsula are  (i) it’s a glacial landscape,  (ii)  the rocks are hard and they’re mineral poor   and  (iii) ecological disturbances, especially fire. 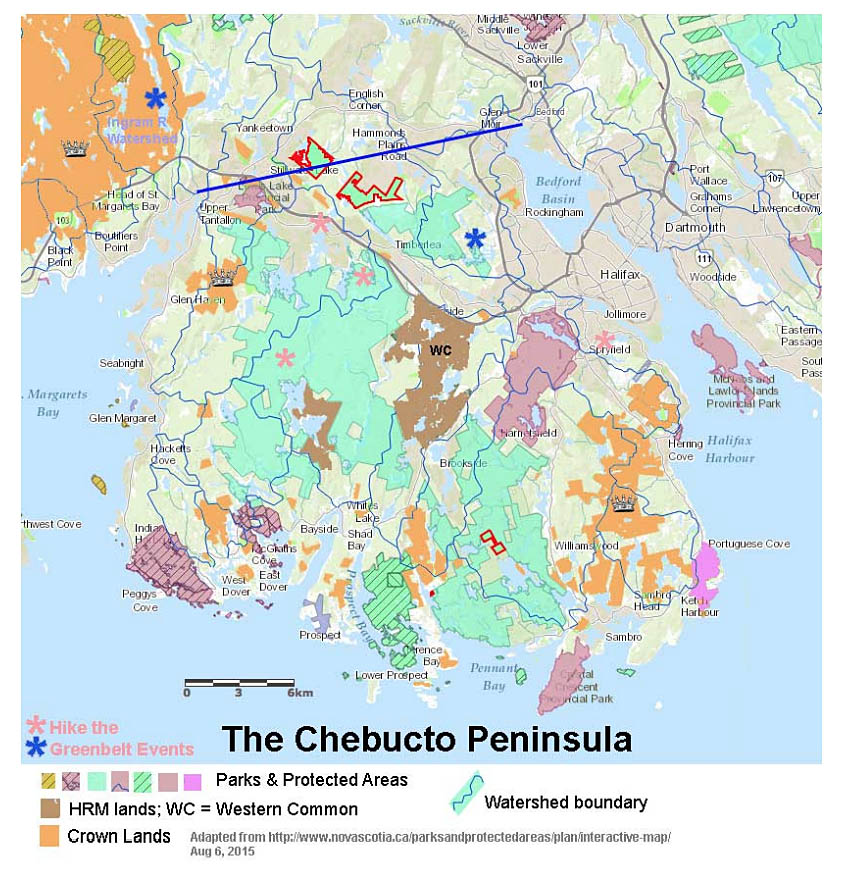 This map shows the large amount of Protected Areas and Crown lands on the Chebucto Peninsula as a whole. 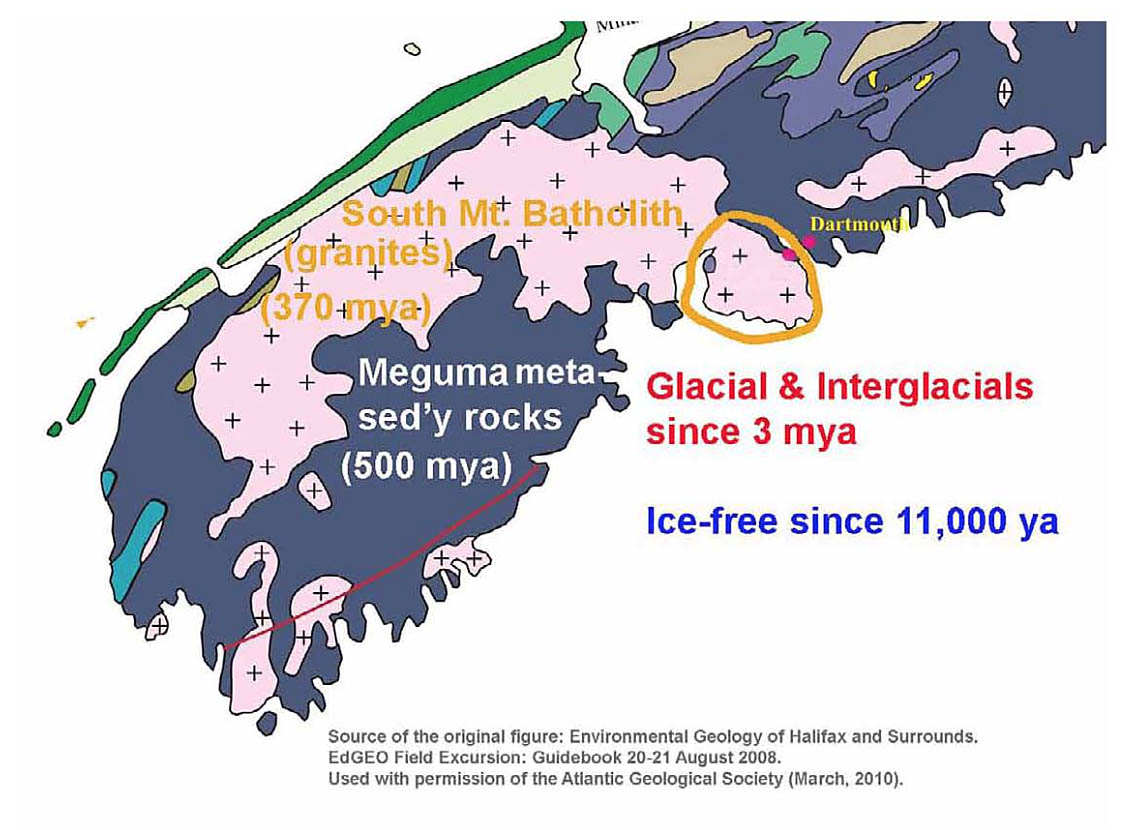 Geologically, most of the Chebucto peninsula is part of the South Mountain Batholith. This mass of granitic rock formed 370 million years ago through processes similar to those involved in volcanic eruptions. Molten magma that formed 20-40 km in the earth’s crust “boiled up” into the overlying rocks of the Meguma Terrane, but did not reach the surface (as in a volcano); rather it cooled slowly, forming granite. Glacial action over the last 3 million years (and perhaps during earlier glacial episodes also) cut away the softer overlying, mostly sedimentary rock, exposing the harder rock of the South Mountain Batholith. In the Backlands we also have a contact zone between the Batholith and these older Meguma  rocks. 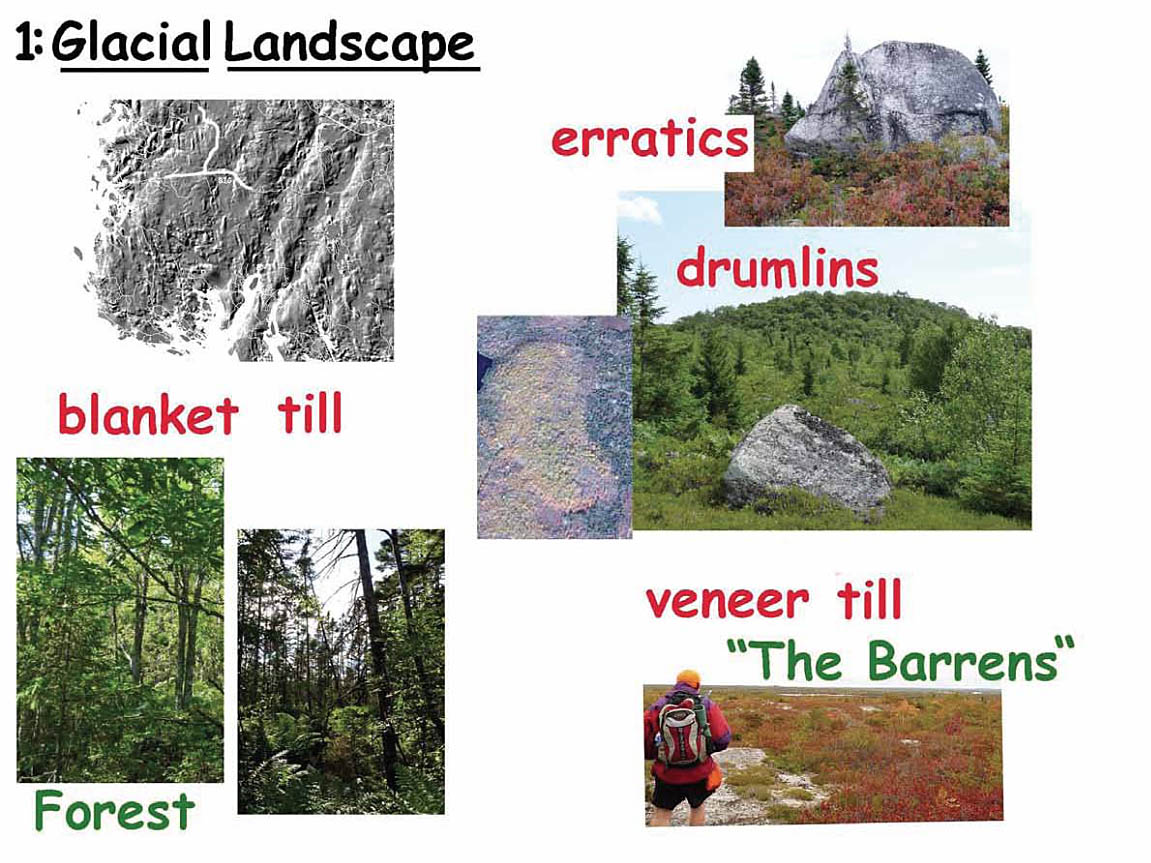 The first big environmental factor influencing the types of landscapes, plants and animals on the Chebucto Peninsula is the glacial landscape. Some of the prominent features of this glacial landscape on the Chebucto Peninsula are (i) ridges and lakes carved out of the granite; they are often somewhat or highly elongated in the direction of ice flow during a glacial interval (ii) drumlins; (iii) large boulders deposited by retreating glaciers; some may be called erratics or perched boulders; (iv) areas of veneer till which are the so-called barrens, occupied mostly by low bushy vegetation or rock faces with only mosses and lichens; (v) areas of blanket till, which support forests, Missing from the above (which apples to the Chebucto Peninsula at Large) but prominent in the Backlands: whalebacks, so prominent in the Governor’s Brook area; and Jack Pine-Broom Crowberry Barrens 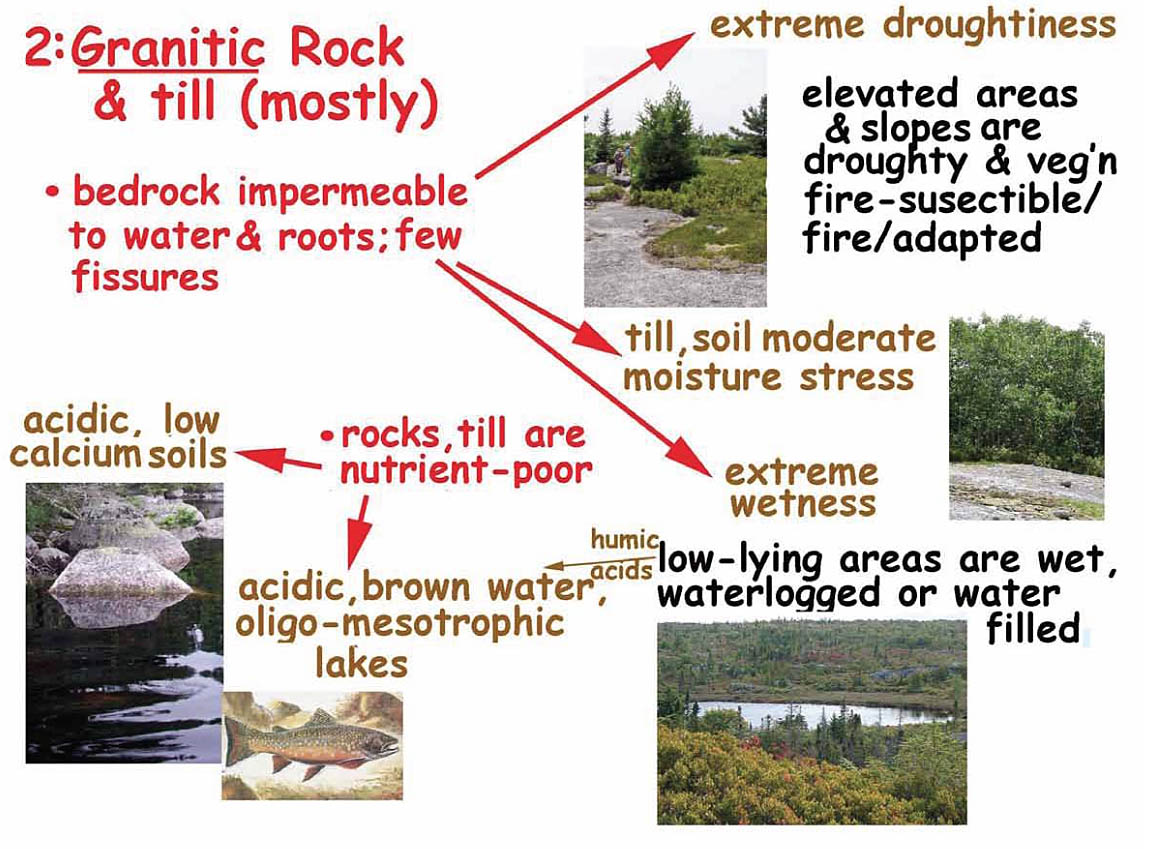 The second environmental factor is the nature of the rock. Granites predominate throughout the Chebucto Peninsula. This has two major effects on the plant communities: (i) Granitic rock is very hard and impermeable to water and roots, and there are few fissures. This results in extreme droughtiness in elevated areas and on slopes, and in extreme wetness in depressions and low-lying areas. (ii) Granitic rock is mineral poor and breaks down very slowly, resulting in acidic, low calcium soils and water. In the upper lying, well drained areas, slow-growing vegetation tolerant of extreme drying and recurrent fires develops – the so called barrens vegetation. It includes low bushy species species such as bluekberry, huckleberry, and broom crowberry. In the low-lying areas, vegetation tolerant of extreme wetness and waterlogging and nutrient poor-condiitons develops including bog species such as sphagnum moss and Labrador tea. Humic acids from wetlands and low lying forests leach into water bodies, forming “brown water”. Forest develops only where there is some accumulation of till. In low-lying areas, forests or quasi-forest stands are dominated by red maple, tamarack, or black spruce (othen with fir) according to local conditions. In higher lying areas there may be mixed deciduous-conifer forests or pure hardwoods. Species requiring higher calcium levels, e.g., sugar maple, are not found in these areas. 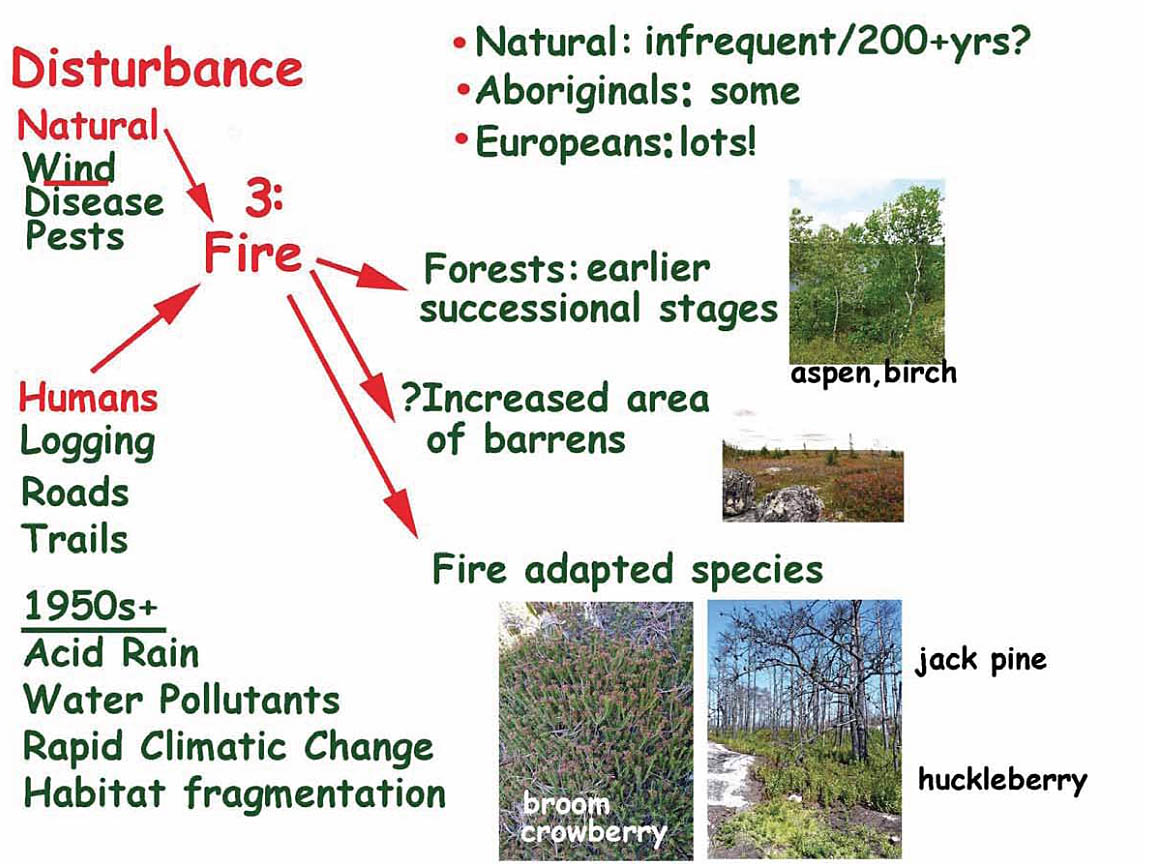 Ecological disturbances are the third big environmental factor; in the Backlands the major ones are fire, wind and pests and diseases. Disturbances that are severe enough to cause most of forests stands be destroyed are called “stand-replacing disturbances”. Stand-replacing disturbances essentially “reset the clock”, initiating new successional sequences. Recurrent, stand-replacing fires started by lightening, occur naturally in some landscapes. In Canada’s boreal forest, for example, such fires occur at intervals of about 250 years on average. For the Acadian forest, which covers much of NS, natural fire intervals are much longer, perhaps 1000 years or more. Fires occur at shorter intervals on more drought prone landscapes such as Backlands, e.g., perhaps at 100-200 year intervals on average naturally, but at shorter intervals since the settlers arrived until the mid-1900s when the fire control became so effective that fires occur less frequently than they would naturally.