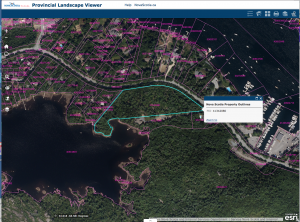 We are writing as Directors of the Williams Lake Conservation Company (WLCC) in regard to PID 41342080. You are tasked with consideration of a “Quick Fix” in the current Regional Plan Review of a change from the current Urban Reserve (UR) zoning to Rural Commuter zoning. As is known, UR would accommodate one building on this property and a rezoning would allow for more. You requested the information we provide below as we know the land well and understand the community’s stake in any changes. Ideally, we would prefer to see no change to this property. Consequently, the only circumstances under which we would entertain a change of zoning would completely embrace the vision that we set forth below.

Story of the Land
This parcel of land is unique. It lies on the shores of Williams Lake and possesses attributes which have appealed to many over the centuries. There is little doubt that Indigenous People occupied the land as it rests between the ocean and the lake where constant traversing of the land would have taken place. In later years the well known Nova Scotian, Joseph Howe would paddle across the Northwest Arm, walk through the woods and swim to ‘Howe Rock’ which is now found in the Shaw Wilderness Park.

The beautiful forest found on the property is old growth and consists of Hemlock which can barely be found in the area following the clear cut of the nearby Boscobel lands a few years ago. This forest is home to many animals and countless birds including a family of Barred owls.

The forest floor is marked with many outgrowths of moss as there are ponds, vernal pools, fens and small streams in abundance. This precious assortment of water features are particularly noteworthy given the proximity to the shore of Williams Lake. It has recently been established that the lake has reached a tipping point and that any further development close to the lake is completely contraindicated.

The use of the land to access the lake is not to be viewed only in an historical context. Today people drive, bus, bike or walk to a path situated below the mailboxes on the property. The path is known as Lover’s Lane and takes the users of the lake to ‘ Turtle Bay’, ‘Initial Rock’ and ‘ The Wedge’ to enjoy sunbathing, swimming, fishing, skating and other recreational endeavours. The path down to the water and the lands is necessary for the common good.

The existence of the Shaw Wilderness Park is a testament to the value of the land and the necessity of its preservation. The foresight shared by WLCC, The Shaw Group, HRM, the Nature Conservancy of Canada and the broader community should be used in extending the same treatment to this unique property.

Gentle Touch
Any disturbance of this land must be undertaken with the utmost care. The land contains several essential characteristics which are outlined below. It cannot be forgotten that this land lies on the shore of Williams Lake and that presents yet another environmental challenge.

Williams Lake has seen deterioration in water quality and 2021 saw several toxic cyanobacteria blooms. These changes are due to a combination of climate change impacts (increased summer temperature, changes in precipitation patterns and lake recovery from acidification) combined with stormwater runoff and urbanization along the shores of the lake. If we want the residents of HRM to be able to recreate on this lake in the future, especially now that much of it is a park, we need to take action to prevent further development along its shores.

The logical location for any buildings would be situated in the far south corner of the property. It is here that: the slope from the Purcells Cove Road levels off; water features are less present; there is greater distance from the lake; and the forest destruction from Hurricane Juan is located.

Hemlocks and White Pines
The first map below is the Google Earth image for the Hemlocks and White Pines on the property. The Hemlocks are indicated by red dots and the White Pine with blue dots. You will note that some of the Hemlocks are within a grove while others stand alone. Dr. David Patriquin has commented that this may be the last Hemlock stand in Mainland South and thus needs our attention and protection. Map 3a of the Mainland South Secondary Planning Strategy clearly shows this area as having significant environmental sensitivity because of its tree cover on slopes going down to the lake. HRM is investing in a significant lake monitoring program that starts this year. Williams Lake is one that will be monitored. It is prudent that we do not allow development to further degrade water quality in the lake. With the substantial slope of this land toward the lake, any land clearing and change in land use will affect stormwater runoff patterns and water quality entering the lake, including potential for sediment runoff and increased nutrient inputs to the lake, which could further fuel harmful algal blooms. Our community continues to grieve over the wonton destruction of the old growth Hemlock forest at Boscobel several years ago. 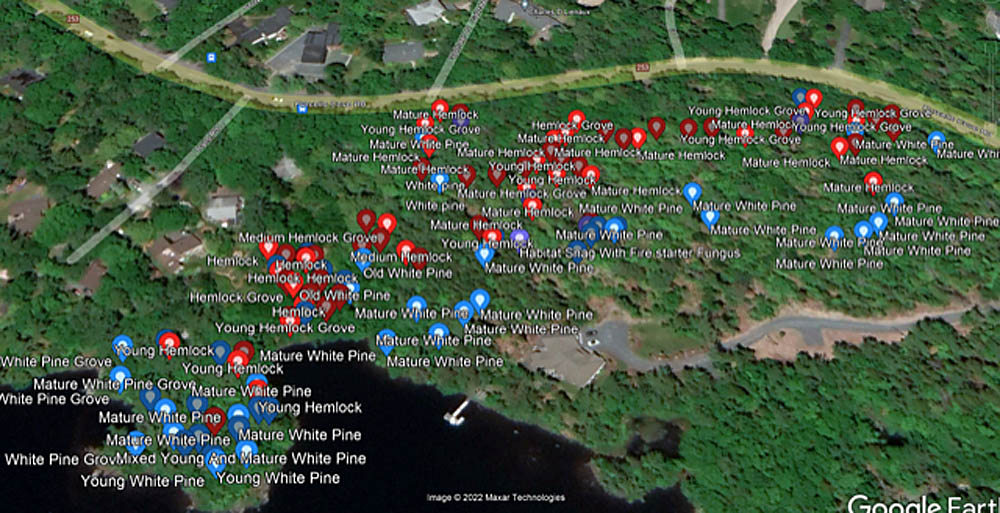 Public Access and Ownership
In 2014, Dr. Patriquin and Dr. Nick Hill released an ecological assessment of the area. This report can be found on the Backlands Coalition website http://backlandscoalition.ca/WLCCreport/WLBFinalRep12Feb2014.pdf The Google Earth map below is from this report and is “Fig. 2.2 Waypoints from all surveys on Google Satellite Map” which clearly shows in orange dots the public access path that runs from the Purcells Cove Road to Williams Lake. You will recall that we spoke at length about “Lover’s Lane” which is a very old and well used path. Anyone familiar with the area knows that as soon as the weather hits a consistent 20 C many people use this path for getting to the lake for swimming.

An important part of the mandate of the Williams Lake Conservation Company (WLCC) is to maximize public access to the lake for recreation such as swimming, skating and fishing. The people who use this path are non-residents and come from all over the municipality. Fortunately, Sections 82 and 83 of the Halifax Regional Subdivision Bylaw allow for a “park dedication” to the municipality. Of particular note is the recognition of land abutting a natural watercourse and the provision of a point of access to the public which is useable for water-based recreational purposes.

The opportunity to preserve this very important public access to the lake could take on a similar form as the public access found at 51 Wyndrock Drive. This public access was created by a park dedication at the time the Pine Bluff subdivision was developed. See satellite view of this public access.

It is imperative that the public access extend to the peninsula (shown on the Google map below). This is the area where people swim, get into or onto the lake. This land also has significant water features including Charlie’s Brook and the Narrow Pond which dissects the peninsula from the mainland. It is evident that the peninsula would never be susceptible to development given the 20 metre setback (riparian buffer) necessary from the high water mark shown below as a brown border on the shore. The logical solution to maintaining the public access with regard to the path, the peninsula, the water features and the Hemlock Grove is to deed those lands to HRM or another interested party.

We were grateful for the opportunity to meet with you last month and look forward to continuing our discussion. 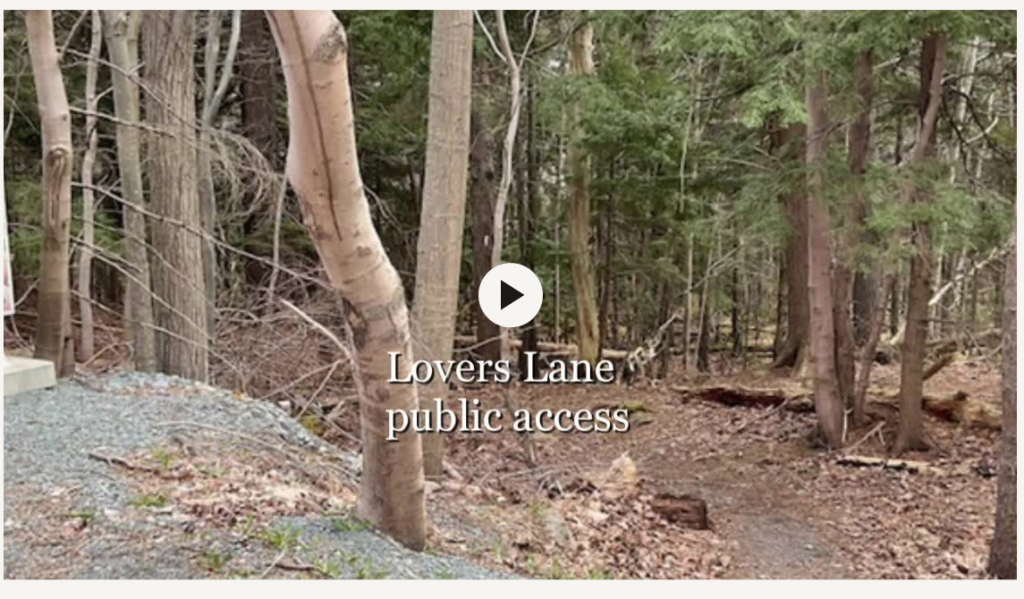 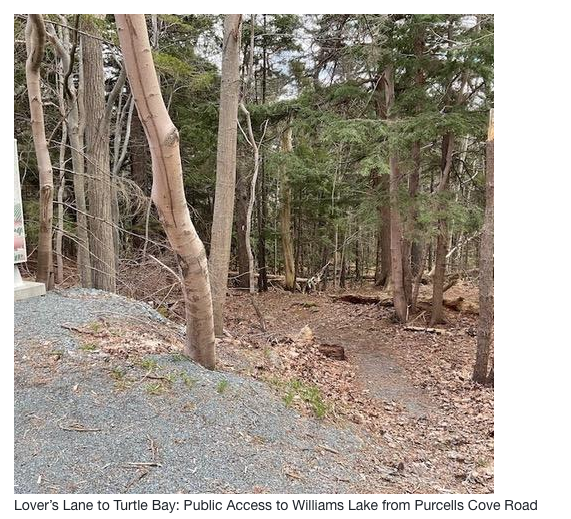 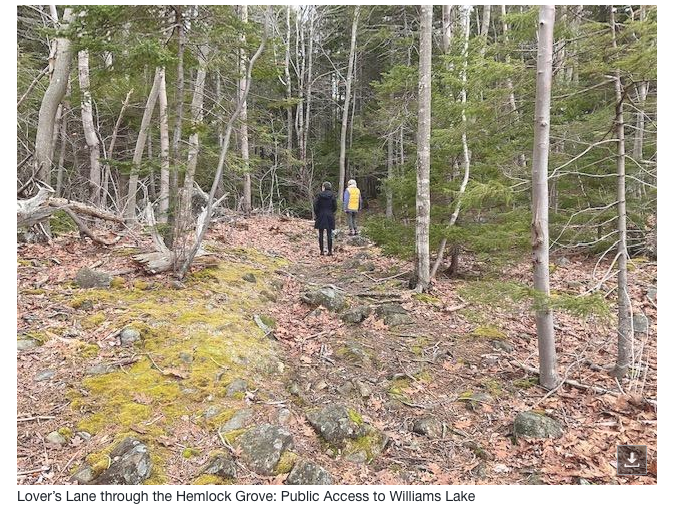 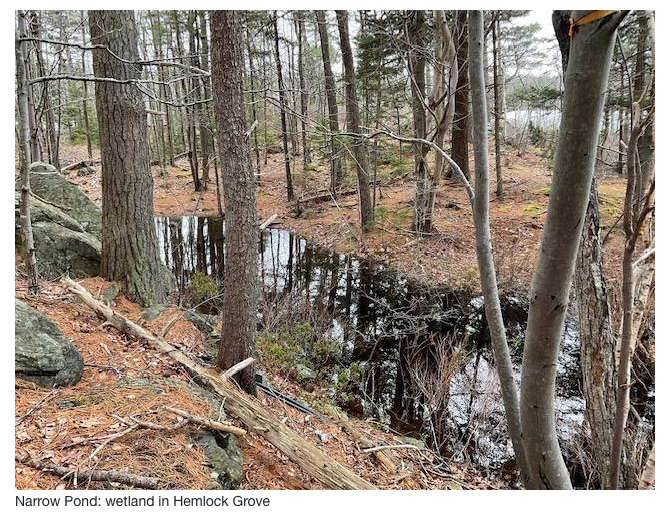 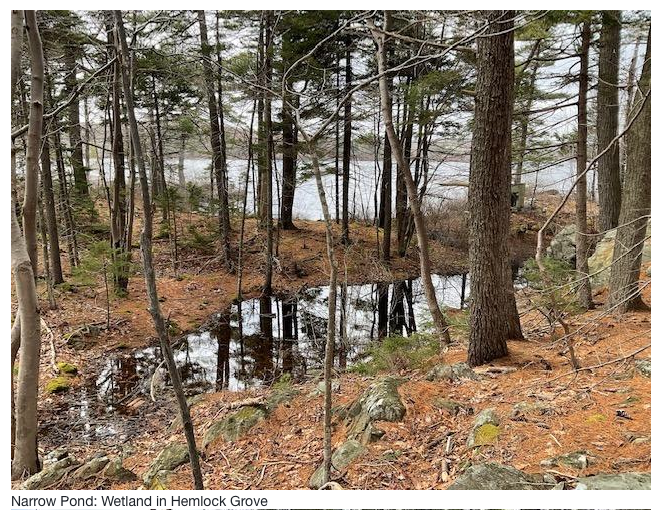 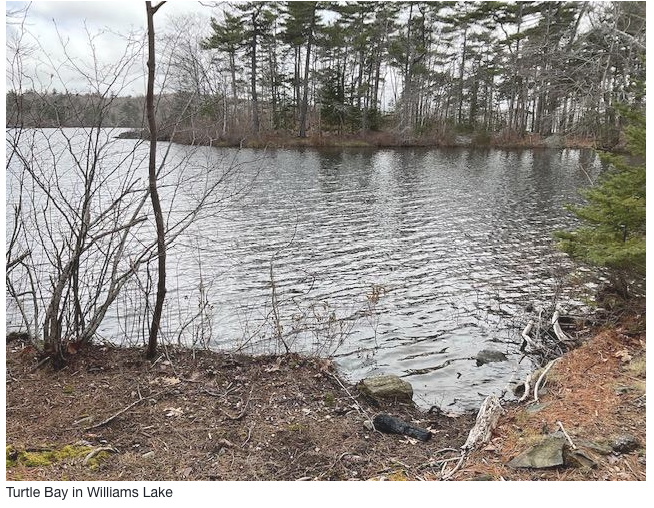 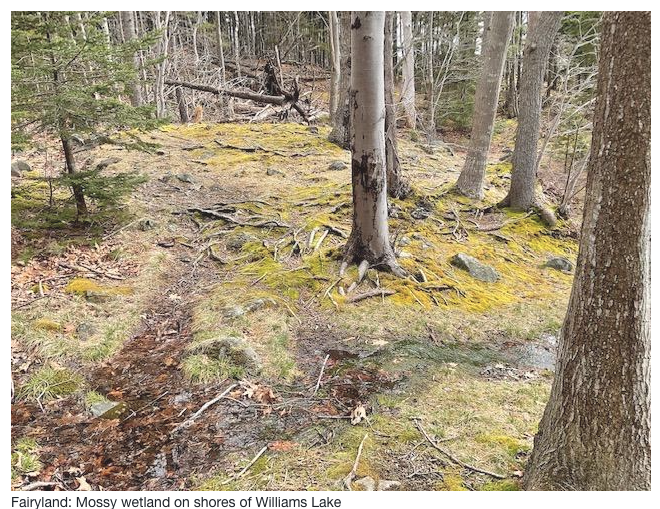 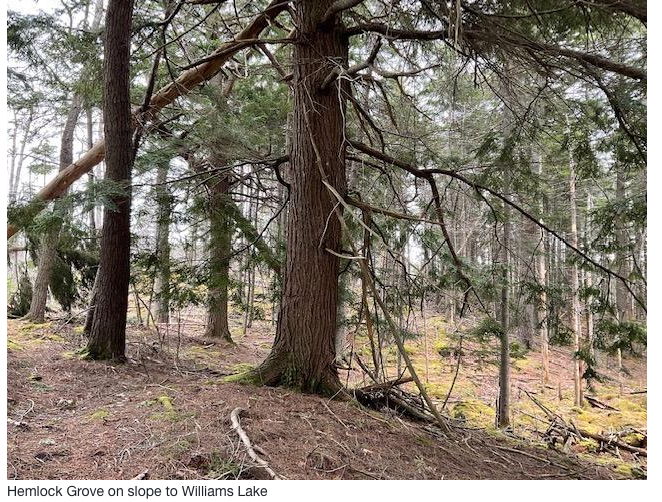 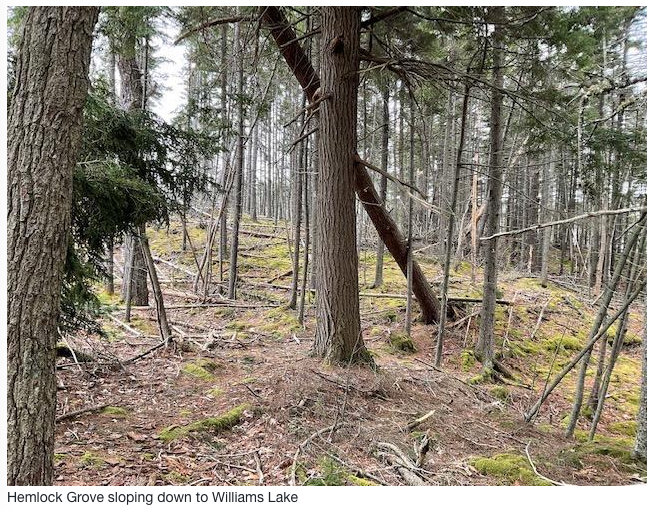 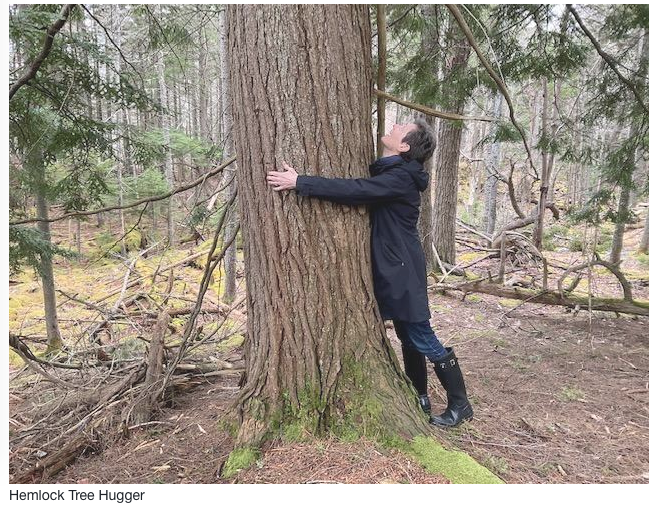 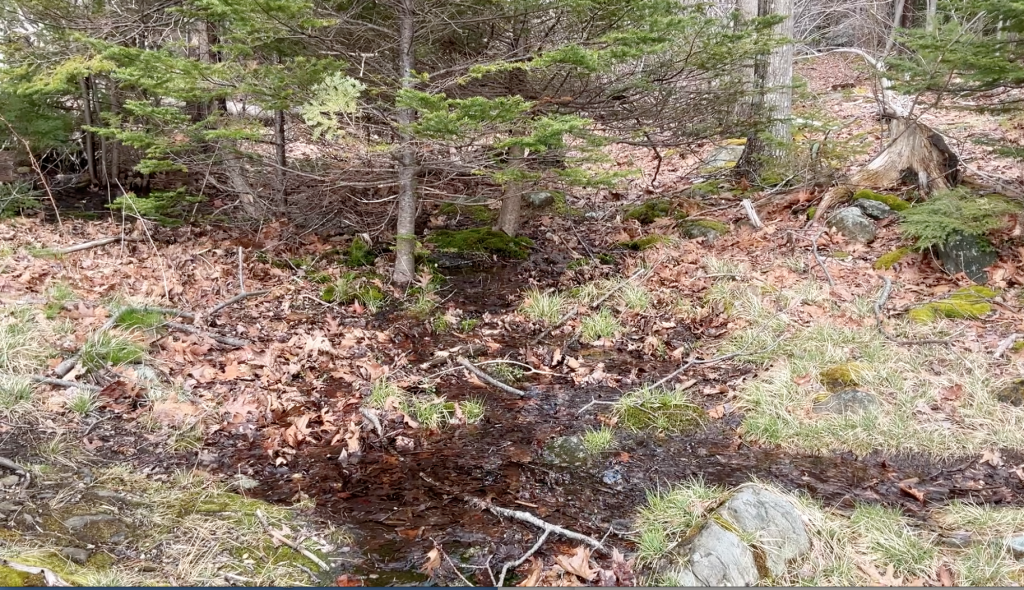