The Summary below, and the 10 slides following it are from: N. Hill and D. Patriquin. 2014. A Rare, Fire-Dependent Pine Barrens at the Wildland-Urban Interface of Halifax, Nova Scotia. Presentation to the Wildland Fire Canada 2014 Conference, Halifax, N.S. Oct 6-9, 2014 View PDF.

The annotated slides provide a concise illustrated description of the Jack Pine-Crowberry Barrens, their relationship to fire, and the outline of a conservation-fire management strategy to maintain this rare ecosystem while protecting nearby residential structures from fire.

Summary
Given the appropriate geology and climate, fire barrens of high ecological integrity require space and fire, making them increasingly threatened systems. The Purcell’s Cove Backlands (PCB), approximately 1350 ha on the Halifax south mainland, are an area of rough terrain with shallow soils and outcroppings of hard rock that have remained without roads or significant settlement except at their periphery until recently. There are many trails and several lakes are popular for swimming. There are frequent fires.

The 2009 “Spryfield Fire” covered 800 ha and destroyed eight houses on a street recently developed in an area of Jack Pines. In 2013, we surveyed plant communities and wetlands of the Williams Lake Backlands which cover approximately 200 ha within the PCB.*

The fire dependent/fire adapted nature of plant species in seven upland vegetation types and carbon dating of charcoal from a Jack Pine Tussock Sedge fen indicate that fires within PCB are part of a long-term fire regime that predates European settlement.

One result is the presence of a fire-dependent Jack Pine/Broom Crowberry Barrens community that is nationally unique to Nova Scotia and globally rare. The recent frequency of fire in the PCB appears sufficient to maintain this community.

However settlement that impinges on Jack Pine/Broom Crowberry Barrens has involved either their complete destruction or subjected residents to highly elevated fire risk. No further development within the PCB would help to reduce fire threats to habitations, conserve a rare pine barrens and provide several other significant social and ecological benefits. 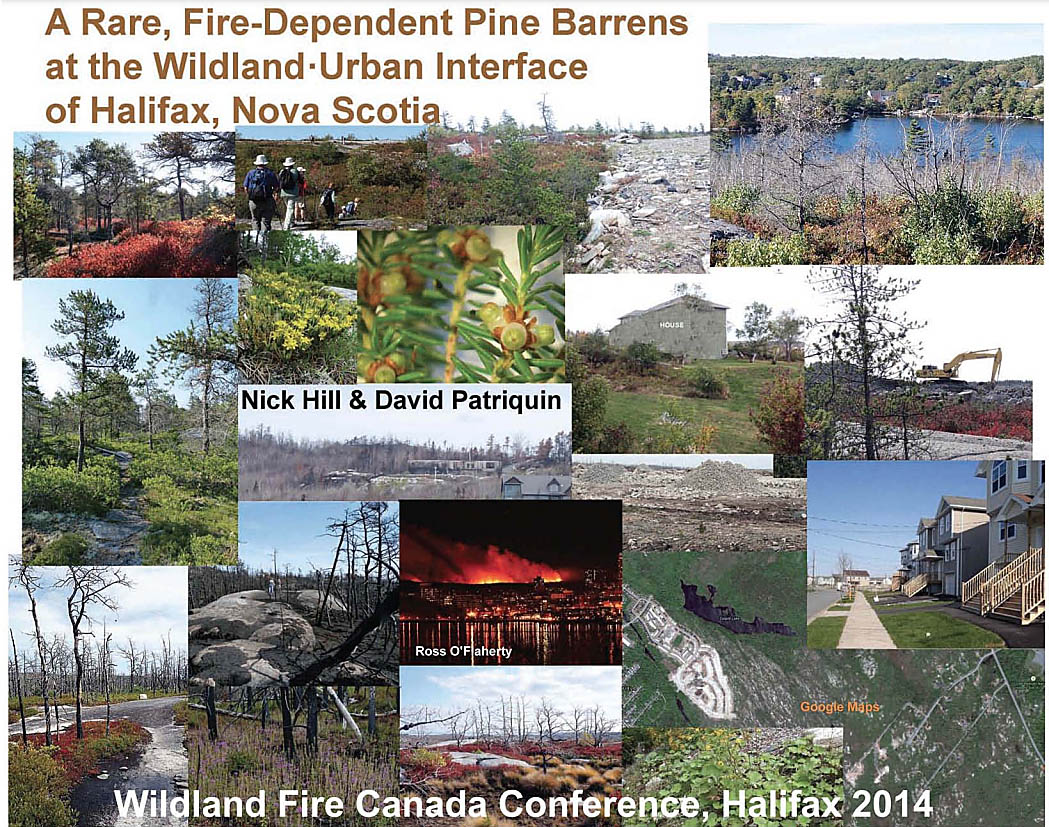 S1. We don’t often think of the Halifax region as one of drylands and fire-dependent ecosystems, but we have our own version of the better known Pine barrens of NY, NJ area, and like the Long Island Central Pine Barrens, they lie right at the Wildland-Urban Interface (WUI).
Click on images for larger versions (with text) 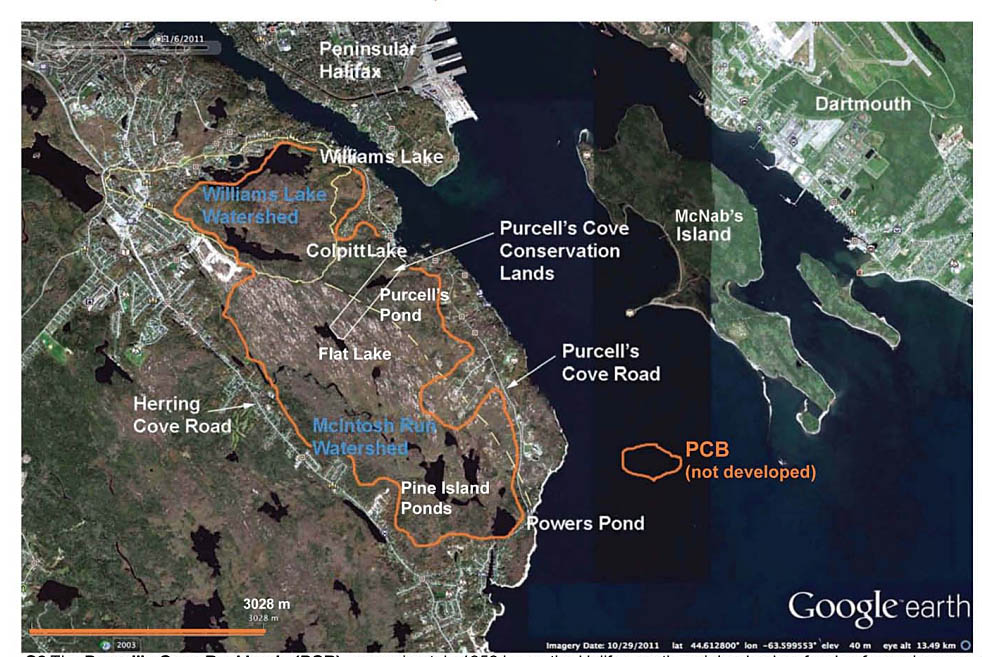 S2.The Purcell’s Cove Backlands (PCB), approximately 1350 ha on the Halifax south mainland only a few km from where we sit, are an area of rough terrain with shallow soils and outcroppings of hard rock that have remained without roads or significant settlement except at their periphery until recently. There are many trails and several lakes are popular for swimming. There are frequent fires in this area 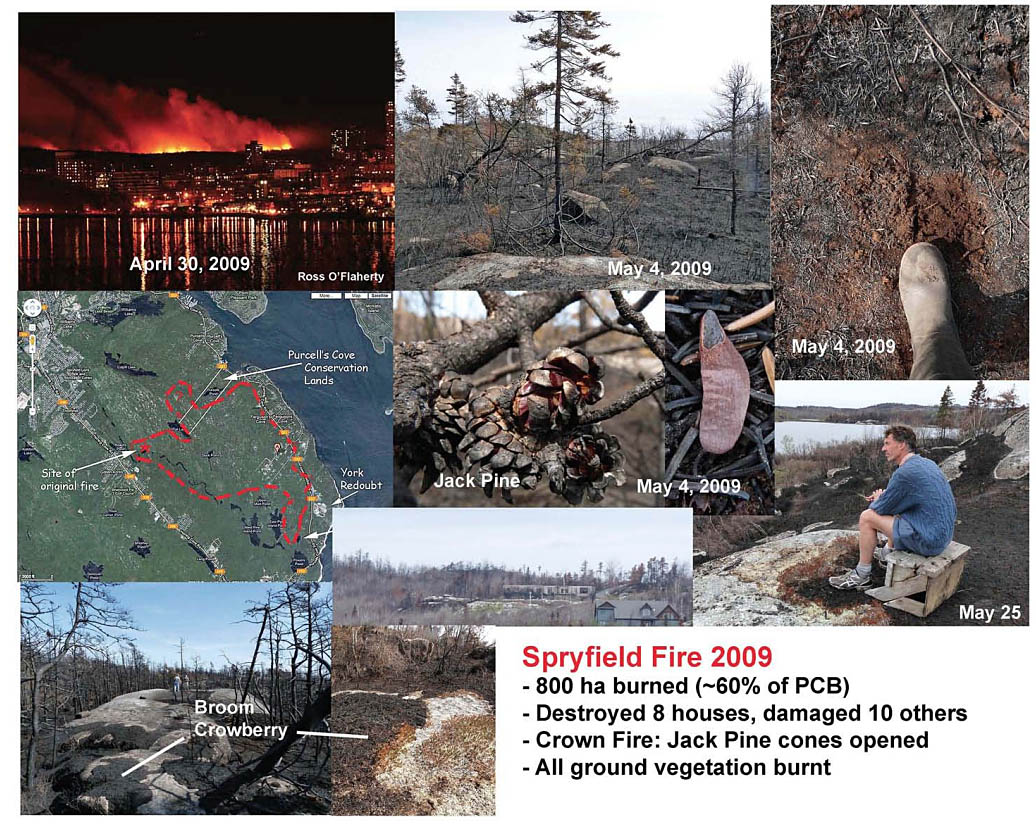 S3. The 2009 “5pryfield Fire” covered 800 ha and destroyed eight houses on a street recently developed in an area of Jack Pines. I have followed recovery of the vegetation subsequently,
documented photographically. It followed well described post-fire succession in similar fire-dependent/fire-adapted forest and bushlands. 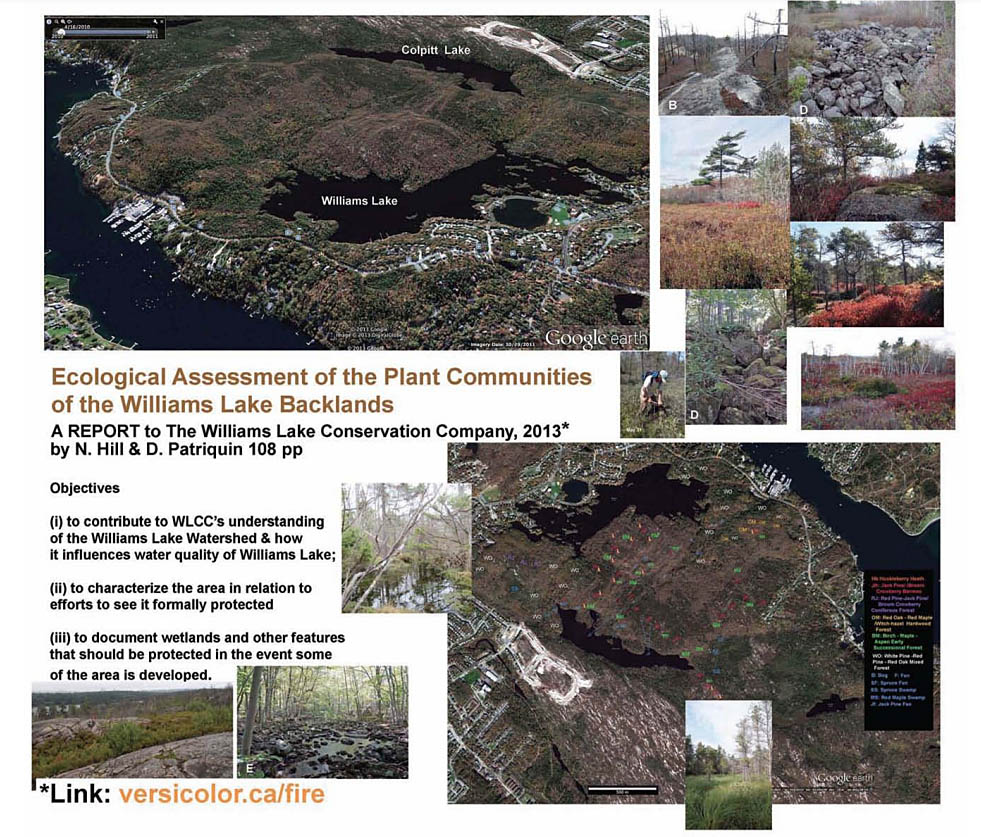 S4. In 2013, Nick Hill, my co-author, and I surveyed plant communities and wetlands of the Williams Lake Backlands which cover approximately 200 ha within the PCB. It is representative of most of the larger area, the exception being the riparian forests surrounding the lower Macintosh at the SE end of the PCB. It is a rough, mosaic landscape as conveyed by Google Earth Oct 29. At that time, most deciduous trees have lost leaves. The reddish hues are associated with black huckleberrty; yellowish with red oak, and most of the dark green with Jack Pines. Bottom right, shows some of the ground truthing for vegetation, and sites of fires since 2007 which cover about 20% of the area 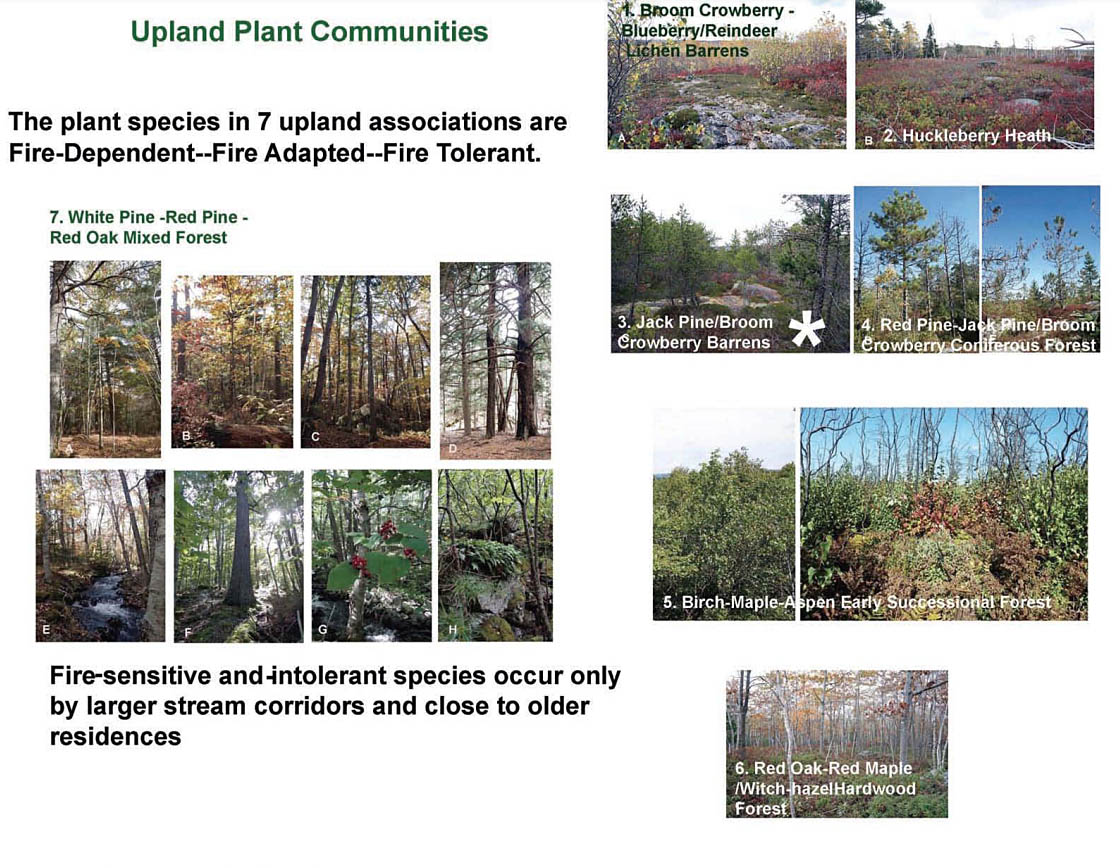 S5. A variety of evidence indicates that the plant communities in this area have been subjected to and are adapted to regular fires. One piece of that evidence comes from the composition of the upland plant communities. Of particular note is the presence on outcrops of Jack Pine/Broom Crowberry Barrens 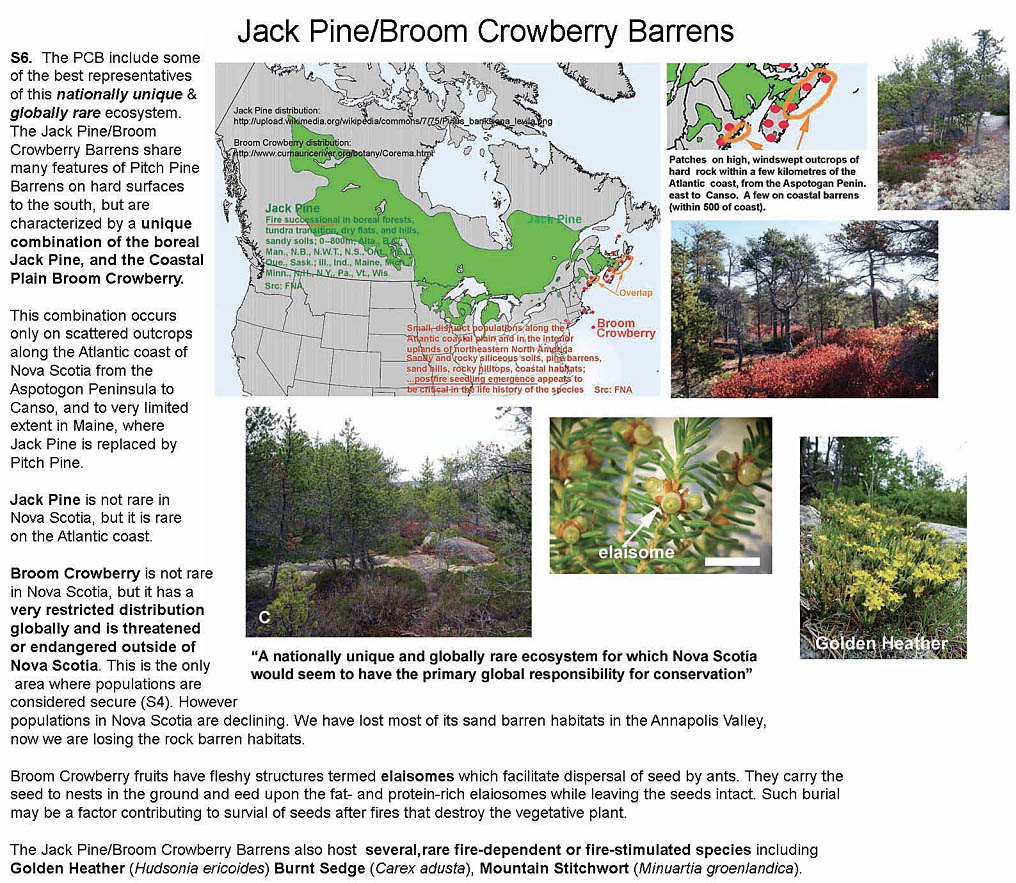 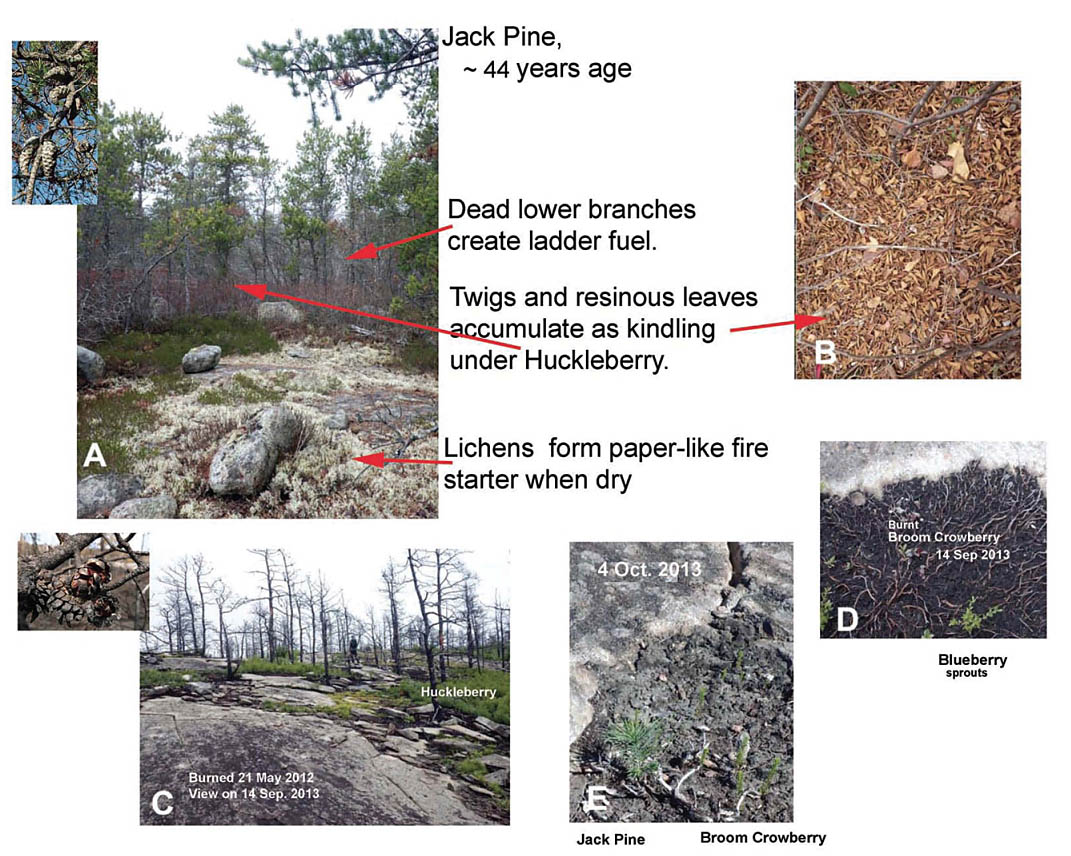 S7. These are fire-stimulating as well as fire-dependent and fire-adapted ecosystems. We saw some of these features on the field trip yesterday.The Jack Pines are mostly serotinous (i.e., with closed cones which require the heat of a fire to open). There is rapid recovery of vegetation after fires. Jack Pine in this locale becomes reproductive at 4-5 years of age and ready to burn in its teens. Huckleberry deposits a highly flammable litter, and lichens in the more open areas are highly flammable. The more open areas drain dry very quickly after rain. We consider them to be “matchsticks” for fires in the PCB, which is also suggested by the modeling of fires in the area by Ellen Whitman and colleagues (Ellen Whitman, personal communication): “…large fires generally occurred much more often around the barrens, with some escaping downslope towards Purcell’s Cove Rd., as has happened in the past two fires in that area.” 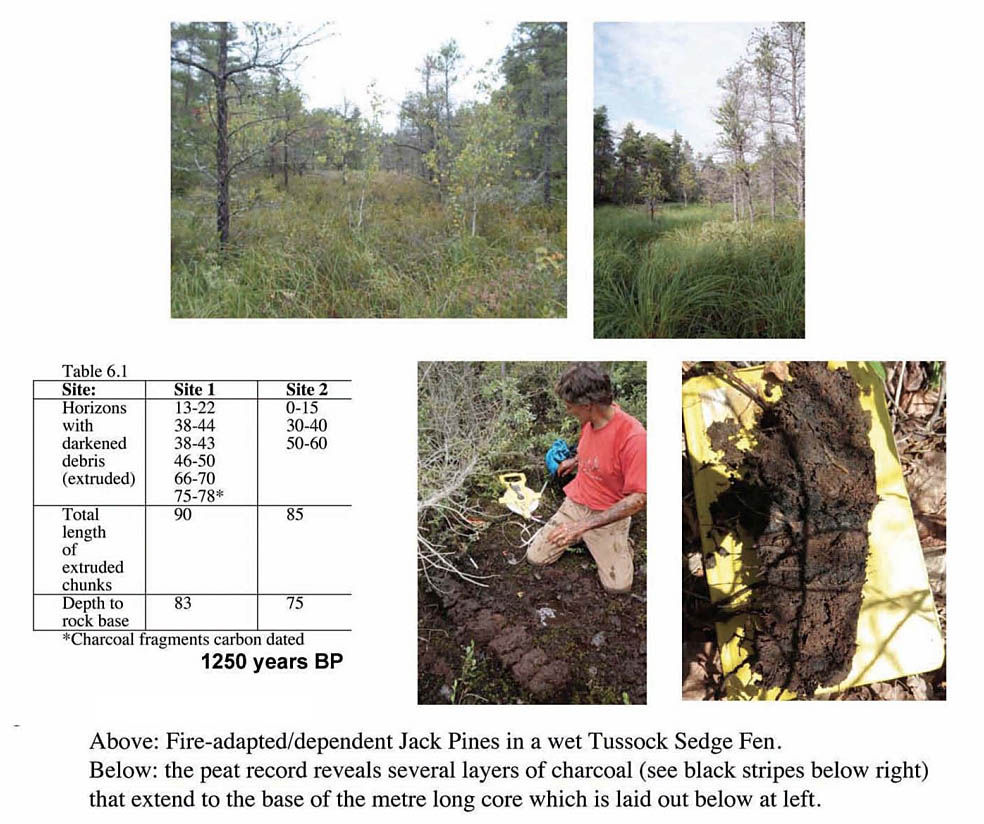 S8. It is commonly assumed locally that fires in the PCB are man-made and are a product of European colonization. We cored a fen to look for a possible pre-colonial record of fire. Distinct layers of charcoal were found. Charcoal removed from the deepest layer in one core was dated at 1250 BP. 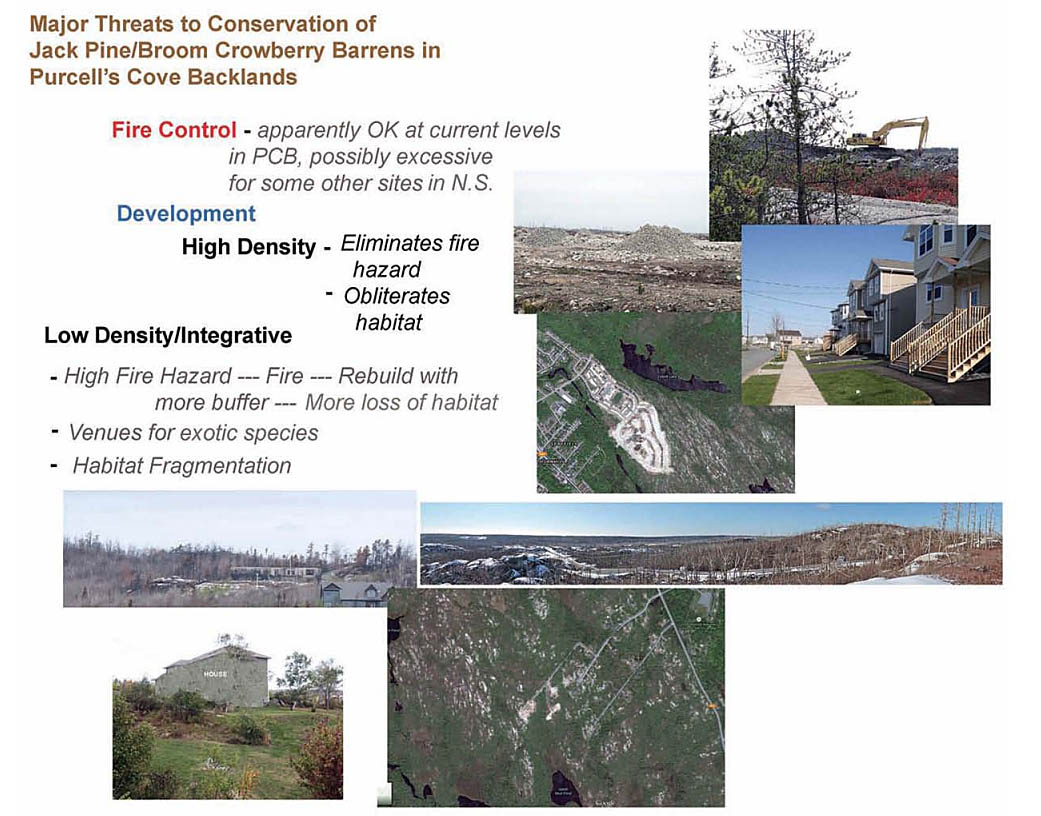 S9. Major threats to conservation of JackPine/Broom Crowberry Barrens in Nova Scotia are likely fire control and development. For the PCB, the recent frequency of fires has apparently been adequate to maintain healthy communities. This may not be the case at other locales in N.S.
where fire suppression is more effective and/or ignition events are fewer. The greatest threat to the PCB is development. Two types of development have occurred; neither appears to be compatible with conservation of the native communities, especially as the total area is so limited. 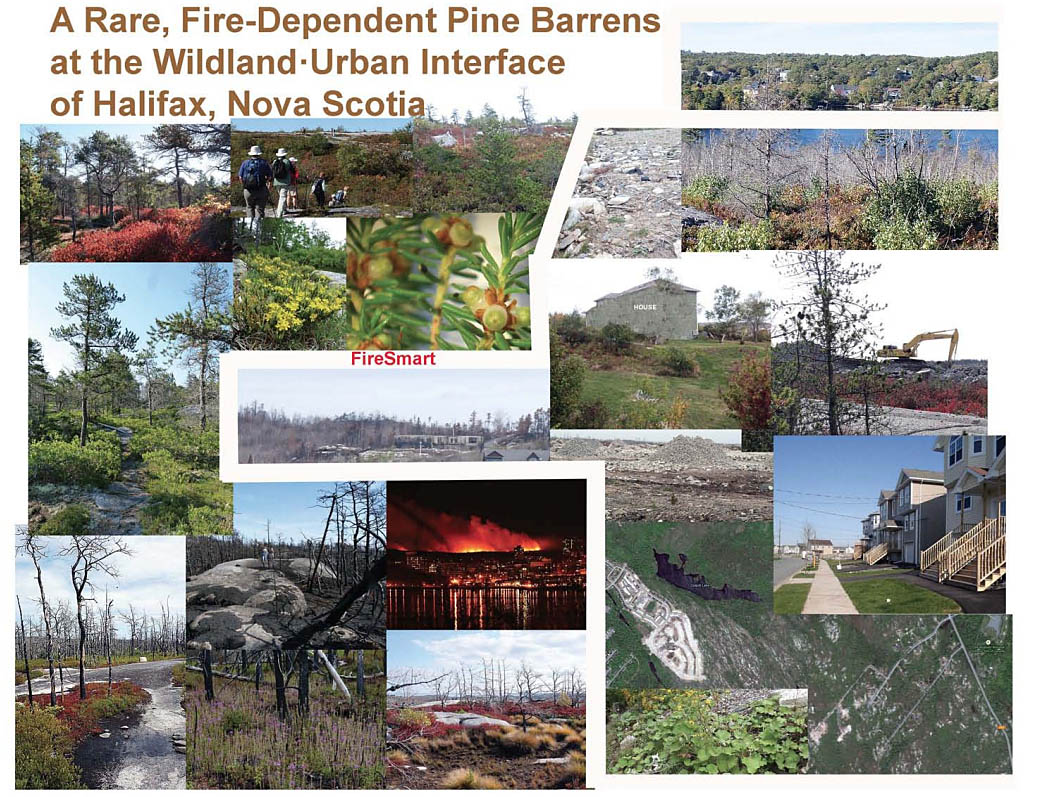 S10. Thus we suggest a strategy of FireSmart protection of current residences on the fringes and extending into thePCB (low density model), and no further development within the PCB are appropriate ways forward. There is widespread support for preserving the PCB for natural, historical, cultural, conservation, educational, recreational and common use.