Mid fall, when the huckleberry leaves turn fire engine just before finally being shed, is perhaps the most colourful time to visit our Pine Barrens – the Jack Pine-Crowberry Barrens – but they are wonderful places to visit any time of the year. 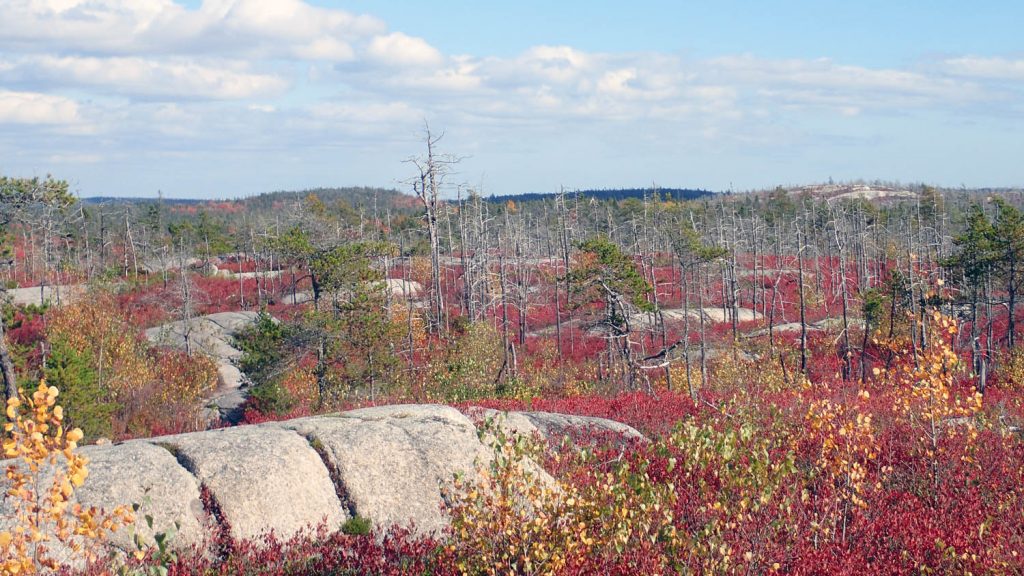 The barrens by the Governor’s Brook residential area on Oct 17, 2016. In the foreground just behind the closest whaleback outcrop are old Jack Pine trees that escaped the 2009 “Spryfield Fire”. The dead trees beyond are those of Jack Pine (mostly) that burned in that fire. The red is huckleberry leaves.  The rock outcrops are described geologically as  ‘whalebacks’; there is a “field of  whalebacks” in this area. The broadleaved-trees in the foreground  growing in a low area in front of the closest whaleback are birches. Photos on this page and elsewhere on this website unless otherwise indicated were taken by David Patriquin and may be be freely copied and used non-commercially, credit appreciated.
Click on images for larger versions.

What are “Pine Barrens”?

“Pine Barrens” are a type of ecosystem or plant community (or sometimes a type of ecoregion) that occur on dry, acidic, infertile soils from Florida to Nova Scotia in eastern NA, also in the Midwest and West of NA and in parts of Eurasia. They are dominated by grasses, herbs, low shrubs, and small to medium-sized pines of several species. Most or all of the species are adapted to recurrent fires and some depend on repeated fires to be maintained. They typically support a number of rare, fire-dependent species. Adapted from Wikipedia

Jack Pine-Crowberry Barrens
“Jack Pine-Crowberry Barrens” are a type of pine barrens almost unique to the Atlantic coast of  Nova Scotia. In the past I have called these pine barrens the “Jack Pine/Broom Crowberry barrens” but that’s a bit of a mouthful and “Jack Pine-Crowberry” Barrens is enough to include what’s unique about our pine barrens: the combination of Jack Pine, a boreal forest pine at the southern limit of its distribution, and Broom Crowberry*, a low-growing, heathy  Coastal Plain species,  close to its northern limit. Both are highly fire-adapted and fire-stimulated species.
*Broom Crowberry has NatureServe S4 conservation status (apparently secure) in Nova Scotia but its conservation status is precarious outside of Nova Scotia and populations are declining in NS.  Outside of NS, it occurs only in the  Magdalene Islands of Quebec and in P.E.I. where it is   imperiled (NatureServe S2 status), in    Maine (S3/ S4 status),  in Massachusetts, New Jersey, and  New York states (S1-critically imperiled- to S3 -vulnerable- status). Broom Crowberry was either never present or is extirpated in New Brunswick. 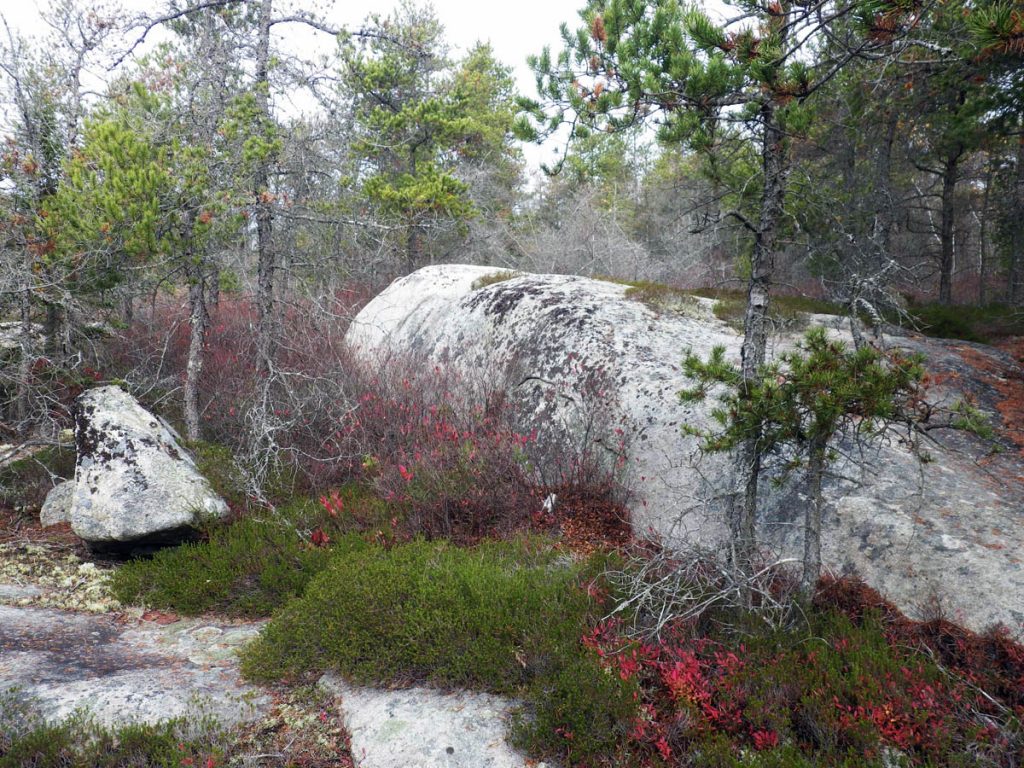 Mature Jack Pine Crowberry Barrens by a whaleback outcrop  on Nov 6, 2013.  Trees are Jack Pine, the red leaves are those of huckleberry, and the heathy green mat is Broom Crowberry. Stand about 50 years old. Site in the Shaw Wilderness Park.

These Jack Pine-Crowberry barrens are found on scattered outcrops on the Atlantic coast of Nova Scotia from the  Aspotogan Peninsula to Canso, and not elsewhere in NS or in Canada. In the U.S., there are a few sites where it may still occur  in northern-eastern Maine but at most such sites, Jack Pine has  been replaced by Pitch Pine, the fire tolerant pine found on rock and sand barrens from Maine to Florida. Sean Blaney of the Atlantic Canada Conservation Data Centre has described our Jack Pine-Crowberry Barrens  as “nationally unique and globally rare”.

So our Jack Pine-Crowberry barrens are special. And some of the best expressions of them are found in our Backlands. 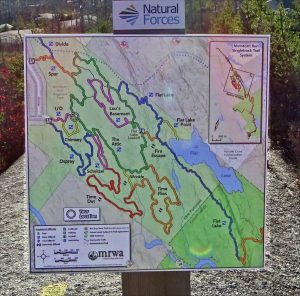 In the Halifax area, the Jack Pine-Crowberry barrens are most readily accessible via the trailhead for the Osprey Trail; it’s located on Alibaster Way at the southern edge of the Governor’s Brook residential area on the Halifax south mainland.

For the exact location, view the Trailhead on Google Maps. The Osprey Trail is super-popular for both both mountain-biking and walking. The Osprey Trail is one piece of a larger network of trails in this area built and maintained by the McIntosh Run Watershed Association.  With the open vistas, and generally wide routes, I have not had any difficulty as a walker there and the mountain bikers are very respectful of walkers.

Recently burned and not burned barrens
There are a couple of features that make this location an especially interesting place to explore our Jack Pine-Crowberry barrens.  One is that close to the trailhead there are areas that burned in the 2009 Spryfield fire lying in juxtaposition with areas that didn’t (see the photo at the top of this page); go towards the north and more of the barrens did not burn, go to towards the south and most of the barrens burned. 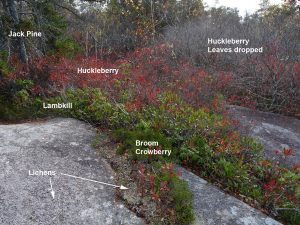 In areas that burned, the Jack Pines are coming back in abundance and are now 1-2 meters  tall,  while in areas that did not burn they are 3-5 meters tall  (or more, or less, it depends on the site) and beginning to show signs of old age; these older trees are ready to burn, so don’t light any matches there! The typically waist-high huckleberry, which comes back quickly after fire is abundant in both the areas that burned in 2009 and those that didn’t; it’s the huckleberry that turns fire-engine red in the fall.  Often in the mix are evergreen lambkill shrubs, typically knee-high, and lowbush blueberry, knee-high and less.

Broom Crowberry is a low growing, heathy plant that typically forms a mat extending from the leading edge of huckleberry onto the most exposed, bare (or lichen-only colonized) pavement of the barrens. It expands slowly, and the mats are still fairly limited in size in the areas that burned in 2009; they are much wider, up to a couple of  meters or more in width in  areas that didn’t burn in 2009. 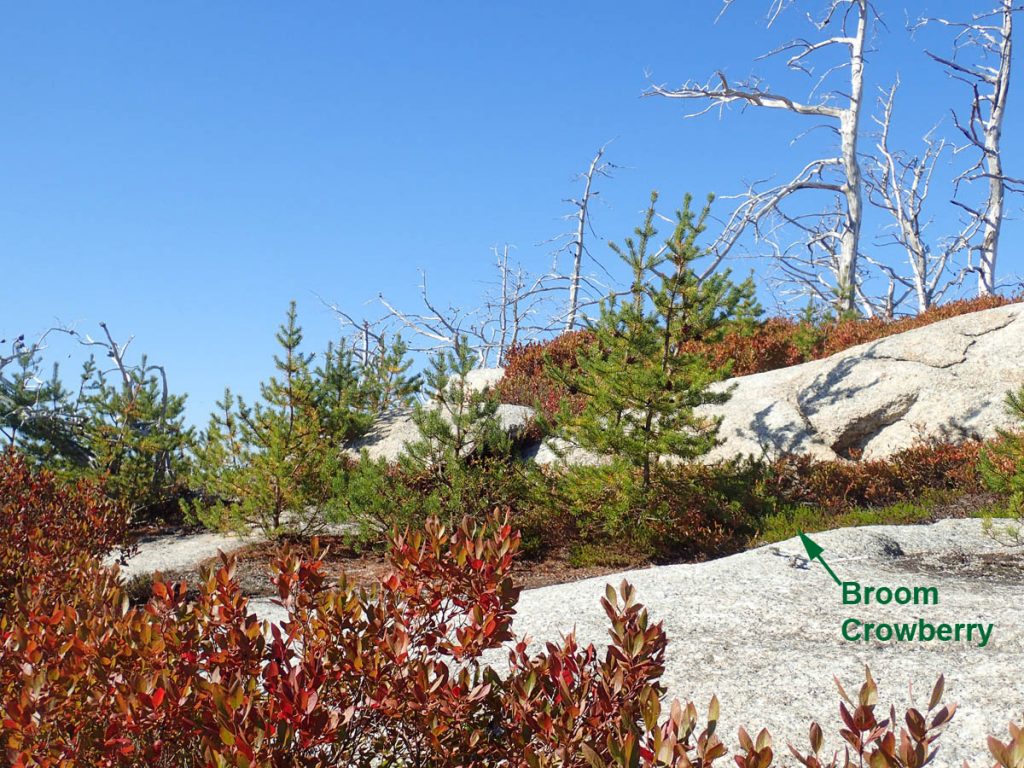 Whalebacks
The other neat feature of this area is provided by the glacial geology which  is on full display at this site as a “field of whalebacks”. In geology, a whaleback is “A landform having the form of the back of a whale.” The term is commonly applied to sand dunes but here we have them carved in granite and oriented NW/SE, in the direction of movement of glaciers in the last glaciation. In other places, people celebrate even one of these structures (Google “whaleback, geology“), but on the Osprey Trail and environs we have a field of them that extends as far as the eye can see, like a huge pod of whales.

It’s not hard to see why they are called “whalebacks”! Left: Field of Whalebacks in an area that burned in 2009, photo on Nov 7, 2021. Right at top: Brydes Whale (from Wikipedia). Right at bottom: a school of Beluga whales (from Wikipedia).

The longitudinal centre of each whaleback is typically bare or lichen-covered; sometimes there are little islands with a Jack Pine or two, but typically the Jack Pines occur towards the edges with Huckleberry below them and Broom Crowberry forming a mat between the huckleberry and the bare rock. In the depressions between the whalebacks, there can be quite dense, bushy  vegetation, with birch, spruce and aspen trees; in the deeper, wetter depressions, there are   aquatic plants such as leatherleaf and Rhodora.

& Still more attributes of the barrens
Rhodora is an Azalea, one of a dozen or so native azaleas found in eastern North America.  It is the only one in NS, but in in my mind,  it is the most beautiful. (Emerson thought so too!) It flowers in late May, early June. So that’s another great time to visit our pine barrens. The abundant lambkill produce beautiful clusters of pink flower in late June into July, and lowbush blueberries are abundant towards the end of July. 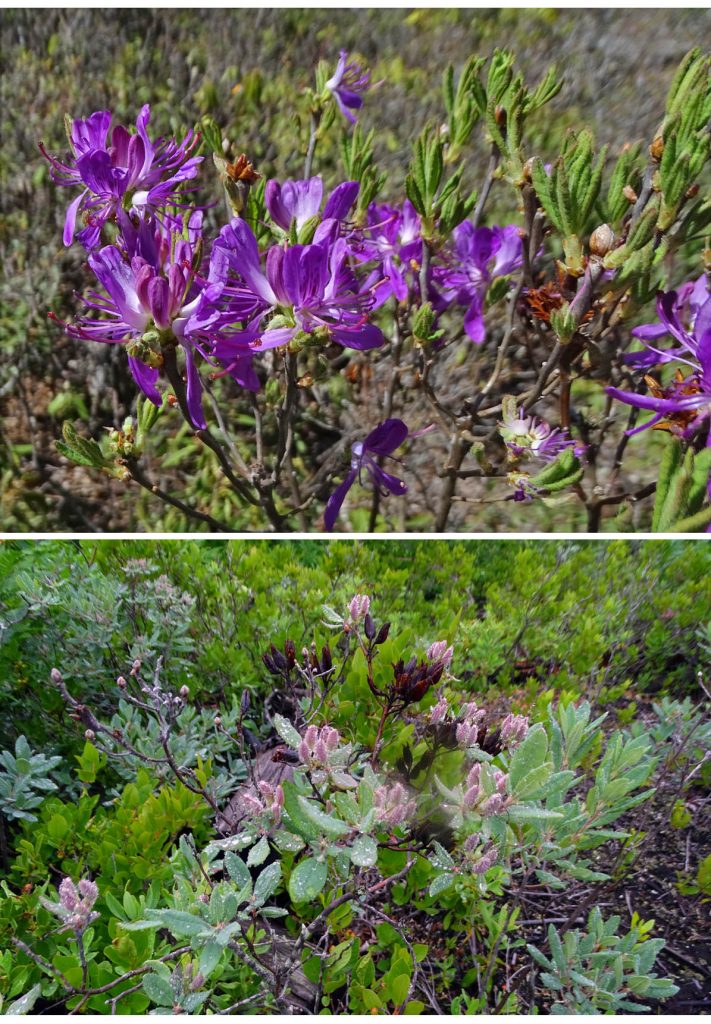 Rhodora in depressions between whalebacks.
Top: in flower on May 29, 2022.
Bottom: with fully expanded leaves and in fruit, July 16, 2021 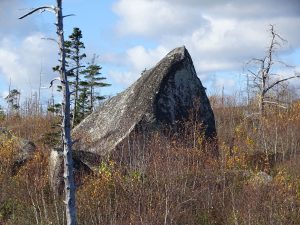 It’s also a good spot for birding, the most prominent birds being the ospreys which nest on especially constructed tower near the trail head.

Then there are the “erratics“…

I could wax and wane a lot more about our pine barrens and the Backlands in general, but ‘better to visit them. Any time! 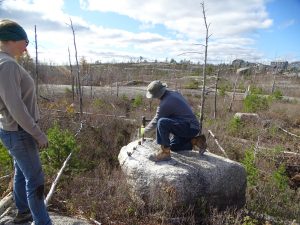 MWRA volunteers use some traditional
techniques to cut granite slabs from an erratic.
They will be used to ‘hard tread’ a wet area
on the trail. Photo on Nov 7, 2021

Regeneration of Forest and Barrens after the Spryfield Fire of April 30, 2009
Photo-essay by Richard Beazley and David Patriquin.  On April 30/May 1, 2009, an intense forest fire “cut a swath though Spryfield, Purcell’s Cove and Ferguson’s Cove.” (Chronicle Herald May 2, 2009). This set of photos  illustrates the regeneration of vegetation over the ensuing 16 months.

Request for zoning change, if granted, would seriously undermine ecological integrity and recreational potential of the Purcell’s Cove Backlands 4April2022
Post on this website April 4, 2022. A proposed development could impact Ecological Integrity and Recreation Value of these barrens 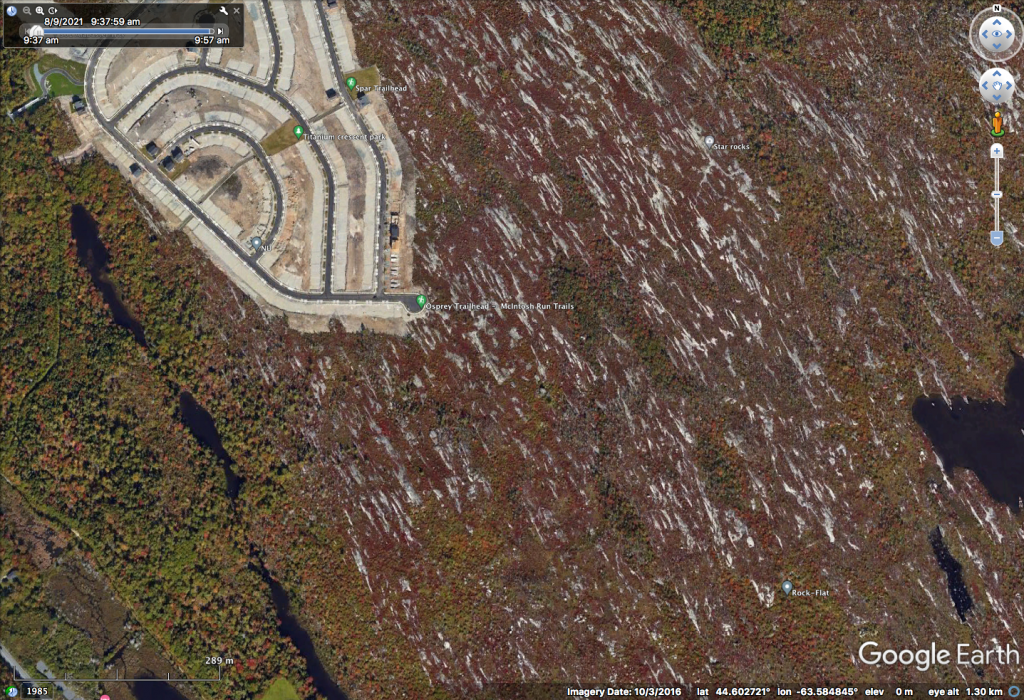 Screenshot from Google Earth, the white spots are the exposed surfaces of whalebacks. Note overall orientation NW/SE. Imagery on Oct 3, 2016 – the reddish colour is conferred by the huckleberry leaves going into their early fall colouration, a dark red. Later, just before they fall, they turn fire engine red. 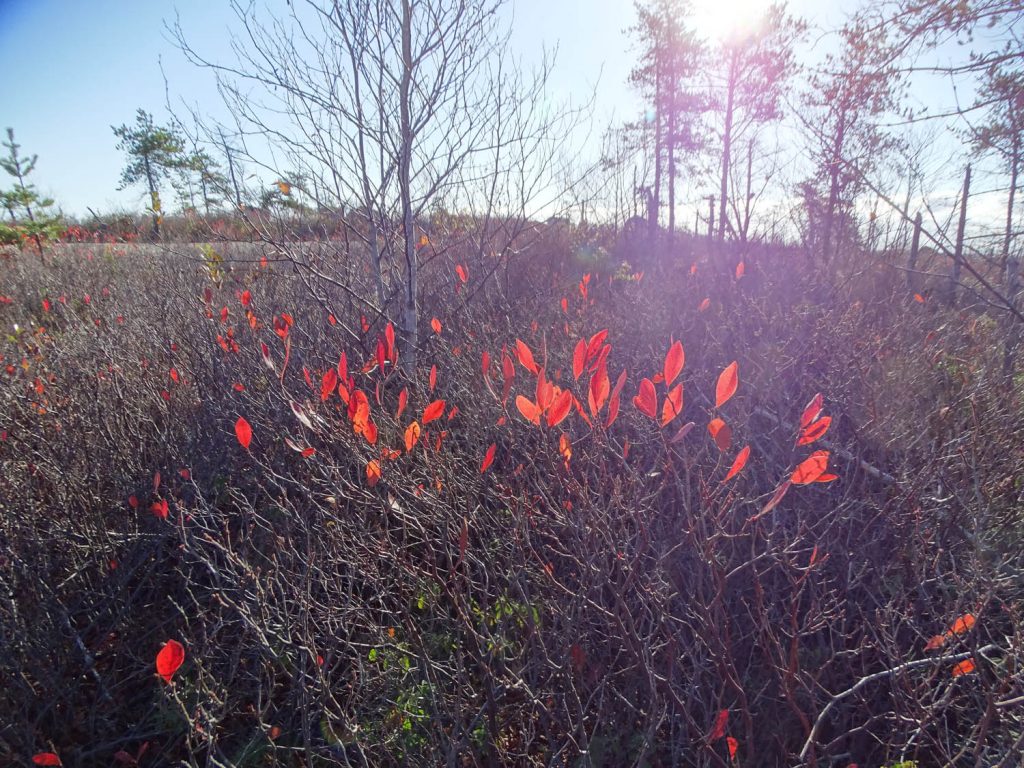