One of the ways I interact with the Backlands is that I often lead public hikes there focused on the natural history of the Backlands.

I think about the Backlands with of two different hats on. My background is in conservation biology and one part of my life in in Nova Scotia was working for the Nova Scotia Nature Trust which has some land protected in the Backlands.  So I worked on that project and learned about the ecology there.

There are a number of threats and challenges to the Backlands. I would say one of them is that it there is  not a strong enough conservation priority,  including for some of the owners of the Backlands.

So, for example, HRM has some land back there and they have worked towards conservation in some ways but there’s more to do including lands that they own or could own; and the Crown as well own lands back there but it is not formally protected. 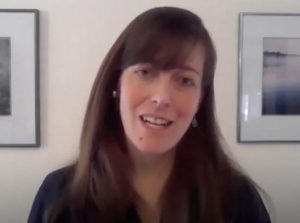 Karen McKendry is the Wilderness Outreach Coordinator with the Ecology Action Centre; previously worked the NS Nature Trust, and she founded the Young Naturalists Club of Nova Scotia. Karen lives close to the Backlands and is a regular visitor there.

Also the full extent of that particular ecosystem (Jack Pine-Broom Crowberry barrens) is not well known.

One of the mapping sources you could use would be the Forest Resource Inventory. However it is poor at mapping this particular type of ecosystem; it’s really better created to map forest stands with a fairly closed canopy;   once the canopy drops below about 50% they say it’s not really merchantable timber forest, so they call it barrens or rock barrens.

So we do not have a proper understanding of the exetent of the Jack Pine-Broom Crowberry ecosystem there.  We should perhaps be into ecosystems conservation by parcel if we knew more excatly what’s where.

So there’s a lot of technical stuff.

I’m going to take off my conservation biologists hat and be a trail runner and hike leader. So it’s a part of this emerging or re-emerging role of humans in nature and the Backlands specifically.

My understanding is we don’t know a lot about the Indigenous interaction with the Backlands, and that’s to our detriment; so that’s an area that we need to understand more about.

Currently I see people using the Backlands for all sorts of great reasons because we know time in nature can be great for your health. I meet people back there who were hiking and dog-walking and mountain-biking and taking their kids around the looking at plants and picking berries and doing all sorts of neat stuff and that’s really encouraging.

And I’ve seen increases in people using the area especially since the trails were more fully developed by McIntosh Run Watershed Association.

I also see an increase in behaviours that are not compatible over the long term. I do see all sorts of things back there, e.g.,  more dog poop, people making fires, people cutting vegetation to bring home and put it on a display; I have even seen seen people using tiny remote controlled monster trucks!

So we’re having  predictable human behaviour and all sorts of new things; I’ve seen people use drones back there as well.

Wildlife management and ecosystem management is really people management. So I think we need to wrap our heads around how to manage people for the benefits that it offers people but also to control behaviours that ultimately are going to destroy the Backlands even if our intention is still to love it – we could love it to death!

But for now I’m so grateful for a lot of  people’s work that’s gone into better knowing the Backlands and in a number of cases protecting it.

So I’m excited to keep working at it and  that we’re a coalition to keep doing more of those things.