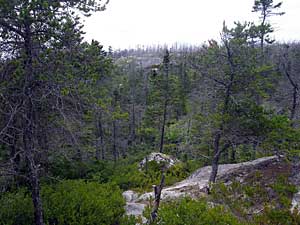 A remarkable feature of the Backlands is that there are very few exotic plant species within in its confines.*
*“The Backlands” are broadly defined as the undeveloped lands that occupy most of the area  enclosed by Herring Cove and Purcells Cove Roads and extend from Williams Lake at the northwest to Power’s Pond at the southeast (see Map)

It’s remarkable because roughly 1/3rd  of the approximately 2400 vascular (higher) plant species in Nova Scotia  are species of exotic origin.* Most of these exotic species are species of human-disturbed habitats. A large chunk of them arrived here with the early settlers, but exotic species also continue to arrive here either deliberately or inadvertently and some of them to naturalize (go wild).
* View Hill, N.M., and Blaney, C.S. 2009. Exotic and invasive vascular plants of the Atlantic Maritime Ecozone. In Assessment of Species Diversity in the Atlantic Maritime Ecozone. Edited by D.F. McAlpine and I.M. Smith. NRC Research Press, Ottawa, Canada. Pages 1–18; The floral Elements of Nova Scotia by NM Hill in Nova Scotia Plants, pp vii-xv.; Atlantic Conservation Data Centre; 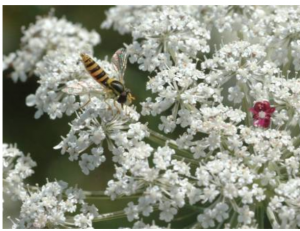 Wild pollinator on Queen Anne’s Lace in August.
Queen Anne’s Lace is a very common exotic on
roadsides and fields in NS, but is not yet in
the Backlands. View Weedy immigrants adorn N.S.
(CH article, 2013)
Would its occurrence in the Backlands be directly
harmful? Likely No, and it could be regarded as beneficial,
as healing  anthropogenic disturbance.
Would it indicate some loss of Ecological Integrity, e.g.
associated with recreational activities?  Yes

Of the 800+ exotic species in NS, only a handful are considered “invasive“, meaning a species “that is regenerating in the wild in sufficient numbers to influence the dynamics of native plant communities”; and fewer still are invasive pests, meaning “an invasive species that is likely reducing native species biodiversity or is markedly affecting ecosystem function”.

Hill and Blaney wrote in 2009 that “there has been no incontrovertible demonstration that any exotic species in the AME ]Atlantic Maritime Ecozone] fits this definition [for an invasive pest]. However, there is a paucity of relevant studies, especially for NS, but also more generally. Some studies suggest that alarm over certain species impacts on natural system is not scientifically justified. Others reveal previously unsuspected and impacts, e.g. on native caterpillars.

View Invasive species in Nova Scotia (on this website) for a list of species generally considered to be invasive in NS currently.

While invasive exotics may be directly harmful to native ecosystems, the presence of any exotics can be taken as an indicator of some loss of “ecological integrity” of native ecosystems (LaPaix et al., 2009). Most commonly, presence of exotic species in largely  intact native systems is associated with areas of direct human disturbance, e.g. by roads, trails, residences.

In our survey of the “Williams Lake Backlands” in 2013, we noted only two exotics out of 112 vascular plant species. We commented:

The two exotic species (Japanese Knotweed and Japanese Barberry) were found only close to Purcell’s Cove Road. The absence of exotic species otherwise attests to high ecological integrity of the WLB, i.e. they are not overly impacted by human disturbance (LaPaix et al., 2009).

I had not been spending much time in the Backlands in the last several years, but recently I have been revisiting some old haunts – and I am seeing some exotics in a couple of places where I had not observed them previously – (i) invasive Rosa multiflora on Lawsons Brook and (ii) several exotics on barrens in the Governor’s Brook/Mac Run area. 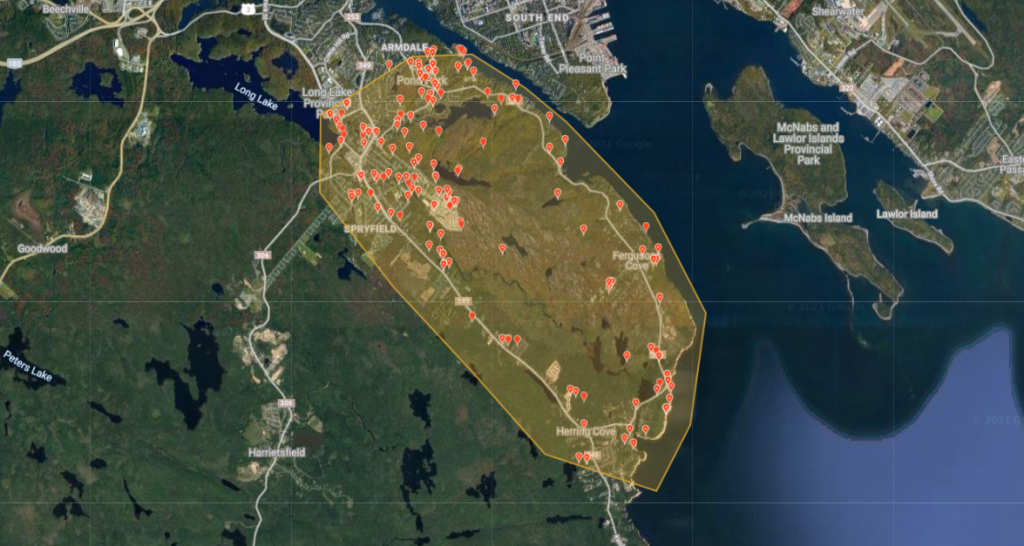 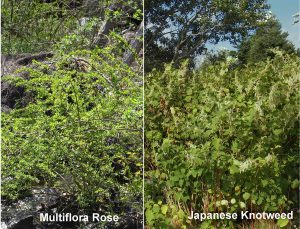 Given their limited occurrence within the Backlands currently, I think it would be both practical and of value to keep an eye out for invasive exotics such as Rosa multiflora and Japanese knotweed that are already abundant just outside of the [undeveloped] backlands, and removing or repeatedly cutting back any colonies sited within the undeveloped Backlands. Then heavy infestations can be avoided.

What to do or not to do about the more numerous and pervasive suite of ruderal exotics such as those listed above that are moving into the barrens is not so straight forward. I think that such colonization is an inevitable consequence of fairly intensive recreational use, and really, the only way to stop them is to stop or severely limit the recreational use. An approach used in some jurisdictions is “Consolidating rather than dispersing recreational use; research generally indicates that this reduces the human footprint and corresponds with a reduced overall impact on wildlife.” (Miller et al., 2020)

Clearly this is an issue that (a) deserves more investigation/monitoring, and (b) needs to be discussed within and among the various organizations that have an interest in the Backlands, perhaps within the context of a broader conservation & fire management strategy.