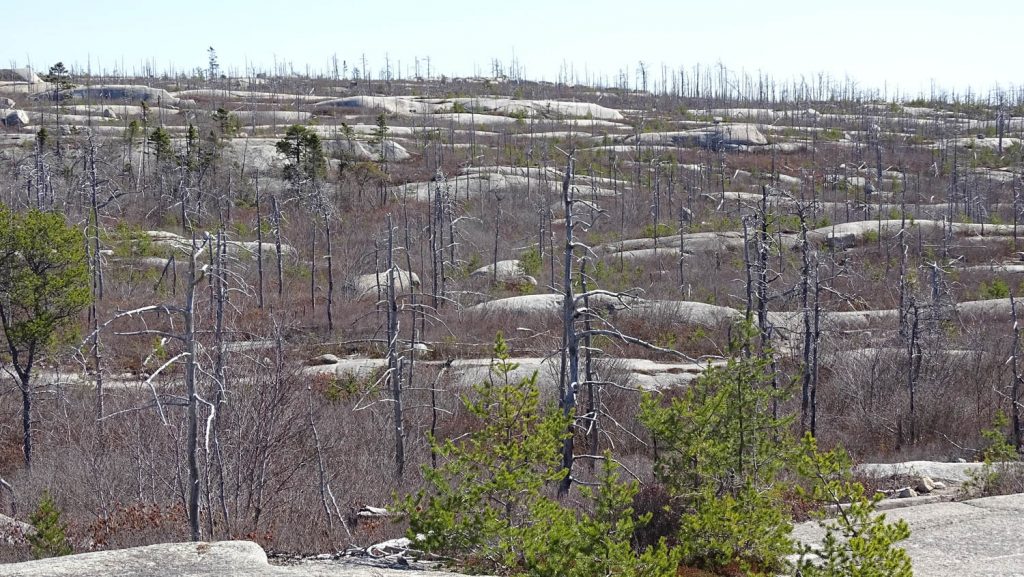 I describe this area – roughly enclosed by the red boundary in the map below –  as a ‘Field of Whalebacks’. It’s a huge, mostly open area of Jack Pine-Broom Crowberry barrens with pockets of smaller and larger wetlands, some treed and some not and some pockets of wettish closed-canopy  black spruce forest. Much of the area was burned in the “Spryfield Fire” of 2009.

Left: Area of whalebacks by Governor’s Brook/Mac Run. Right: location of  Trailheads 1 and 2. Maps from www.hikingproject.com Some of the trails or portions of trails are informal and NOT maintained by the McIntosh Run Watershed Association (Mac Run= McIntosh or Macintosh Run. The spelling is variable within HRM)
Click on image for larger version.

It has also become, mostly within about the last 5-7 years, a very popular area for walking and mountain biking. The McIntosh Run Association has laid out and maintains an extensive trail network with appropriate signage, promotion of leave-no-trace practices etc. Deservedly, the area is advertised as one of the assets of living in the Governor’s Brook development; indeed, it is an asset to all of Halifax, even Nova Scotia.

Several factors could be expected make the area susceptible to colonization by exotic plants:
(i) the largely open (unshaded) nature of the barrens – most exotic plants species require or do best in open, unshaded environments 1;
(ii) physical disturbance associated with recreational use – most exotics in NS are “ruderals”2 which are plants of disturbed habitats; as well,  the native vegetation is still expanding over areas where it was burned off in 2009, i.e. there are still many empty spaces naturally.
(iii) nutrient enrichment associated with dogs, and humans – doggie bags are picked up, but some deposits may be missed and urine is nutrient rich.  The plants species of the barrens are in general  “stress tolerators”2 that can thrive in nutrient-poor environments, but they do not compete well with ruderals, plants capable of rapid growth given nutrients, water and light. Thus nutrient additions can shift the community dynamics.
(iv) nearby, recently established exotic-rich habitat (roadsides, lawns, gardens etc) provides a new,  ready source of propagules.
1. Table 1 in Hill, N.M., and Blaney, C.S. 2009. Exotic and invasive vascular plants of the Atlantic Maritime Ecozone. In Assessment of Species Diversity in the Atlantic Maritime Ecozone. Edited by D.F. McAlpine and I.M. Smith. NRC Research Press, Ottawa, Canada. Pages 1–18.
2. View Plant Strategies in Wikipedia 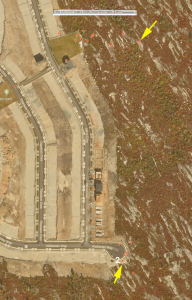 Sites 1 and 2 on  iNaturalist map;arrows point
to dandelions furthest from trailheads

On May 17, 2021,  I conducted a quasi-formal, opportunistic survey of areas adjacent to two trailheads  when dandelion was in full bloom and hyper-abundant nearby. Site 1 is in an older trailhead that has been accessed regularly for a longer period (perhaps since about 2016); Site 2 is more recent (2019?) and now serves as the major trailhead. I walked from each of the trailheads to the last point I could see any dandelions and then a little bit beyond, noting locations of dandelions and other prominent exotics (not including graminoids). 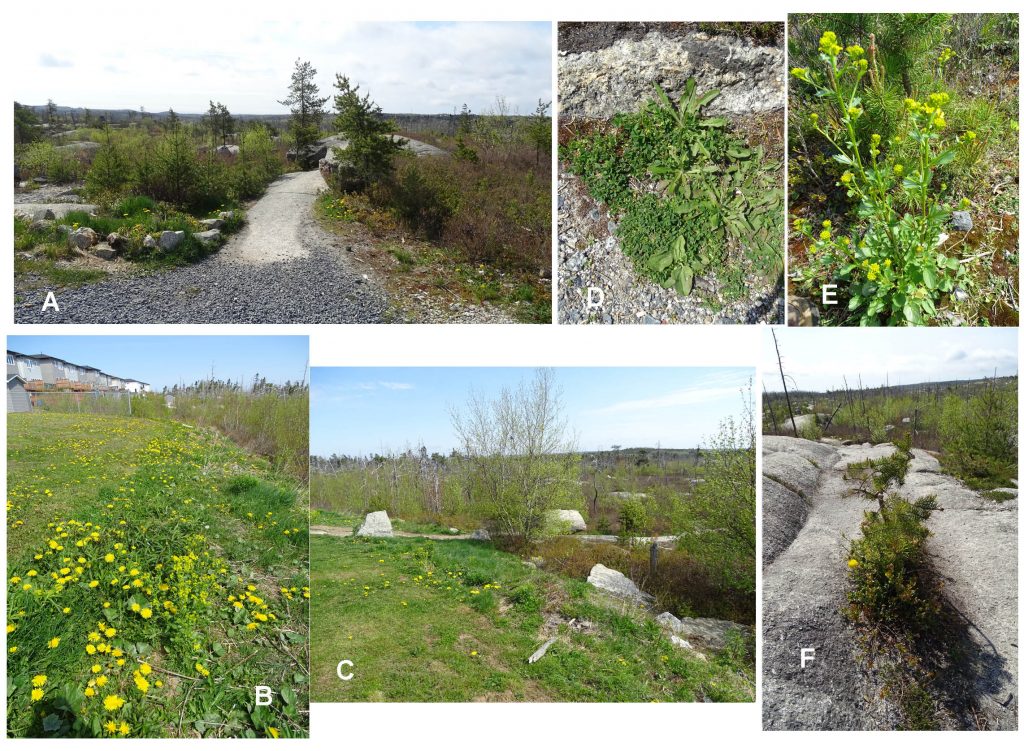 None of of these species is currently cited as invasive in NS, and I think only cow parsley has been considered a serious invasive elsewhere in North America. White clover, while exotic, is considered by many to be desirable in pastures and lawns, providing nitrogen (it is a legume and fixes N2 gas from the atmosphere), and its flowers support pollinators. While dandelion has long been a target of lawncare, there is new awareness of its benefits for pollinators (e.g., see CBC May 22, 2021: Lawns gone wild: Why you might just have to learn to love dandelions).

Since about 2005, I have hiked trails all over HRM (Halifax Co,) and have kept an eye out for exotics on wilderness trails especially. At least up to about 2017 I virtually never saw any, except in well trodden places like trails in the Crystal Crescent Beach area. I have likewise seen very few in the Backlands including the Governor’s Brook area until the last 2 years. So I suspect that exotics are increasing around trails in wilderness areas. For the reasons cited above, the heavily visited areas of barrens would be expected to be especially susceptible to colonization by exotics, and these very preliminary observations suggest that is happening quite quickly.

Should movement of exotics into the barrens areas associated with recreational activities be a matter of concern?

I think there is value in keeping an eye out for invasive exotics such as Rosa multiflora and Japanese knotweed that are already abundant just outside of the [undeveloped] backlands, and removing or repeatedly cutting back any colonies sited within the undeveloped Backlands. Then heavy infestations can be avoided.

What to do or not to do about the more numerous and pervasive suite of ruderal exotics such as those listed above that are moving into the barrens is not so straight forward. I have some concern that loss of Ecological Integrity suggested by the presence of exotics, if continued, could lead eventually to very different plant communities.

I think that colonization of the barrens by exotics is an inevitable consequence of fairly intensive recreational use, and really, the only way to stop it is to stop  or severely limit the recreational use. An approach used in some jurisdictions is “Consolidating rather than dispersing recreational use; research generally indicates that this reduces the human footprint and corresponds with a reduced overall impact on wildlife.” (Miller et al., 2020)

Clearly this is an issue that (a) deserves more investigation/monitoring, and (b) needs to be discussed within and among the various organizations that have an interest in the Backlands, perhaps within the context of developing a broader conservation & fire management strategy.