Several groups, and likely more than we are immediately aware of, have had interests in the Backlands over many years related to conservation, recreation, artistic and other activities. The impetus to form a Backlands Coalition developed following the high level of public interest in the proposal to extend sewer and water services further along Purcell’s Cove Road, and the ultimate shelving of the feasibility study in the early fall of 2013. A major reason for opposition to 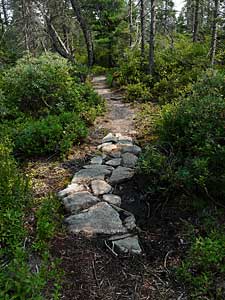 such extension was its coupling to new development in the Backlands. Overwhelmingly, residents of the area, and many who reside elsewhere in Halifax Regiional Municipality but visit and value the Backlands, expressed a desire to keep as much of it as possible in a natural state.

In the fall of 2013, representatives from several organizations with interests in the Backlands (Williams Lake Conservation Company, Purcell’s Cove Neighbourhood Committee, McIntosh Run Watershed Association, Halifax Field Naturalists, Woodens River Watershed Environmental Organization) met to talk about working together to protect as much of the Backlands as possible from new development. It was agreed that as the “Backlands Coalition,” our mission is to ensure no loss of wildlife habitat in the Backlands and to preserve them for natural, historical, cultural, conservation, educational, recreational and common use. A steering committee consisting initially of representatives from the groups that met in the fall, subject to formal approval by those organizations, will be responsible for the day-to-day business of the Backlands Coalition and will report back to and seek feedback from all member groups at regular intervals. The Backlands Coalition will remain an informal coalition.