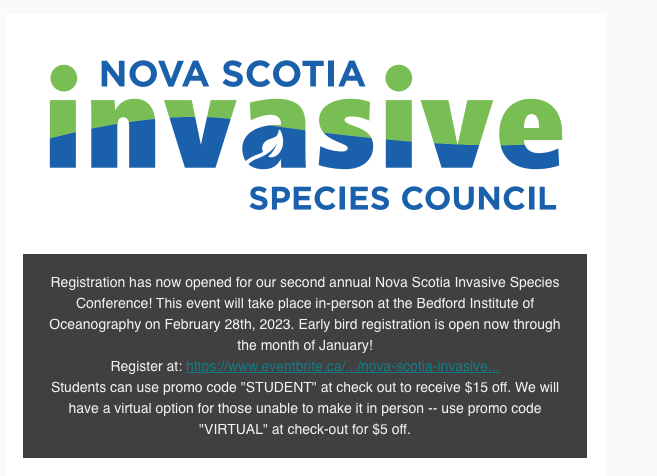 “The second annual Nova Scotia Invasive Species Conference! This event will take place in-person at the Bedford Institute of Oceanography on February 28th, 2023”

———
At the moment (early June 2021), there appears to be no up-to-date ‘official’ list of invasive plant species for NS. Several organizations have made attempts to coordinate information on invasive species in the province over the last several decades. Currently and, hopefully, finally,  this role is being assumed by the Nova Scotia Invasive Species Council, set up, apparently, in 2019 (the domain was registered on 2019-04-25; earliest website post June 2, 2020). From About Us

The Nova Scotia Invasive Species Council (NSISC) is a collaborative, volunteer-based group of individuals and organizations that aims to raise awareness and promote a coordinated response to the threat of invasive species in Nova Scotia. The NSISC builds on the experience of the former Invasive Species Alliance of Nova Scotia (ISANS), which was based at Acadia University from 2007-2012. The NSISC is a recognized provincial chapter of the Canadian Council on Invasive Species (CCIS) (https://canadainvasives.ca). Read more

Under “TERRESTRIAL INVASIVE SPECIES FACTSHEETS”, the NSISC website currently offers 2 Factsheets, those on Giant Hogweed (no distribution within NS cited; there was a population within the Backlands area, on a site on Oceanview Drive up to about 5 years ago when the vacant property was developed) and Oriental Bitter Sweet (currently limited to the Annapolis Valley).** See 6Dec2022Update below

Under Species to Watch:

Dog Strangling Vine (Cynanchum rossicum & louiseae) is cited under under “Species Plaguing Other Parts of North America.
A July 13, 2020 blog post on the NSISC website announced that “Dog Strangling Vine has been found recently (July 2020) in Kentville, Wolfville and Dartmouth, Nova Scotia.”

NSISC now has Fact Sheets for the following (in the order as presented on their website, by common name):