A neat piece of Nova Scotia’s geological history can be seen in the “Williams Lake Backlands”  (most of which is now in the Shaw Wilderness Park): a contact zone between between the granitoic rocks of the South Mountain Batholith and the black slates and siltstones of the Halifax Formation.  It is well exposed between between Williams and Colpitt Lakes. 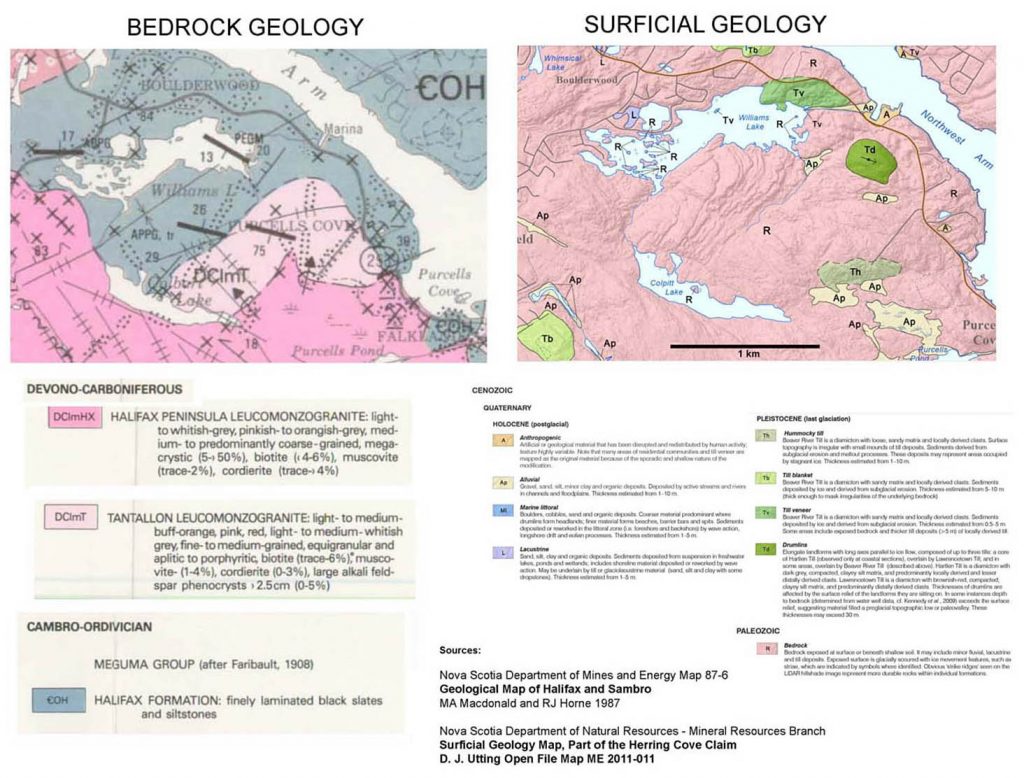 To the northeast of  the contact zone between Williams and Colpitt Lakes, outcroppings of highly folded and metamorphosed Halifax Group black slates and siltstones  rise steeply and from the highest points afford a panoramic views of Williams Lake. To the southwest, rising less abruptly, are the granites of the South Mountain Batholith.

“Despite sounding like something out of Harry Potter, a batholith is a type of igneous rock that forms when magma rises into the earth’s crust, but does not erupt onto the surface. The magma cools beneath the earth’s surface, forming a rock structure that extends at least one hundred square kilometers across (40 square miles), and extends to an unknown depth.” – USGS Earthword 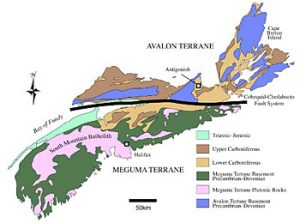 Generalized geologic map of Nova Scotia.
From Schenk et al., Figure 2; click on image for
the article and a large version of  this map.

The South Mountain batholith formed circa 380 million years ago. It extends “in an arc from Yarmouth to Halifax and outcrops over an area of 10 000 km2…the largest body of granitoid rocks in the entire Appalachian system” (NSM);  as it pushed its way into the older  sedimentary rocks of the Meguma Supergroup above, it heated and folded them. Successive glaciations over the last 3 millions scraped off the softer rock above the batholith, eventually exposing the harder granites and revealing the contact zone. (See references below for more about the fascinating geological history of Nova Scotia.)

Areas in the vicinity exposed bedrock on both the granitoic and the Halifax Formation  bedrock support the “Globally Rare and Nationally Unique” Jack Pine Broom Crowberry communities, a type of fire-adapted and fire dependant pine barrens. Some have burned within the last dozen or so years. The oldest unburned stands are  60+ years old. They are most striking in the fall when the black huckleberry turns fire engine-red. Repeated fires at intervals of 50+ years are a natural occurrence in these areas. 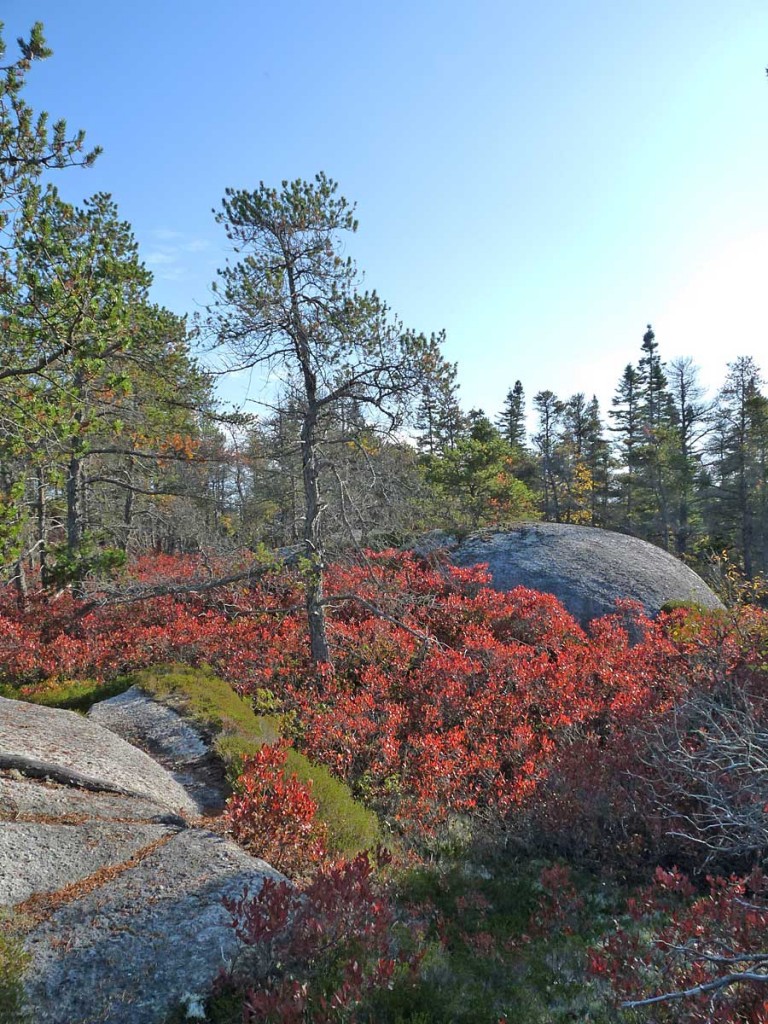 Jack Pine-Broom Crowberry barrens on granitoic bedrock in October. The red shrubs are black huckleberry. A patch of low growing Broom Crowberry (green) can be seen in the foreground

A major area of water storage and movement occurs  along the low lying contact zone  between Williams and Colpitt Lakes.   The water moves below-  and above-ground and through wetlands; most of it drains into Williams Lake but close to Colpitt Lake, into Colpitt Lake. 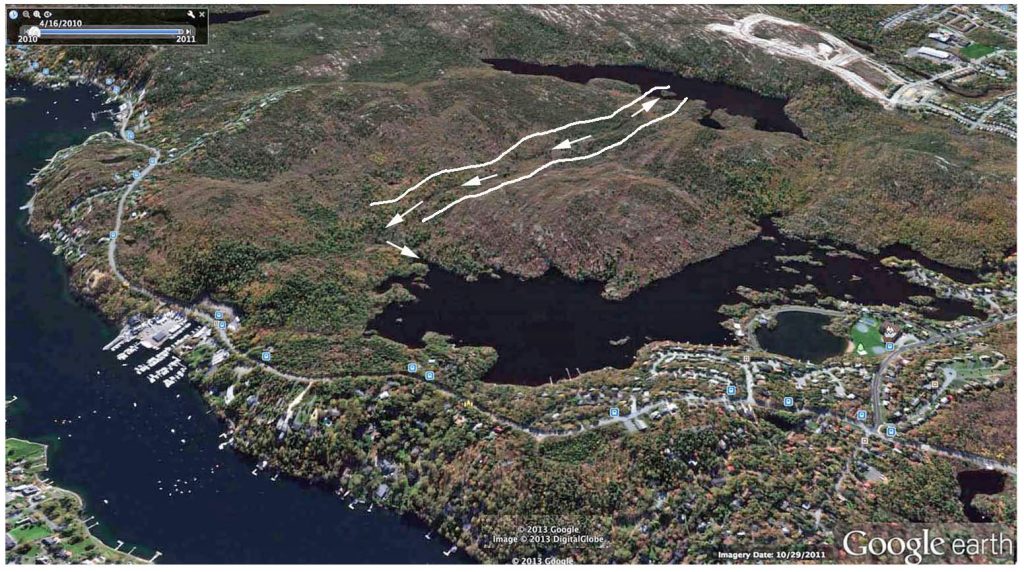 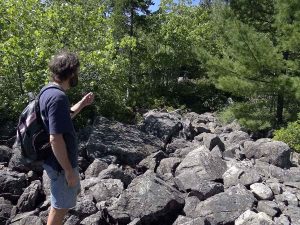 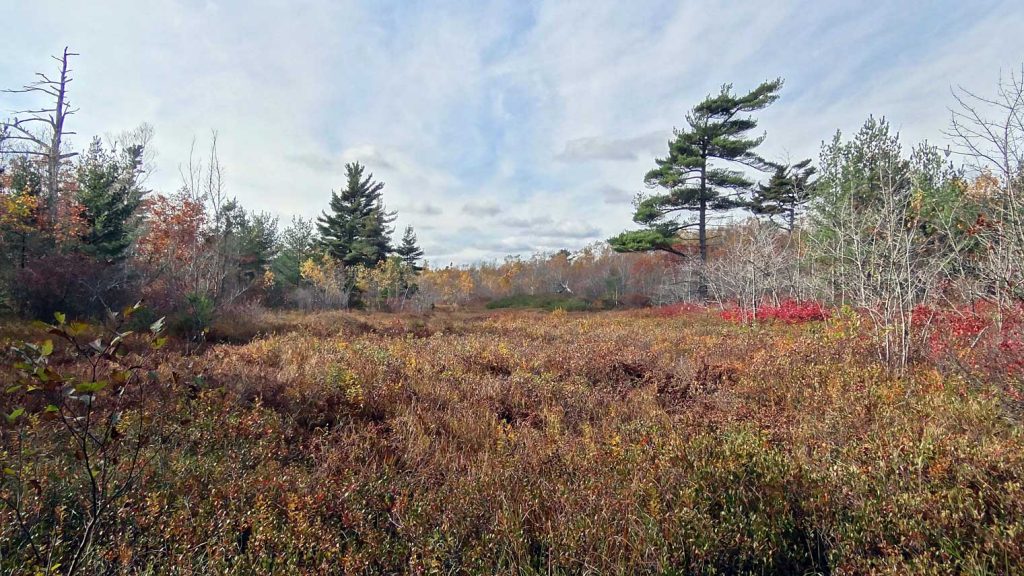 Boulder fields  with massive, angular black boulders occur towards base of the outcrops and ‘spill’ into wetlands. These boulders were deposited as the last glaciers in the area retreated; the rocks are so angular they look to the untrained eye (mine)as they might have been cut from a quarry. 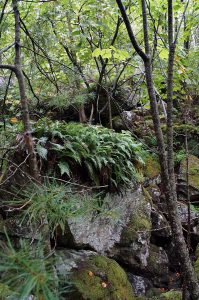 As water moves towards Williams Lake from the ‘Great Wetland’ it goes entirely below rough rocky ground  in pine/oak forest for about 100 meters and then surfaces in a series of treed and sedge-and fern-lined wetlands until it reaches ‘The Gully’. There it spills down a steep slope below massive boulders in the shade of oaks and striped maples that hang over the gully.  Evergreen polypody ferns adorn some of the boulders. From The Gully, water moves as slower moving stream through a large floodplain, through  a fen and then converges  on  a  fast moving stream, and finally into a little bay on Williams Lake  where beavers are always busy. 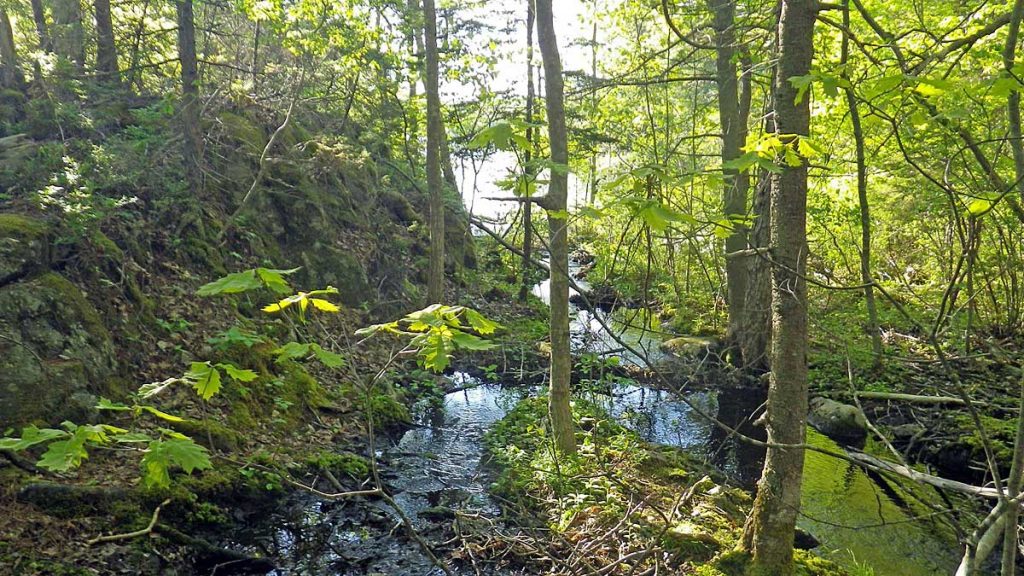 On the Colpitt end, water moves off steep slopes though boulder fields,  a serene floodplain forest and by a large lakeside fen into the beautiful, boreal-like  Coplitt Lake; the lake is well hidden from the settled landscape beyond by a steep forested slope that rises above the lake. 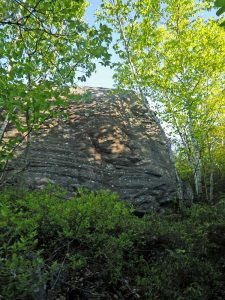 Smaller and larger erratics are scattered throughout this landscape. It is a mosaic landscape with many flavours and moods, and little nooks where one can not see or hear any sign of the busy world outside. Places to truly escape.

From WLB Summary
The WLB present a mosaic of landscapes and plant communities associated with high variability on a fairly small scale in the topography, depth of soil/till, drainage and surface water storage and in the ages since disturbance of the associated plant communities. That variability in turn is related to the presence of glacially scoured hard granite outcrops of South Mountain Batholith, outcroppings of highly folded and metamorphosed Halifax Group black slates and siltstones of the Meguma Supergroup, a contact zone between the two rock types, and glacial till. Overall, the plant communities are those of nutrient-poor, acidic environments and of fire-, wind-, and pest-driven disturbance regimes within a moist temperate, coastal region. Exotic (non-native) species are found only close to roads and houses at the edge of the WLB. These are “old process” plant communities with a high degree of ecological integrity.

Nova Scotia Field Guide
Arthur D. Storke Memorial Expedition, 2012. Department of Earth and Environmental Sciences, Columbia University “This guide was prepared following the 2012 Arthur D. Storke Memorial expedition to Nova Scotia, with broad overviews of Nova Scotian geology and detailed itineraries and descriptions of individual outcrops visited. Our hope is that this guide can serve as a blueprint for future trips to Nova Scotia. For faculty and students in the northeastern United States, outstanding outcrops detailing the Phanerozoic history of continental collision and rifting are not that far away. Nova Scotia is waiting.

Geological Notes
The Backlands are a glacially sculpted terrain, with features such as erratics, whalebacks and drumlins. Granite and “bluestone” metamorphic rocks were once quarried in Purcell’s Cove, for buildings and fortifications. Geologist Marcos Zentilli prepared these notes for a set of Jane’s Walks into the Backlands on May 3, 2014.

Tracing garnet origins in granitoid rocks by oxygen isotope analysis: examples from the South Mountain Batholith, Nova Scotia
J.S. Lackey et al.. 2011 The Canadian Mineralogist 49(2):417-439 “Garnet in Nova Scotia’s peraluminous South Mountain Batholith (SMB) displays diversity in its texture and composition that has challenged a comprehensive explanation of its origins. In this study, we have employed oxygen isotope analysis to “fingerprint” magmatic, peritectic, and xenocrystic SMB garnets to take advantage of contrasting delta(18)O of SMB and metasedimentary country-rocks and the slow rates of diffusion of oxygen in garnet…”