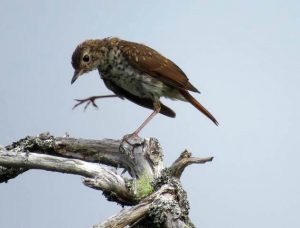 Sparrows Hawks & Doves (SHD) is a project of Williams Lake Conservation Company (WLCC) in cooperation with Backlands Coalition & Urban Farm Museum Society of Spryfield. Our volunteers come from each of these organizations. Our funding is provided by HRM Community Project Grants and runs from April 1, 2021 to March 31, 2022.

Our primary goal is to begin a tradition of surveying the birds in the many areas of the Backlands. We want to record the number and variety of species who pass through, note those species who find the Backlands habitat to be a good place for summer nesting and keep track of successful fledging of young birds.

In addition to the bird survey, SHD: added to the public understanding of the value of the Backlands through field trips and newspaper articles; produced simple hand-held nature guide with a map to “the common birds of Shaw Wilderness Park” for use by beginning birders, youth and others who may be new to our area; brought community organizations together to provide support for bird watching in Spryfield and welcomed new people to the hobby of bird watching. Through an agreement with HRM Public Libraries the Sparrows Hawks & Doves project made a donation of about 18 books about birds. After cataloguing in the HRM Library system, these books will form a special collection located at the Captain William Spry Library. 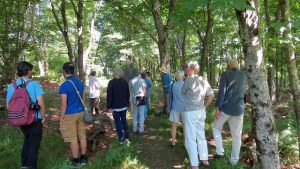 On July 24, 2021 SHD had our first public gathering marking the new partnership between WLCC, Urban Farm Museum Society of Spryfield and Backlands Coalition. We had a very good turnout (about 35 people) some who were visiting the Urban Farm for the first time and others who live in Spryfield and yet had never heard of the Backlands or Shaw Wilderness Park.  Several people were brand new bird enthusiasts. Although birding is often thought to be a sport for older Haligonians, two teens are among our participants. WLCC distributed several of our donated bird guides and displayed other bird books that will form a small reference area, possibly through the HRM public library.  Fulton Lavender (SHD advisor, bird ID expert and Spryfield resident) led the group on a tour of the butterfly garden and then into the forest for a birding event.

Ten people signed up to participate in Bird Survey field trips. Our spring and summer field trips covered a lot of ground in the Backlands. Fulton Lavender led the volunteers on each field trip. Consistent with birding ethics, our volunteers limited their use of birdsong recordings or artificial means of attracting birds. As a result, certain birds are intrinsically more conspicuous than others. Less obvious birds are often smaller, secretive and solitary nesting. Some species are active only at night. Most field trips were in the early morning, although the field trips for sighting owls were in the very early morning. Data from our field trips (April 1 – August 26) and eBird recordings from the same period estimate that a minimum of 95 different species of birds call the Backlands home at various times of the year and at various points in their migrations.

Bob and Wendy McDonald participated in the Sparrow Hawks & Doves project last summer, posting their data to eBird and sending it to us for inclusion in the project. Bob died on November 18, 2021 after a brief illness and will be missed by the many friends in Halifax Field Naturalists, NS Bird and Wildflora Societies and the Ecology Action Centre. Bob was an avid birder, nature lover, geocacher, photographer and philanthropist. He will be missed both out in the field and among his colleagues who take action to preserve the natural world.

General observations that reflect on the Backlands habitat: 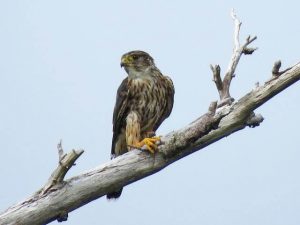 Merlin Photo by Joshua Barss Donham.
The Merlin has a Darner Dragonfly in his talon.

Backlands provides healthy habitat for many common woodland birds and waterfowl as well as some endangered and threatened bird species. The Common Nighthawk (threatened status) was sighted on two separate occasions. In July, two adult Nighthawks were seen in flight above the Backlands with two young fledged Nighthawks. This is very promising. Two endangered species sighted were the Barn Swallow and Chimney Swift. Because of the availability of a varied cross-section of habitat in the Backlands, the possibility still exists for hosting summer breeding for other endangered species such as Rusty Blackbird and Canada Warbler.

If there is no further major development in the Backlands and the shade canopy increases, there may be an increase in water which could maintain and improve habitat for the many species of birds that rely on the rich availability of insects (insectivores).

There appears to be a strong trend toward drier habitat species such as Common Nighthawk, Black & White Warbler, Chestnut-sided Warbler and American Redstart. As our environment gets hotter some species will struggle, such as the Canada Warbler and Swainson’s Thrush both who prefer a canopy and a more shaded habitat that includes mosses. We need to look more closely at plant life and the species that survive because of the diversity of an area. The essay “Ecological Assessment of the Plant Communities of the Williams Lake Backlands” by Nick Hill & David Patriquin may be a useful resource and is available on backlandscoalition.ca website.

Our understanding of the Backlands benefits from a closer look at the many wetlands. Ducks Unlimited Canada (DUC) has supported our understanding of bogs, marshes and wetland areas of the Backlands. Specifically four areas have now been assessed: the privately owned land (Church of Christ Development Corporation at GPS Coordinates: 44.616341, -63.600103) with the WESP report available on our Backlands Coalition website; the Catamaran Ponds that feed into our Governor’s Brook; the privately owned land (Battery Hill Developments at GPS Coordinates: 44.60836, -63.57826) a shrub bog feeding into Colpitt Lake; and a treed swamp with peat soil on publicly accessible land also feeding into Colpitt Lake. The DUC assessor, Emma Bocking, has joined our SHD Field trips and has completed these DUC assessments. In her notes, she points out that different wetland types naturally provide different ecosystem services based on their hydrology and ecology. This concept is also elaborated in our Backlands Coalition website essay, “Mountain Holly Washes” by David Patriquin written in May 2021.

Although the Backlands have the feel of rugged terrain when you are out hiking, their continued existence as a support for diverse flora and fauna relies on a complex web of environmental conditions, many of which are outside of our control. The health and survival of the plants, birds, mammals, insects and amphibians depends on a robust resilient habitat that meets their needs as species. Whenever there are threats to the stability of this area, we need to advocate strongly for preservation of the wildlife and land; the establishment of corridors for movement of plants and animals between habitats; and the preservation of waterways, bogs and wetlands that promote the health and survival of the Backlands. 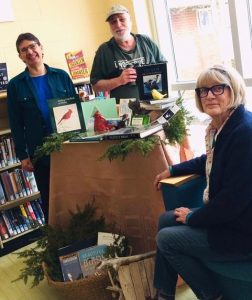 This report is compiled from data and input from core members of the Sparrows Hawks and Doves Bird Team: Fulton Lavender, Catherine Sloane, Joshua Barss Donham and Martha Leary. The Sparrows Hawks & Doves project produced results for our community through the generous help of many WLCC members including Leslie Randall, Cathy Vaughan, Philip Howard, Debbie Hall and Kathleen Hall.