Recent fire and fire management in the New Jersey Pine Barrens: a model for the Backlands? 12Jul2022 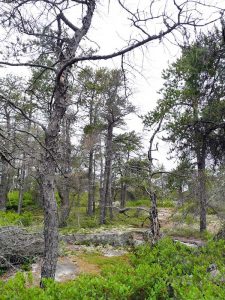 Savannah-like Jack Pine/Broom
Crowberry barrens  on
Halifax south mainland,
June 20, 2009. This old stand,
which lies close to residential areas,
escaped the fire in 2009 but is
(potentially) even more flammable today.

“Thankfully, no lives or homes were lost, as the blaze occurred in a remote part of New Jersey’s largest tract of public open space. Wharton State Forest encompasses 122,800 acres (192 square miles) in Burlington and Atlantic counties.

While 13,500 charred acres may sound like an ecological catastrophe, it is just the opposite. Fire is an essential ingredient in making and keeping the Pine Barrens what they have been for thousands of years.”

By comparison, our Spryfield Fire of 2009 burned approximately 800 hectares (1977 acres) and destroyed eight houses on a street recently developed in an area of Jack Pines. The total area of the Backlands is approximately 1350 hectares (3336 acres), so our fire was smaller but proportionally more intense and damaging to property than the larger NJ Pine Barrens Fire.

Like the NJ Pine Barrens, our Jack Pine/Broom Crowberry barrens are fire adapted and fire-stimulated systems that rebounded quickly after the fire, indeed have benefitted from it ecologically.

Fire-dependent pine barrens  on the North American landscape are today generally considered endangered or at risk  because of conversion of land to anthropogenic landscapes  and because today fire management, at least in the east of N.A. , is so efficient that the frequency of fire is below pre-European settlement levels. (From the time Europeans arrived on our shore up until about the mid 20th century, fire frequency in NS was well above that in pre-European times).

The duality of fire being both a benefit and a hazard for the N.J. Pine Barrens is recognized and addressed at least partially:

These prescribed burns are controlled fires that enhance human safety by reducing potential fuel sources on the ground. They can also benefit ecological processes and biodiversity when certain methods are used…

Wildfire risk is one important reason to keep permanently preserving land within the Pine Barrens.

We could use a similar approach for the Backlands. At least we could start talking about it before the next big blaze occurs.

This entry was posted in Conservation, Fire Ecology. Bookmark the permalink.