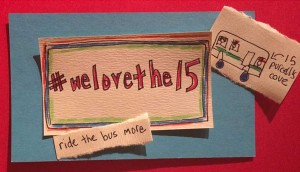 Dear Residents of Purcell’s Cove and surrounding areas
We regret to report that the Transportation Standing Committee voted today FOR the motion to cut back the #15 bus. The matter now goes to Council for a final vote (see below).

The vote today was as follows:

The motion that passed would replace the #15 bus with the #415 bus, which would operate for six runs per day, three in the morning at peak times (i.e. rush hour). There will be NO weekend or holiday service. It is likely that this change will take effect in August 2019 or sooner.

The following people for spoke on behalf of the #15 Bus Action Committee at this meeting. Their remarks were eloquent and timely, and we appreciate the time they took to prepare and attend the meeting. Thanks to everyone who helped to make our case.
Geoffrey Grantham
Sue Molloy
Odette Murphy
Nathan Brett
Anne Gillies
Alan Ruffman
Linda Christensen-Ruffman
Kathleen Hall

We would also and especially like to thank Councillor Zurawski for his remarks in support of social justice and inclusion on behalf of the #15 bus and its users. He pointed out that it is not just ‘numbers’ and rigid policy guidelines that should help determine the fate of the #15 bus.

Councillor Steve Adams and one member of our committee, Anne Gillies, were both interviewed at the end of the meeting by Pam Berman of CBC News. There was an item on CBC Radio this afternoon at approximately 4:30 p.m. about this.
What are the next steps?

The motion approved by the Standing Committee will now go to full regional council to be voted on, at one of these upcoming dates.
Tuesday October 30
Tuesday November 13
Tuesday November 27
Tuesday December 4

We do not yet know which meeting it will be. Members of the public will NOT be able to speak in support of or against the motion at this meeting.

Our only avenue at this point is to undertake a letter writing, email and calling campaign to try and influence city councillors to vote against the motion at regional council. We will follow up with you shortly to suggest how to contact councillors and some of the key arguments for not making the cuts. The campaign to influence councillors should start as soon as possible and continue until the motion is brought before the full council.

Thanks for your support, if you have any questions or comments please contact one of the following people. Also, can you please join our as we will be attempting to ensure better communications via that channel:
Purcell’s Cove Now
@purcellscoveneighbours
https://www.facebook.com/purcellscoveneighbours/