The November flowering is pretty unusual. There is lots else that is special about this plant and its setting in the Backlands. 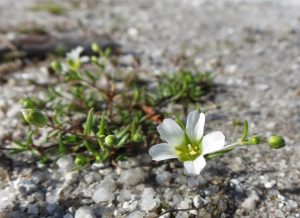 Birdwatcher and Backlands enthusiast Joshua Barss Donham forwarded this pic to me a few days ago, commenting that “Last Sunday, [we] walked out the trail that begins at the end of Princeton Avenue… to see the view from where the path comes out on to the barrens and overlooks the lower MacIntosh Run. While we were out there we came across this flower. I think that it is pine-barren sandwort… Wondered what your thoughts are.”

So here they are, and a bit more about the plant and its setting…

Mountain Sandwort has a northerly/alpine distribution, reflected in its species epithet (“groenlandica”), and “most often grows on relatively dry wind-swept exposures of acidic rock or gravel. In such habitats, it may be abundant forming extensive mats where the irregularities of the rock substrate afford it a niche” (Maine Gov. doc). In Nova Scotia, it is largely restricted to  granitic ‘rock barrens’. Mountain Sandwort generally has S3 conservation status (“vulnerable”) in the states and provinces where it occurs in eastern NA, including NS.  Both species are adapted to stressful, nutrient-poor habitats and can’t compete with other species in habitats where there is lots of soil, nutrients and water. 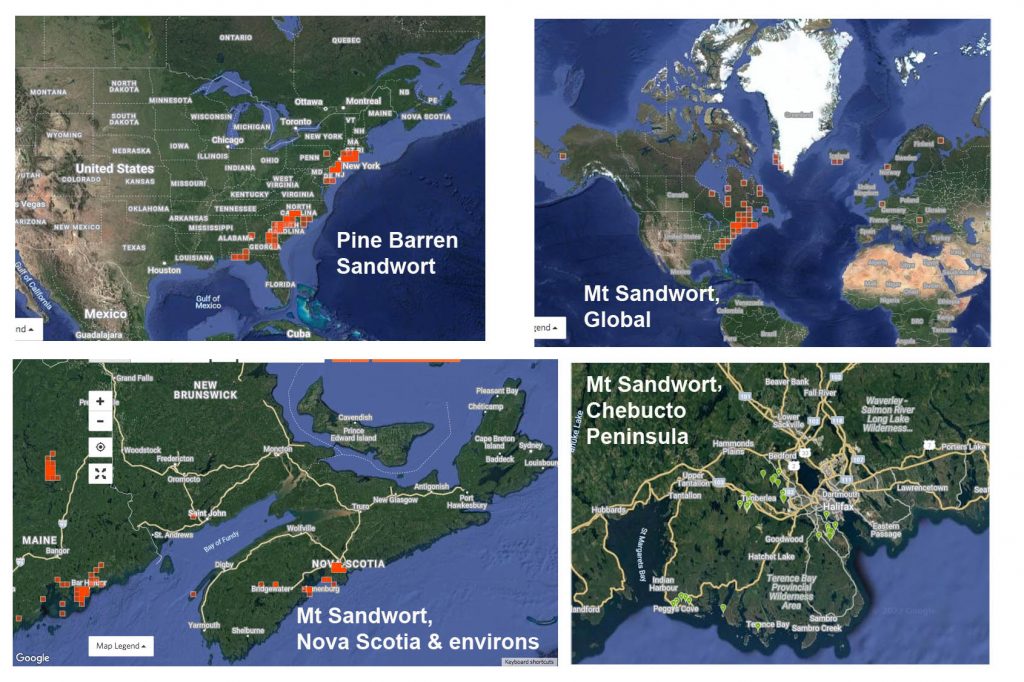 Occurrences of  Pine Barren Sandwort (top left), and Mountain Sandwort (other three) reported on iNaturalist. The Chebucto Peninsula (especially the Backlands)  is a hotspot for Mt. Sandwort!

There have been many sightings of Mountain Sandwort in the Jack Pine-Crowberry Barrens in the Backlands; it’s one of three plants species of “conservation concern”  (S-Ranks S1, S2, S3)**  occurring on those barrens; the others are Golden Heather (Hudsonia ericoides. rank  S2) and Burnt Sedge (Carex adusta, rank S2S3). ** Broom Crowberry (Corema conradii) which is very prominent on these barrens, while not currently of conservation concern in NS (rank S4) , is of concern everywhere else where it occurs, and populations are declining in NS. 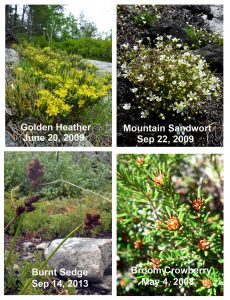 So the occurrence of this collection of species (Broom Crowberry, Mountain Sandwort, Golden Heather and Burnt Sedge) on our Pine Barrens is something to celebrate  and protect.

(ii) The late flowering, as Joshua suspected, is very unusual; the  normal flowering period for Mountain. Sandwort  is cited in Roland’s Flora of Nova Scotia   as June to August. Of course, it’s pretty reasonable to think that the November flowering in 2022 is  related to the very warm October-into-November weather we have experienced this year, another tangible sign that we are well into a period if not an era of global warming.

Of related interest re: Nova Scotia, plants and climate warming:

For more about Mountain Sandwort in Nova Scotia specifically, see 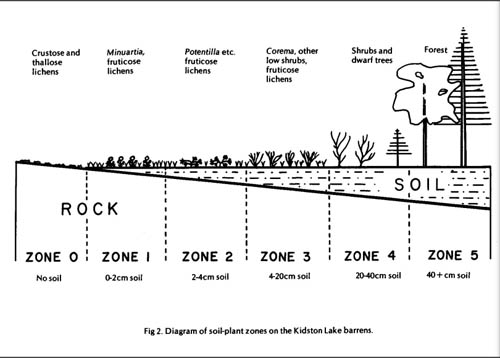 **More about the Conservation Ranks

“Species at Risk” in NS are protected under the Endangered Species Act. These include species that are ranked as

These correspond to “S-Rankings” of S1, S2 and S3 respectively. However, the legally protected species in these categories are a very small subset of the total number of plant and animal species assigned S1, S2 and S3 ranks by ACCDC, the Atlantic Canada Conservation Data Centre – see ACCDC Species Ranks. Most S1, S2 and S3 species haven’t made it to the official Species at Risk list   for a variety of reasons, chief amongst them is  that it’s  a very protracted process to get any species on that list.  But when Environmental Assessments are conducted in NS, the presence of any  S1, S2 and S3 species raises the ante on the environmental sensitivity of an area, so these species deserve special consideration whether legally protected or not.

The S-rankings are also be applicable to Plant Communities, but that use is just developing. Sean Blaney of ACCDC   describes our  Jack Pine-Broom Crowberry plant community  as  “Globally Rare, & Nationally Unique”. Bits of it are still being lost every year, so it’s pretty likely that  the  Jack Pine-Broom Crowberry community will eventually be formally recognized as a “Plant Community at Risk”. In the meantime, we can feel very lucky to enjoy it in our back yard – and do all we can to keep as much of it intact as we possible can. 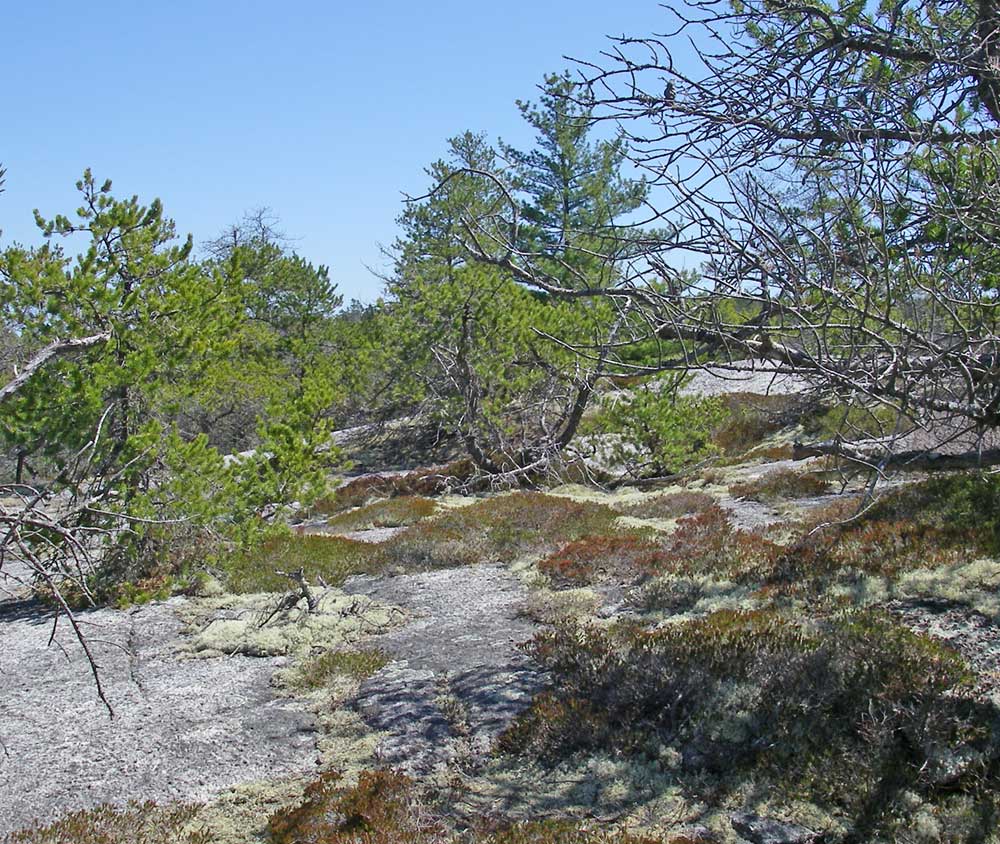 Jack Pine-Crowberry Barrens in the Purcells Cove Conservations Lands
have a garden-like ambiance.   Photo on May 4, 2009. Visible are Jack Pines, mats of Broom Crowberry, and Reindeer Lichens. Shrubs of  huckleberry are are present, close to the Jack Pines, but have not leafed out yet. Broom Crowberry is flowering.

PS: More from Joshua on the late flowering Mt. Sandwort: 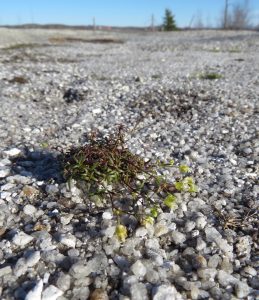 “I wanted to update you about the Mountain Sandwort at the Princeton Ave look-off. I was out there the last week and the plants that were in flower early in the month have produced seed heads and withered, but there are new small sandwort plants growing among the remnants of the previous plants. Have they grown up from the previous plant stumps or from seeds, I don’t know. The paper you linked in the sandwort post mentions plants that sprouting from seeds in late August/early September flowering by the first of October. Anyway, at least one sandwort was producing flowers … on the 23rd of November! I am careful of where I step when I am out there after becoming aware the sandworts.” – JBD Nov 30, 2022

And these pics, taken on Dec 1, 2022, commenting “Yesterday I went out to check the Mountain Sandwort, they’re still flowering, and found many tiny plants here and there … sure look to me as though they’ve very recently sprouted from seed. I also found a larger patch of sandwort in a different spot all together.” (Click on photos for larger versions) 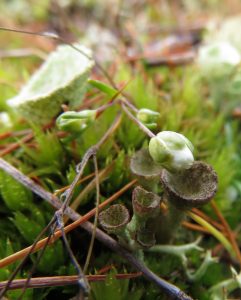 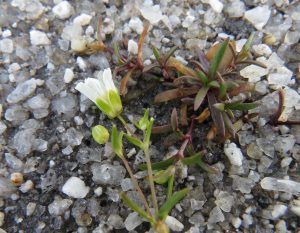 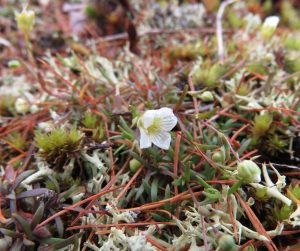 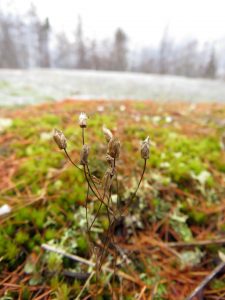 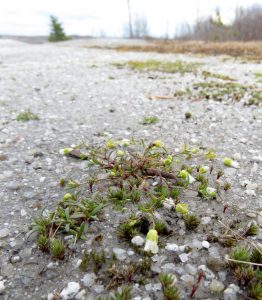 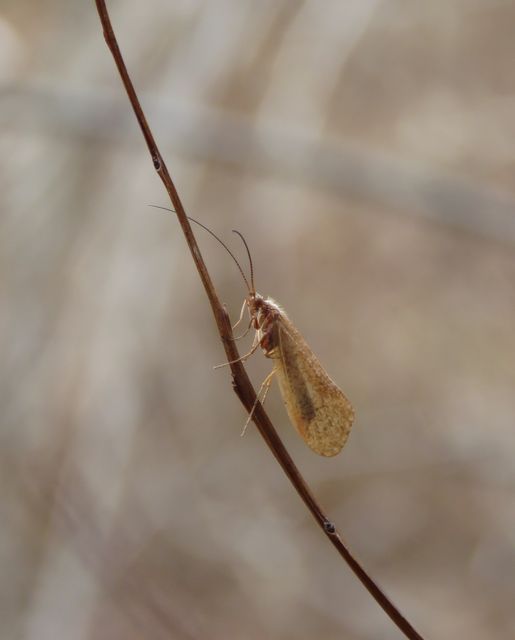