The Diverse and Magical Landscapes of Williams Lake Wilderness 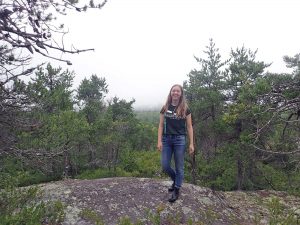 Meredith, Jack Pines in foreground,
foggy peninsular Halifax in the distance.
Click on image to enlarge it

That’s the title of an Nature Conservancy of Canada walk led by David P (aka Jack Pine) and Meredith Baldwin on Sunday July 29.

The walk had been delayed a week and the weather was quite iffy on the morning we finally did it, which is likely why only about half of the originally registered participants showed up. But it turned out to be perfect weather with a cool, very light foggy drizzle in the beginning offering some respite from the extra hot days we have been having; then there was cloud cover and a bit of a breeze and only as we approached the dam, did the skies clear and it begin to get hot.

We made 8 stops; at each I talked about what they would see ahead and a little about the human history. The stops were 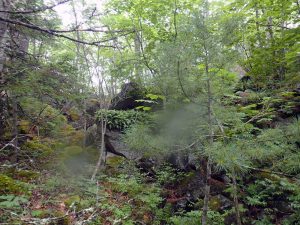 “The Gully”, a little water on the lens!

– On Oceanview Drive
– Overlooking the pond – the interface between habitats with mostly exotic vegetation & habitats with mostly native vegetation
– Across the pond on the first bit of Jack Pine/Broom Crowberry barrens (thence along the Military Road)
– The Battery (and then into the Bonsai Gardens)
– The platform/escarpment (and a view of Halifax, the “wilderness city”)
– The turnoff (before we descended through hardwoods and mixed mesophytic forest towards the contact zone between the granites and Meguma rocks and the associated watercourse which moves through wetlands, above and below ground, and finally tumbles as a stream into Williams Lake)
– The seasonal wetland above “The Gully”
– The Dam

At the dam, we paused for lunch and Meredith talked about NCC/HRM efforts to protect the area we had just traversed and how they could help. The participants expressed  their wonder and appreciation for the place.

Finally we departed via two routes to Purcell’s Cove Road. I took one group out via Lawton’s Brook which leads from Williams lake to The Arm.

We had been through arid Jack Pine/Broom Crowberry barrens, hardwoods, moist mixed Acadian forest, walked in a seasonal wetland lined by Royal Ferns, down by a tropical-like gully with its canopy of Striped Maple and boulders covered with Polypody Ferns, up and down pieces of drumlin with big oaks and pines, and then through Yellow Birch/White Pine dominated old forest alongside a magical stream with its mini-waterfalls and inviting pools… all within a few kilometers of downtown Halifax. 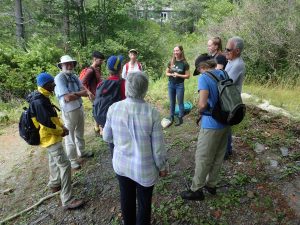 While we were at the dam, I thought it appropriate to read the following, on the final page of BEYOND THE NORTH WEST ARM” A LOCAL HISTORY OF WILLIAMS’ LAKE, HALIFAX, NOVA SCOTIA written in 1968 by Heather Watts:

The 200 years of recorded history on Williams’ Lake have never produced problems as critical as the ones we must face in the next 20 years. When someone climbs Mount Misery in the next century will he see the lake with its essential usefulness and beauty undiminished and appreciated? We hold the answer in our hands

Indeed we do and hopefully we will soon be able to say:

“When someone climbs Mount Misery now and into the next century, she will see the lake with its essential usefulness and beauty undiminished”.

This entry was posted in Urban Wilderness Park. Bookmark the permalink.