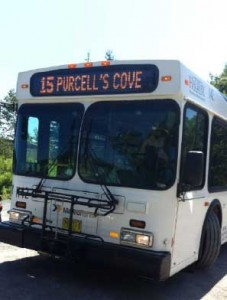 Those affected by proposed changes to Halifax Transit’s Route 15 bus are holding a rally to save the service and increase ridership. Right now the bus travels hourly from Mumford Terminal, along Purcell’s Cove Road, to York Redoubt and back. A proposed change would see the route turn at Williams Lake Road and continue to Spryfield, leaving the entire area from Williams Lake Road to York Redoubt without service. This would leave approximately 450-500 households without public transportation.

“I rely on this bus to get to my work and clients every day. Without this service, I will be forced to get a second job to purchase a vehicle I can’t afford simply to get to my main line of work.” says Danyele Belliveau who uses the bus every day. “People along this section of road pay the same taxes as everyone else in this city, and it would not be fair to take this service away.”

A petition with more than 300 names was tabled with Halifax City Council in June. A final decision is expected sometime in the fall.
“We’ve heard dozens of stories like Danyele Belliveau’s all over our community, or from those who have teenage children, or one car households, who rely on Halifax Transit as part of their transportation mix,” says Nathan Brett, Co-Chair of Purcell’s Cove Neighbourhood Committee. “We are doing everything in our power to convince city council and Halifax Transit to continue public transit service along this section of road.”

There are also businesses and organizations in the area that will be affected. “The #15 bus is an integral component of our operation which employs close to 100 people during peak season many dependent on transit for employment,” says Kevin Hurd general manager of the Royal Nova Scotia Yacht Squadron, “The #15 bus also allows us to successfully bid for and host high profile Provincial, National and International events bringing thousands of visitors to our city and province on an annual basis. The RNSYS is home to Canada’s largest disabled sailing program and the training facility for local Universities and the Provincial Sailing Team. Many of the athletes in these programs rely on public transportation.”
Route 15 is also an important alternative for tourists and other recreational users to get to popular scenic areas like York Redoubt, picturesque Purcell’s Cove along with popular swimming and hiking areas.

This entry was posted in Uncategorized. Bookmark the permalink.