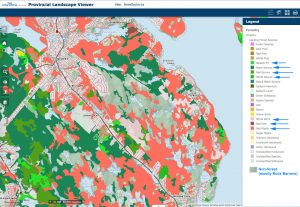 I have had a few questions recently about the types of forests in the Backlands which prompted me to make some screen captures from the forestry layers on the NS Landscape Map Viewer. Those maps and some additional maps showing water flows & wetlands are posted  on this website under Flora Fauna and Geology – DNRR Maps. (DNRR: NS Department of Natural Resources & Renewables).

The maps are based on interpretation of aerial imagery, not ground observations although such interpretation is calibrated by ground observations. So there can be differences between what you see on the ground and what’s in the maps, which for the Backlands are based on 2017 imagery. For example, there can be errors at the species level in the description of forest vegetation, e.g., the Leading Forest Species is correctly identified as a softwood, but on the ground it proves to Red Spruce rather than Black Spruce.

Another example: a large area in the Leading Forest Species layer (shown in image at top right) is identified as “non-forest” (mostly rock-barrens) but quite a bit of that is actually forest recovering after the 2009 fire – it’s just that in 2017 it had not grown enough to be recognized as ‘forest’. Also the forests can be quite patchy on that landscape and so not meet the criteria for classification as ‘forest’.

So use the maps as a helpful guide, and if critical, verify the info. by ground-truthing.

For some comments on the Types of Forest found in the Backlands, see Flora, Fauna and Geology/Forests.