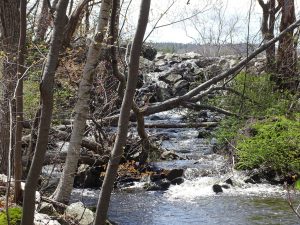 Lawson’s Brook carries the outflow from  from the dam on Williams Lake down to and then under Purcell’s Cove Road and thence into the Arm on the Royal Nova Scotia Yacht Squadron property.

On May 11, 2021, I observed several Rosa multiflora plants just below the dam. Fortunately they are quite young plants and can easily be cut back. I recommended just that – and removing the cut stems so they don’t get washed downstream to create more plants – to the Williams Lake Conservation Co. and they were removed within a week. Now they will need to monitor the site periodically and cut back any regrowth before they produce flower and fruit. It could be quite destructive to attempt to pull out whole root systems here and/treat stumps with glyphosate, but cutting it back combined with monitoring is a practical alternative when the infestation is caught early as in this case.

I also checked the watercourse down to Purcell’s Cove Road, there was none present except for some large plants by Purcell’s Cove Road – these could have been the source of the plants by the dam, perhaps moved there inadvertently when the Shaw Urban Wilderness Parking/trail were being constructed. (The Japanese Knotweed and Japanese Barberry that we noted by lower Lawson’s Brook in 2013 was still there.)

I never paid much attention to Rosa multiflora  until in 2007/2008 I viewed it climbing over trees near the model railway in Windsor, NS, and rampant in pastures in the area of Smiley’s Park. I observed those occurrences in early July when it is in flower and highly visible. Since then I have kept an eye out for it in the Halifax area. It wasn’t until 2012 when I began to see occasional infestations such as I had seen in the Windsor area, e.g. along sections of route 333.

Currently   R. multiflora is well established and out of control in some areas of HRM, is just getting going over perhaps 50%, and still absent over the rest of HRM. (View Multiflora rose, an invasive that crept up on us in Halifax, NS for more details.) 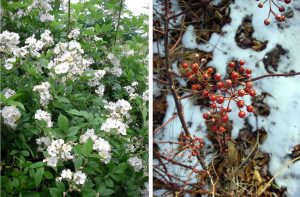 Two stages in which R. multiflora is quite readily viewed in Halifax area – left when it is in flower, early July; right in winter when clusters red berries stand out (if not already consumed by birds)

R. multiflora is socked in over about 1 ha in wettish forest in Fleming Park close to Frog Pond, illustrating its invasiveness in that type of habitat (observations in early, July 2018) – hence my concern on seeing it by Lawton’s Brook. Based on some practical experience, I have suggested that “where R. multiflora is already well established it would be very hard to bring under control, and I am not sure there would be any great value in doing so. On the other hand, where it is not established or only a few, smaller plants occur, it can be kept out quite readily with hand clippers and a little year-to-year vigilance.” – View more about control.

Full Disclosure: I have pretty much been a lone voice in expressing concern about the spread of R. multlflora in HRM, so it’s OK to be skeptical. In 2016 I documented occurrence of R. multiflora in Point Pleasant Park and followed that up with my Councillor/member of the PPP Advisory Committee over the next three years and subsequently, related to that or not, PPP personnel removed some large infestations and many or most of the smaller infestations I had identified.

But the best way to get a feel for what R. multiflora can do is to become familiar with the plant and simply look for it when walking about. The best time to do that is  in early July when it is in bloom and easily picked out.

I have created a “Project” for Multiflora Rose in the Halifax Backlands on iNaturalist that encloses the Backlands and a fringe around it, so if you upload pics of any R. multiflora within that area to iNaturalist, they will appear on this project page. It is definitely under-represented in the fringe currently (June 5, 2021).

Screenshot from iNaturalist Project, for June 5, 2021. The ‘Backlands’ are the undeveloped lands lying within the polygon created by Williams Lake Road, Herring Cove Road and Purcell’s Cove Road

– Multiflora rose, an invasive that crept up on us in Halifax, NS
David Patriquin on sandlakebedford.ca, Aug 9, 2019

– N.Y. Invasive Species Information: Multiflora Rose
Description of the species, its impacts and how to control it.

– The distribution of a non-native (Rosa multiflora) and native (Kalmia latifolia) shrub in mature closed-canopy forests across soil fertility gradients
Cynthia D. Huebner et al., 2014. Plant and Soil Volume 377, Issue 1–2, pp 259–276″Our research documents the importance of soil fertility as a predictor of the establishment of invasive and expansive shrubs. This study further shows that R. multiflora can establish and spread across a broader range of soil conditions than K. latifolia.”