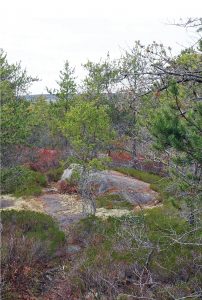 The Nature Conservancy of Canada is making appeals to help them (us) to cross the finish line for financing of the ‘urban wilderness’ park on the Clayton lands in the area of Williams and Colpitt Lakes. An $8 million project, it is now 95% there. View Soon-to-open Halifax Wilderness Park needs $375,000 to unlock final federal funding by Nicole Munro for the Chronicle Herald July 11, 2019. 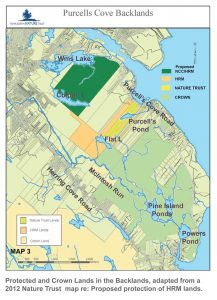 The Wilderness Park lands
are the largest privately
held property in the Backlands.
Protection will facilitate
connectivity and protect
the key urban-wilderness
interface at the NW end of
the Backlands

It’s been a long stretch from the days back in 2012 when we learned that this largest block of privately-held land (approx 375 acres, 153 hectares) in the Backlands had been sold to a developer.

Flash forward, and now it is about to become an ‘urban wilderness park’ which, as well as being a phenomenal asset in its own right, breaks new ground in several respects: a developer moving from wanting to develop the land to wanting to protect it; HRM contributing significant funds to the purchase of privately owned land for protection; and the Nature Conservancy of Canada getting involved in planning, managing and financing an ‘urban’ wilderness.

Of course that all began when the local community turned out in droves to protest the proposed rezoning and development, and many thoughtful and committed citizens worked to find a solution. 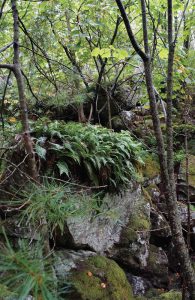 “The Gully” has a
tropical-like ambiance in
summer; the beautiful polypody
ferns are evergreen and provide
striking contrast against white
sow and ice in winter.

In the process, many of us “discovered” the Backlands, myself included, and gained a new appreciation of just how special an asset the Backlands are locally, for HRM, for NS and indeed, even nationally and globally.

There was an important, if smaller scale, precedent for the land acquisition and protection – the Purcell’s Cove Conservation Lands, two blocks of land (30 and 57 acres) donated by local family landowners in 2003 and 2009 to the Nova Scotia Nature Trust.

Also helping was the evolution in HRM’s planning and citizen interest/involvement in such planning (in the latter regard I am thinking of OurHRM Alliance): it was being recognized that concentrating development on already serviced areas actually reduces costs to taxpayers and simultaneously allows more conservation of wild spaces for both recreation and for wildlife.

And then there was a bit of serendipity, in this case that the particular developer was not obstinately committed to development, recognized the unique natural values of the area for conservation and recreation,  was willing to negotiate and finally became a key ally in the quest to protect the area. 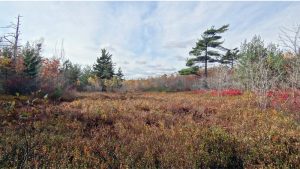 That’s a pretty cursory and incomplete history of what has happened over the last seven years, but I offer it to make the point that we got where we are because we did not take anything for granted, with some serendipity thrown in. We just need a little more of not-taking-anything-for-granted to cross the final stretch on this one (pls contribute  as you can) – and to keep on going to ensure that we maintain the Backlands as a whole as the wonderful, unique natural asset that it is today.

This entry was posted in Community, Parks and Protected Areas, Urban Wilderness Park. Bookmark the permalink.